HHG hope is going smoothly on the home front,

Hey appreciate it brother. Everything is peachy cream here. Finally got my second see to break ground today, complete with, hopefully “her” helmet head on… lol 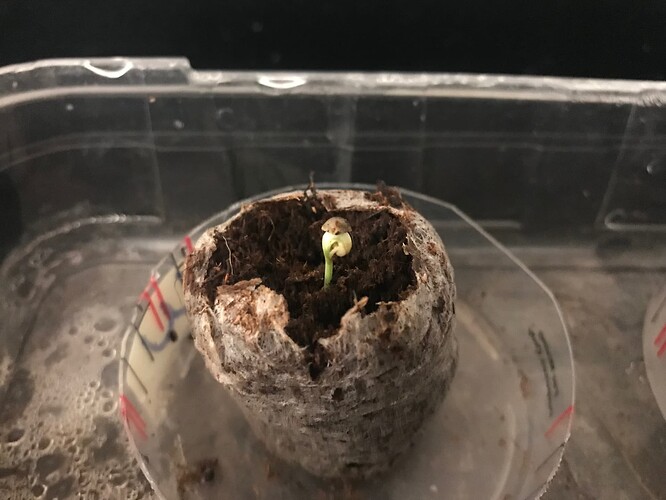 When buy a chiller, it’s important to know the rated gph on it as well as pairing it up with the right size water pump to go with it.

My chiller is rated for as follows.

My water pump is rated as follows:

So if you have two 12 gal containers, that means by the time you hook them together, pending on short distance between the two, you’ll have about half the total of both totes, (12 gal roughly). So IMO, yes, it’ll work. Just make sure you get the right water pump.

Also, if you plan to expand, then you might want to go a little bigger.

Thanks HHG , you know I appreciate the education, I plan on going bigger at a later date when i remodel the house, i plan on dedicating a 10x9 ft space built specifically to grow in , with fan forced exhaust vents thru the roof, i. Also thinking of putting a straight water line in as the laundryroom will be on other side of wall.
What im wanting to set up now something smaller just for my 3x3 for now. Guess ill be doing one at a time for a bit . .looking to make res changes easier for and get rid of plastic ice bottles. So i appreciate your help my brother.my lemon was a helmet head as well, im sure she do fine

She still got her Sunday hat on

Chiller is a costly part of the system, if you can help it i would get what you want for end game. At worst the overpowered chiller will run less/be more effective. As an example i have a 1/2 HP that has a max flow of 900 GPH or so designed for greater than a 100 gallon fish tank, but this was $1,000. Dont go over the max flow rate for any of them, it will blow the seals inside.

I appreciate that Jarlax, im just trying to get it all figured out. I still have pieces of the puzzle to put together, just trying to get some sense of what kind of system i want planningvstages but i do have a 3x3 i need to do something with

Not sure what kind of grow medium you planned on using, or net pots, or goals. You could use the 3x3 for younger smaller plants and overlap grows a little if you wanted that. If you grow in rockwool, you can start the plants and grow them about 5 weeks from seed in 3" cubes. That method could save you a chiller because you water them like dirt. Then transfer to net pot and fill the void with the small cubes when they get big. Most dont use rockwool because algae challenges, just mix 2ml per gallon barley straw extract into nute solution. Harmless to everything except algae. People make rafts out of barley straw and float them in fish ponds for the same reason, works great.

“her” helmet head on

When my plant came up, I had to mist the helmet to soften it and chip it off with a tooth pick. 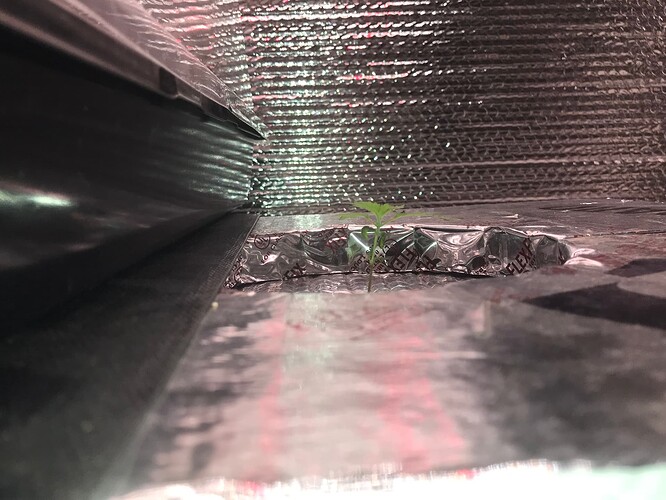 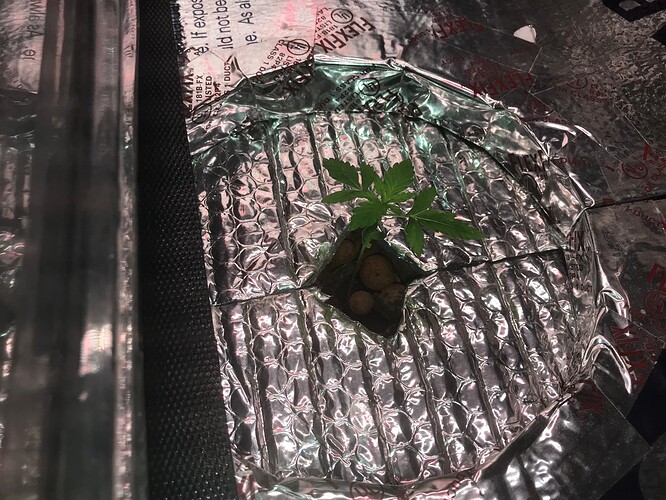 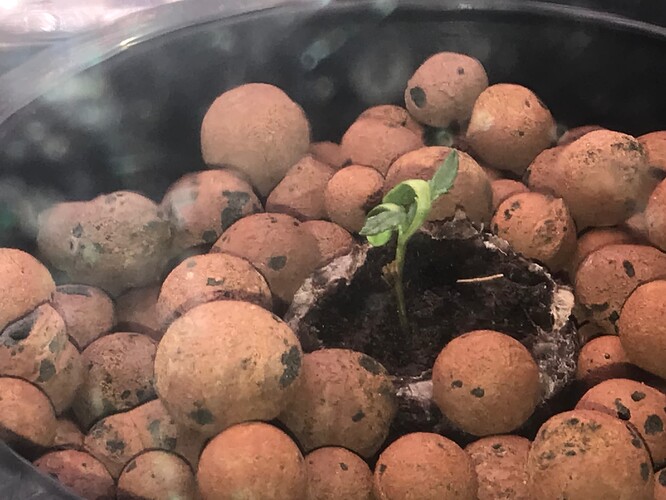 Consultation today with Dr to find out more about my colon surgery… Ugg!

Hope everybody has a great week and keep’em growin!!

Nice!! Hope everything goes well with the Doc

Definitely, best wishes at the doc✌️

Good luck @HappyHydroGrower with the doc. I had emergency colon surgery end of March, and when they tell you don’t lift more than 10 pounds for the next 12 weeks, DON’T! I overdid it and it sets you back weeks in recovery. Even after 5 months, I went and did 3 hours of shoveling dirt, crippled me for 2 weeks! And I’m young (58) and in good health/shape!

Hope everything went well at the doctor Happy , i have my knee surgery this friday not looking foward to that ; was hoping to have new set up piped and ready to go before then but rest of suplkies wont be in till late Thursday afternoon. So ill probably be setting next saturday. Hopefully you’ll be around, do you know when your procedure is scheduled for? Dont want yo be a pain while youre in recovery brother. Also have a question regarding jacks nutes what do i need to get if i switch to jacks, i like the eay your res is clear with tbe nutes in AN PH PERFECT ( used last grow) leaves a brownish tint to everything

In 2 weeks theyre taking the right half of wifes colon. Sorry you have to endure this.

Thank you brothers for all the well wishes. Thankfully as it turns out, surgery is not gonna be necessary right now.

@Spudgunner I feel like I’m in good shape for the most part. I’m about a year older. I really didn’t think I needed it. They pretty much told me I was gonna need it last time I was there. Time will tell. Sorry to hear about you and @Allinherhead both.

@robert365 hopefully you can make a speedy recovery.

Normally i use in this order:

In about 2 gal of water, in a five gal bucket, I mix enough nutes for 22 gal of mix.

During veg I like to run 1/4 tsp/gal of armor si.
Starting third week of 12/12, I go to 1/2 tsp/gal.
Two weeks before harvest, I stop using armor si altogether.

IMO, anything more than 1/4 strength of armor si during or before the transition makes the branches too stiff to train.

After mixing that in a separate bucket, I’ll get another bucket and mix the nutes. Again, enough for 22 gal.

After all is mix thoroughly, I pour armor Si in the res first, followed by the nutes. Then top off my res to predetermined water level. Then add 1/2 tsp/gal of hydroguard. It doesn’t matter if you add hydroguard before or after pH’ing. Hydroguard does nothing to the pH or ppm’s.
I let all that run through the system for about an hour. Then adjust pH.
Next sit back and watch’em grow… whewww!… I’m beat…lol

FYI, I mixed up full strength nutes last Monday. I did not check the nutes until today.

Both probably went up because I cut the water temp up from 68 to 73 because I don’t have roots in the water yet. No sense in wasting electricity. I also have the exhaust set on low because I’m not burning off oxygen. Another thing, evaporation of the water and water bubbles and will cause pH to raise some.
Once the roots hit the water, everything will stay where I set it for the most part with very little fluctuations if any.

Thanks again for all y’all’s support!

@robert365 if you will keep in mind, there are many ways to run Jacks as well as others brand nutes. My way may not be the right way for others. So many factors that can affect the outcome. You will figure out what works best for you in time.

@HappyHydroGrower Yeah, they wanted to take my sigmoid colon out 4 years ago as I have diverticulitis. Like 70% of old people! The pain comes and goes, but if I’m good I can sorta control it thru diet. But they ruptured my right colon during a routine scope and that emergency surgery messed all my stomach muscles up. Now if I overdo things, I suffer for days. Good thing I don’t do physical labour! Had a desk job so that was good, and I retired last month, even better!
Don’t get surgery unless you really need it, too many things can go wrong and you can end up shitting in a bag. That’s my biggest fear, so I try and take care of myself. Make sure you do too! And hoping you don’t eventually need it!

Hey brother, I really appreciate you sharing that. I know a lot of folks have IBS. They told me I have that several years ago. But, when they told me I would have to have surgery, that sucked big time. I thought I had been doing good, especially after changing up eating habits and stuff.

I retired 3 years ago and we are always working on our house and yard and just enjoying life. We got so much going on, I could not imagine being dragged down for another 6 months to a year, especially after going through melanoma 2 years ago, back problems, and more stomach problems. I finally feel good again because of diet and whatnot and then they tell me I’m gonna be knocked down again… shezzz!

So, after CT scan, surgeon says I’m a good candidate for it but it’s my choice…. huh?

Let me think about this for a minute… not!

Whatever! I was delirious with joy when the said not necessary right now. Just hope I can keep it that way. I know it could always be worse. Thank goodness it’s not. Thanks for the encouragement.
And again, thanks for sharing that.

@robert365 you wanted to know how I do my scrog. This what I have to do and how I’ve updated it to make it adjustable.

Start out with a tote with water. 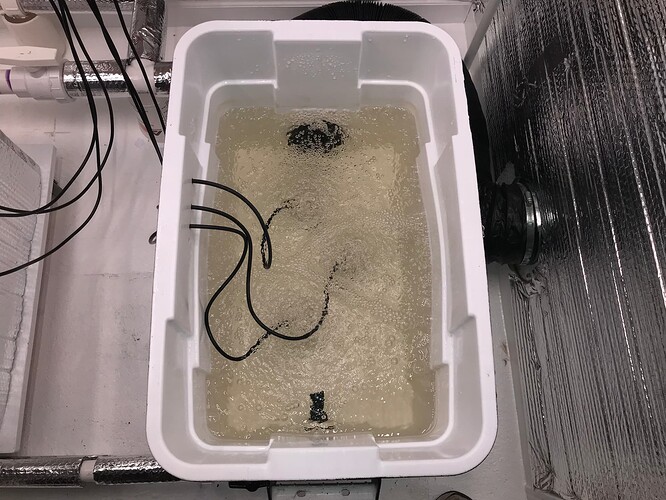 Add lid with hole near the back of the lid so the plants roots have plenty of room to grow. 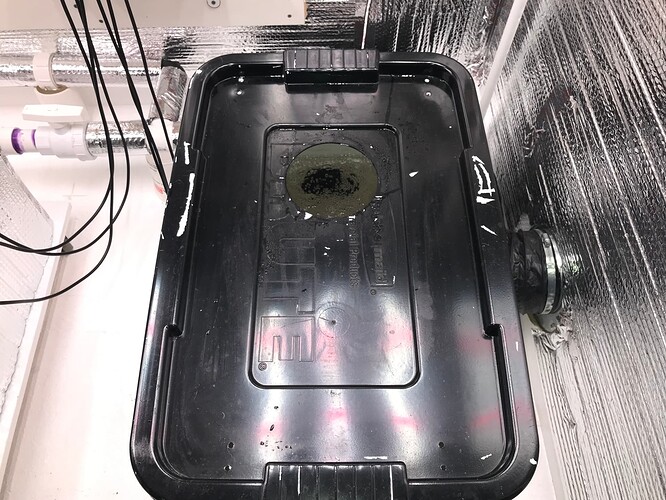 set your netpot in the tote. 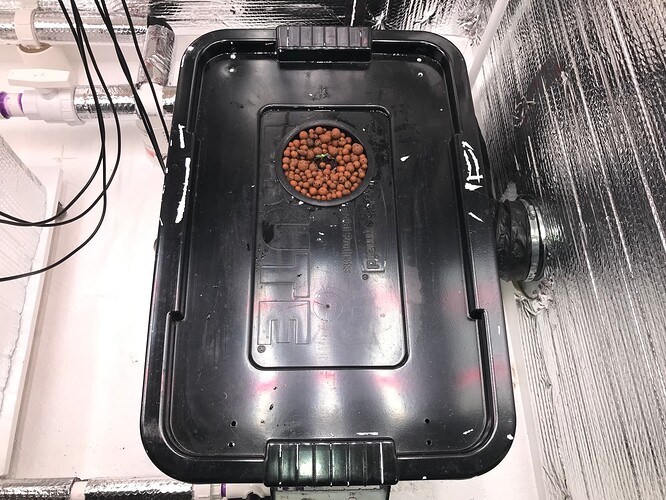 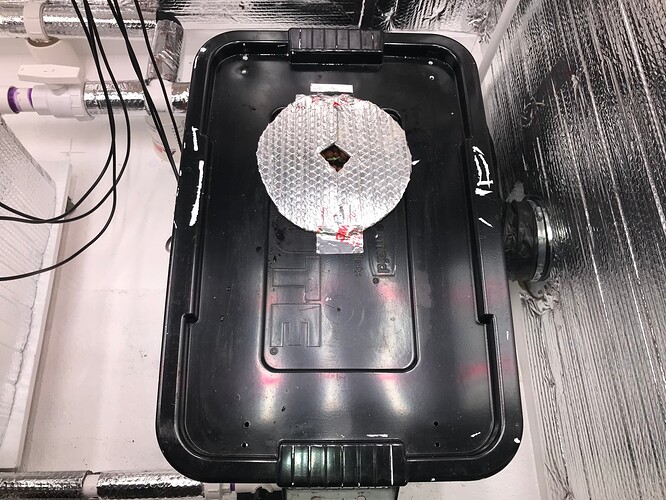 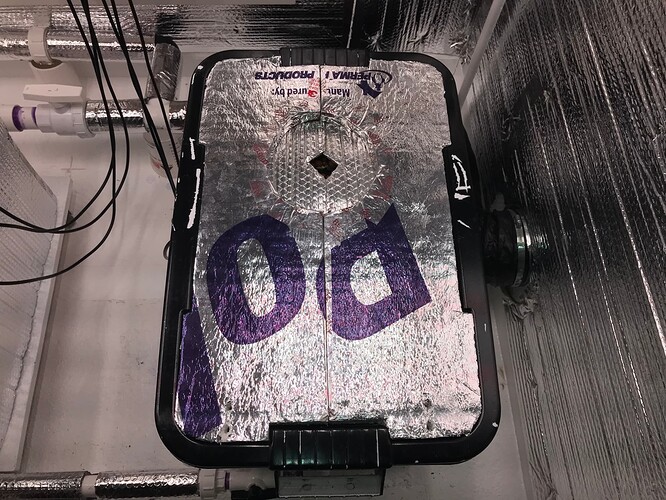 Cover the rest of the tote with reflectix. 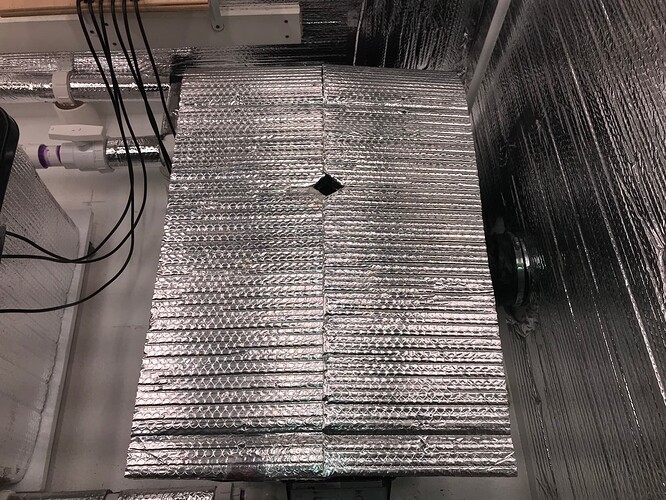 Drill hole through the tote lid to attach base frame. 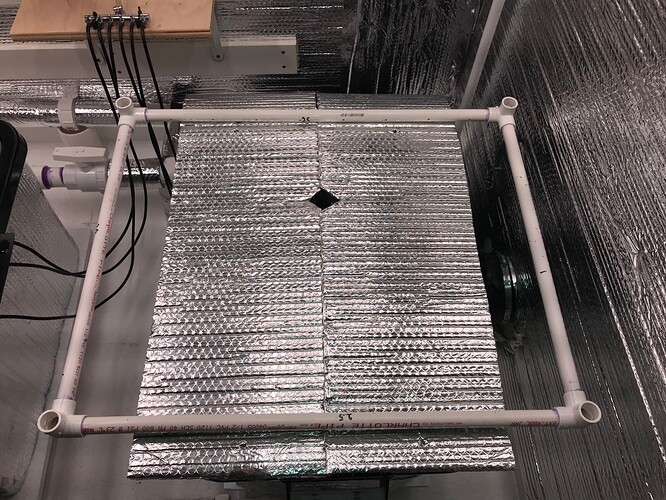 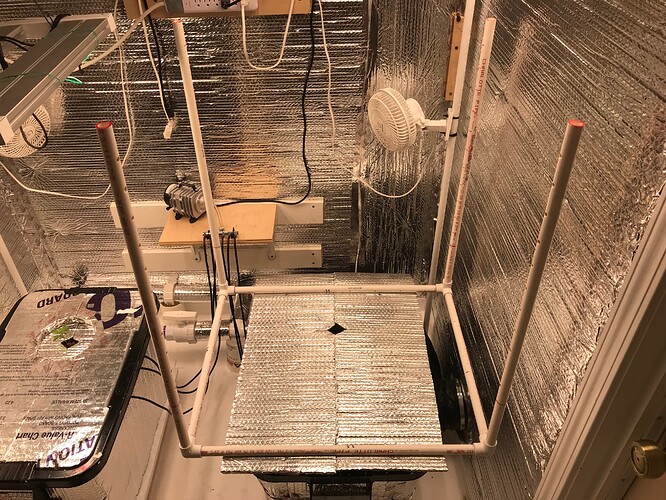 Add first scrog to desired height and attach through holes. 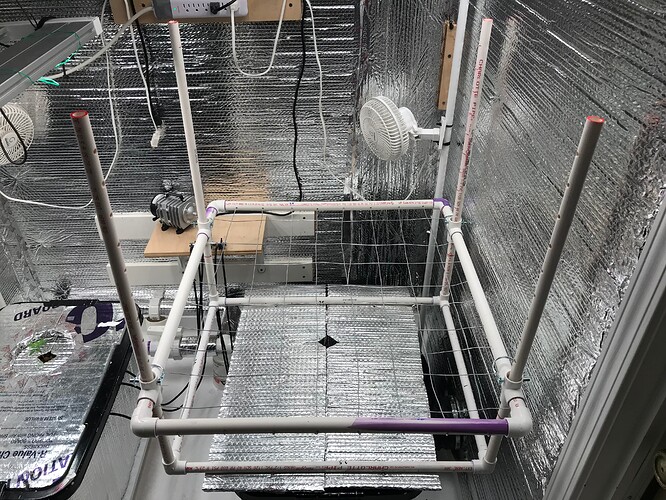 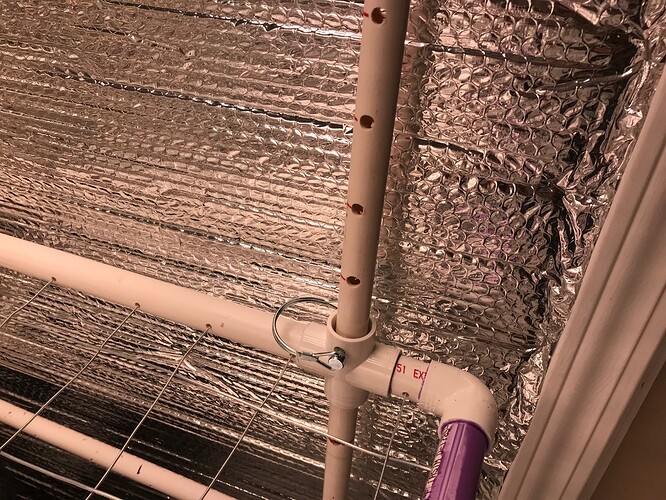 Add second scrog if needed and attach through holes.

In about 4 or 5 months, I’ll have something like this hopefully. 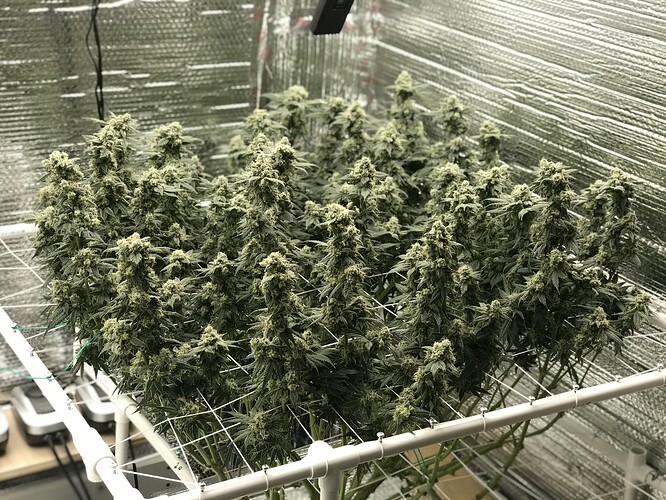 @Chrisr36 and robert365 hope this gives you an idea or two.

Loving that Happy, very user friendly. You can lift the hole plant off the tote if need be. Loving the height adjustment holes for the nets.

Hoping you the best with the health brother. You guys are seriously making me rethink my health strategy.