Anyone use trace minerals?

Man I been chasing things and I just added some trace minerals like 2 days ago and BOOM!!! Growth like a motherbleeper! It was just some supplement for humans but it has like fluvic acid .

I just wondering if anybody else noticed like immediately a difference?

Good I’m not the only person who does that haha I’ve used calcium and magnesium supplements, seen they used the same Ca and Mg as plant food. So should be available. I think I seen a difference but I got nothing to compare it to. I’m going to buy some minerals soon as I see some on clearance sale again and try other micros

@Jaysittinback haha! Yeah I already use some CalMag because I read someone else was using with the jacks 321. I actually ordered this stuff because I couldn’t figure out the internet at the time (had to much medicine lol) 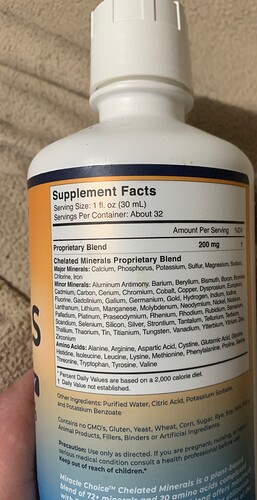 Chelated that’s good. Looks like a ‘90 For Life’ type of thing… Doc Wallach and his 90 essential nutrients… found out from him our bodies use arsenic. That’s expensive stuff ain’t it, and some of them good minerals might be going to nothing.

It’s was 32$ on Amazon . Like I said I ordered something while I was a bit tired but it looked like it worked??? I couldn’t find anything specific to plants. It just keep giving me organic plant base supplements haha.

I just opened the tent and the horizontal growth! They got like thick. After I did like a like a 1/16 dose of what that bottle said. Man that why I’m asking , do people use these and if they do what is it in them doing? I haven’t really seen people mention trace minerals. Is there a better one for plants

What is it I’m missing in my nutrition program that that bottle has in it?

I got a hunch, chelated minerals made for people are good for plants too. Especxially when ya get into the zinc and manganese and all the less common ones, they are defecient in foods because our soils are defeceint and I want to see if they help boost varieties of terpene production like they help fruit and veg make more colors and flavors

example there molybdenum, our plants don’t get much because poor availability with the pH we all run so maybe a chelated moly gets eaten and shit out by germs and the plant takes it

Dude that’s interesting! I’m using bacteria and fungi , you think it makes a difference usning coco/soil? I am running side by side and both like exploded. Had Jacks Co test my water. Sodium too high so they said half it.

I’d like a water test. Before I blame myself for seeds and sprouts dying couple months ago.
Coco/soil I think of as soil, coco is just to get the texture and moisture properties right? And bacteria and fungi yeah the fungi increases the surface area of absorption of roots and helps the uptake of many more nutrients

So to keep it simple and before I go Down the rabbit hole on this, you think I should keep giving the plants trace minerals ?

I would and use it diluted weak, I’d like to check pH with it, and if there’s nothing in it that cannabis is too sensitive to like sodium but you seem to be ontop of that so yeah I would use it.

Man it really helps to be able to communicate this stuff rather than be in dark with your own thoughts haha. Thanks @Jaysittinback

J.R. Peter’s makes a product called M.O.S.T. (mix of soluble traces). I thought about ordering it when I was getting Jack’s a and b.

See ya down the rabbit hole. Yeah thanks bro I think people don’t wanna talk about it for lack of evidence, studies, and so on. Not like we’re flat-earthers. I’m not anyway…