If you’re pulling 900w at outlet you’ll be good. Great choice on the light. I’ll be watching to see the outcome. @Newtogrowing92

what exactly should i be looking for then moving forward so i know for future reference?

I operate off of the bud shape and structure. @HappyHydroGrower has described it as “Bud swell”

An immature bud will look kind of small, the bracts (the teardrop shaped green things the pistils protrude from, often people mistakenly call them calyxes) will be round at the base and taper into a point. Once they mature, the bract will swell and take on a more bulbous shape and less of a teardrop appearance. 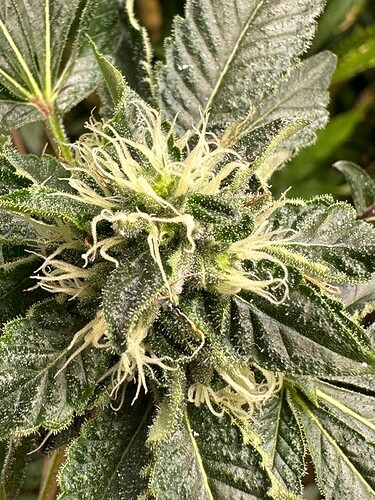 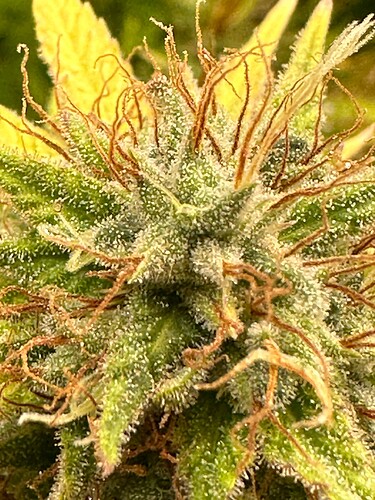 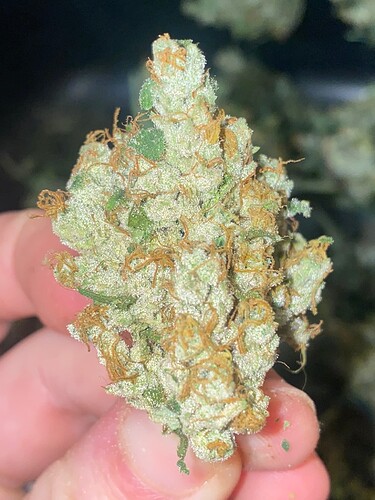 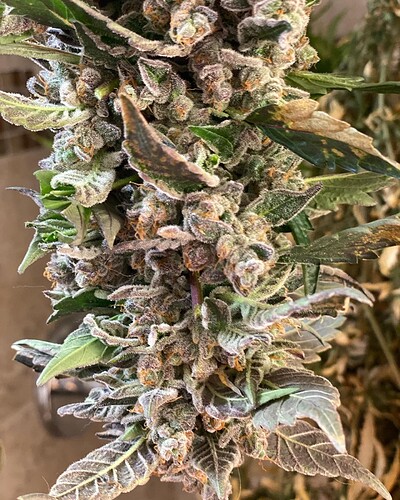 Alright ill just keep an eye on it over the next 2 weeks and keep this updated, as i kind of see what you are talking about but dont feel confident enough to make the call on my own

what i read online 8 weeks is the usual for autos.

“They” make it confusing about what they actually mean. It is a sales pitch that is technically true but not really what you want. While you can harvest “something” that is, strictly speaking, marijuana bud, it is nowhere near ready at that stage for the vast majority of home grows.
A better target, and some sites are honest about it, is 8-10 weeks from start of flower is about as early as you even want to consider. Expect around 4 full months or more for an auto to go seed to harvest.

I wait until virtually all the pistils have darkened before even looking at trichomes.

This pic is from about a week ago (I think). She has been flowering for about 7 weeks and I plan to chop this one around the 5th but it may be even later than that. 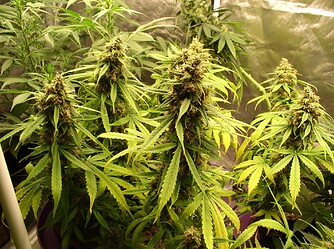 That is really hard to do TBH. “Late” is far preferred over “early”.

@Graysin @HMGRWN now when all the pistols trun amber will it still have milky trichomes? As i want to catch before most are amber. As while the couchlock is nice for my back pain and sleeping it does not help me get stuff done through the day lol. I plan on doing half and half. The skittles for day time the banana kush for nighttime. And it being my first grow im not sure how long trichomes stay milky before turning amber. As theres only from what i see 1% if even that. That are currently amber

will it still have milky trichomes?

As the bud swells, those first bracts you are seeing will get “swallowed up” trichomes and all, becoming the center. That is why we don’t recommend checking the trikes before the bud is done swelling and very few new pistils are emerging. New bracts and fresh, immature trichomes are still being formed.
Best advice for that uplifting, energetic high without the paranoid jitters that come from immature weed is to stick with Sativa dominant or straight Sativa strains and let them ripen fully. Indica is often the higher THC but is notorious for that relaxing “body” high and couchlock. Check the descriptions and select the strains that have the expected effects you want.

Don’t you use kingbrite anymore?

Okay goctha. That’s what i was worried about but now that i know new ones will form thats eases my mind some. And i had picked the skittles due to the tatse and smoke and its description stating that it gives an uplifting high despite it being an indica dominant strain. And the bit i got from the dispensary had done so as well. It was roughly a half and half about an hour or so if energy then a bit of relaxation afterwards which i found to be a good combination.

I sure do! I have HLG, KingBrite, and green beans.

The price is right on those green beams!

half and half about an hour or so if energy then a bit of relaxation afterwards which i found to be a good combination.

I grew a zkittles last year and it was one of my best grows! Really tasty buds that grew fat and wide kinda like a pyramid.

I have this one, too. Can confirm it’s good. Great picture on my Mac.

So they are still going. I did cut some lower buds off and dried out to smoke didnt have much taste im assuming due to the fact i didnt flush and it didnt cure but damn was it one hell of a head high. Thinking of starting flush on tomorrow’s watering then harvest the oldest skittle next week the the others in 2 weeks as they are about a week and a half behind in time since sprout. The banana kush are starting to get super frosty and smells like some straight gas. Im estimate roughly another 6 to 8 weeks on those ones. Included a pic of them as well as one from my new grow 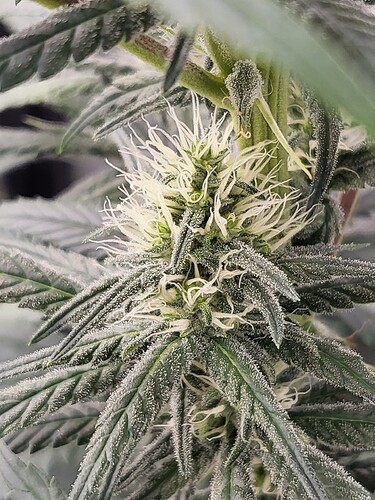 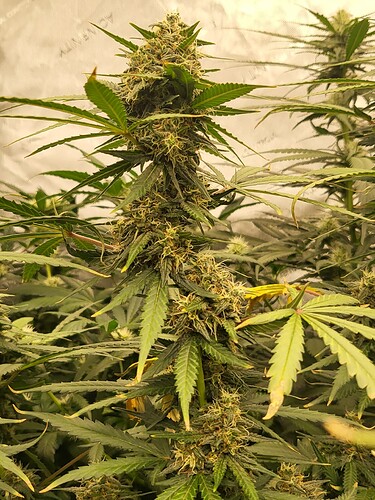 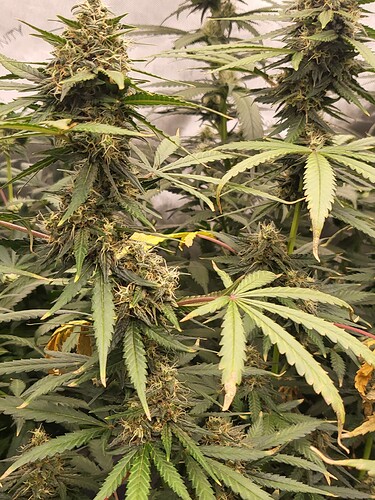 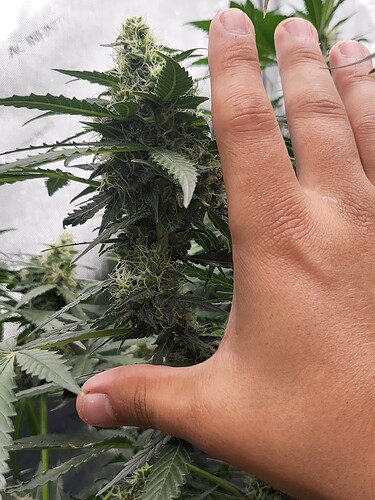 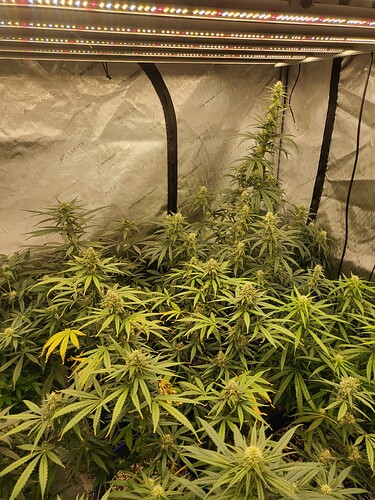 I’d say give everyone 2 weeks, the youngest may want 3. But it’s probably fine to start water only.

It still looks like they’ve got some bulking to do.

They bulked up some then stop but most hairs are orangish now. And all the leaves are dying on the oldest one so i think shes pretty much there. I figured one last week. Read online do a day of darkness beforehand to increase thc but worried about it affecting the others. The oldest skittle auto looks like its going to be prolly 3 to 4 ounces which from what i gathered are about on par per plant for an auto. Now come chopping time im putting into a dark dry spot like a closet right? I dont want any light?

Okay so then i shouldnt even bother with it then, especially since they arent all synced up on harvest times