Yo snobbery is gonna give ya salty weed 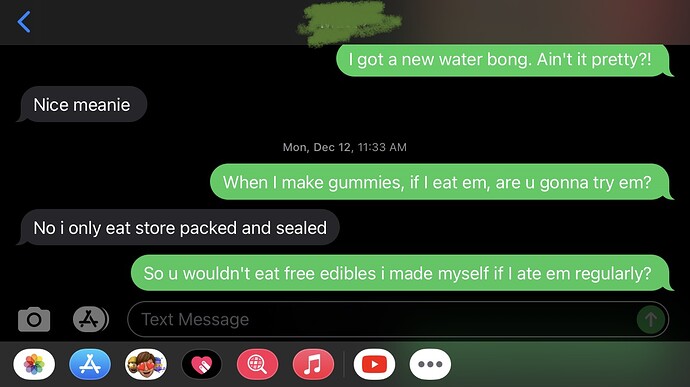 Why is my brother a big ole snob?! I mean, I’m not the one who rolled him a spliff of catnip. That was my cousin. Yes, she did. I’ve never done anything to him, not even in retaliation to his own agitating nonsense.

How u gone turn down free edibles if I’m consuming them myself to know they’re safe?! Worst that’ll happen is you’ll eat some kale-like nutrition. Best case, we’re high as ballz together for dinner at mama’s.

Look, if it was outside people idgaf, but come on bro. Don’t let me play mad scientist by myself. Who’s gone eat this half a Graham cracker with herby Nutella on it?! Guess ima have to deck the halls all on my lonesome and so ima talk shid the whole time.

Fine. He can split that stanky ole joint of loud after our BIL comes out the bathroom with his wife. Does it taste salty, bro? I bet it tastes saltier than ima be all stoned out by myself.

I wouldn’t bet money my brother would trust me either

I would not take it personally; a lot of people are particular about what they put in their bodies. Can you tell him with some level of accuracy what the THC level is in your edibles. To each their own.

As a long time shenaniganizer, I don’t fault him

My older brother is a tightaxx, wouldn’t even offer to him. My younger brother, like Dante from Grandma’s Boy… “Fxxx it, I’ll go to the looney bin with you.”

I would take homegrown over any dispensary stuff. I have seen and know too much about our State’s industry and regulations that just make me cringe. That’s why I started growing for the family.

Ok, send me your gummies and I’ll eat them

Yeah, on the rare occasions I have been able to give some away, pretty much the reaction has been - omg, weed that grew inside your house and you know exactly what happened to it from day one? YES PLEASE!

I make capsules for my husband because he has insomnia. This is the only thing that’s ever worked for him. He has no interest in smoking/vaping with me, just give him his sleeping capsules and he’s happy. I made gummies first and he hated them, and I agreed the texture was kind of gross.

For real I’ll take his

I make capsules for my husband because he has insomnia.

Could you post your method?
I make edibles for the wife for the same reason, but I dont like that she eats all the sugar every day from her cookies. I would love something more healthy.

Sure! I use a coffee grinder to grind the weed into nearly a powder. Pop that in my decarb machine and let 'er cook. I have a capsule maker, so I load up 24 tops and bottoms. I put the powdered decarbed weed on top of the capsule maker, and brush it in with a plastic card. Tamp down, repeat - until the capsules are filled. Then pop on the top, press down, and you have 24 capsules.

It’s a bit tedious, but it’s much “cleaner” than dealing with oil. I decarbed an oz last time, and made 120 #0 capsules. Husband takes two (!) at night.

I will take them sometimes for the more usual reasons. 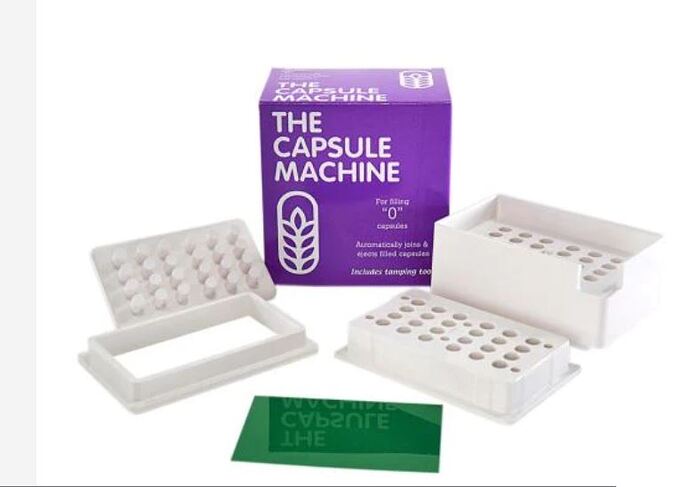 Thanks. Gonna try that asap

Good luck with that! Husband is super happy with the results.

Before trying cannabis my wife was sleepless for several days at times and was beginning to scare the crap out of me. Was becoming a bit psychotic. Sleep deprivation will seriously mess you up.

Ty Mrs Fiz. I’ve never even considered pill form. That’s so clean and smart. I love it! Ever tried melting store gummies, like Harabo, and just blending the goo with ur infusion? I know it ain’t natural, but it seems like adding tincture might make em better than fresh out the bag. I’m not too shy to work smarter, not harder.

Hey, since we’re talking bout “only from a store,” do y’all know why dispensary weed is always so airy and fluffy? I hate breaking it up cause it’s like a hard foam, like them orange circus peanut candies. It makes me think, “I’d like to thank today’s sponsor, Philip Morris, for commercializing TF outa this good bud.” My tail is sitting here like, “I used to buy wet weed, now my bud comes from Lay’s.” Shid is full of air!

No, I never tried melting store gummies. Sounds like it would be an incredible mess! My daughter actually did an “experiment” with my granddaughter with gummies - melting them in water on a plate. It looked kinda horrifying honestly and I think my daughter is ready to be done with the science kits I send each month…

I have never bought dispensary weed. I got tired of waiting for them to get up and running and decided to grow my own. I only know one person who has had some, and he likes mine better. I’ve heard a not of bad things about it so I can’t see paying the insane prices.

I spitballed some numbers for the heck of it one day, and even putting in all my durable equipment costs as well as the stuff you have to repenish, my homegrown is around $85/oz. Sure to go down next year, as I won’t be buying anything except water, electricity, and nutes.

What a cool idea! Right now my husband makes edibles to deal with arthritis and insomnia He’s still experimenting with how much is enough. I’ve learned not to sample his weed cakes!

A capsule seems easier to control, and they probably stay good much longer than an edible

I had started with gummies, but my husband hated the taste and texture. I told him to swallow them and bing! And idea was born.

I can pretty much get the same amount in to each capsule and they are much easier for the both of us. Capsules are a bit fiddly to make, but they are no where near as involved as edibles.

I suspect if I ever have a gathering with people who partake (which is not very likely!) I’d still make some edibles for the folks.

Unfortunately, I don’t have too many friends who indulge.