When to hold when to fold

So I wrote an earlier post about spraying for bud rot on my Blue Dream. In the end I decided not to do to various opinions. So today I went over her limb for limb, stem to stem really well and removed any buds and adjacent buds, with any sign of rot, and sometimes the whole stem if bad. So I’m confident I now have a ‘relatively’ bud rot free plant. I say that knowing there is growing spores not yet visible and likely missed a small spot or two.

Tomorrow marks the beginning of the eight week for her, I was hoping to stretch her out to nine, in two more weeks. There is no real rain in forecast for now, which helps, but being east coast there is always morning dew and humidity. So my question for those with experience, is when do I cut my loses and harvest what remains? I probably have half of what I had two weeks ago. Do you think I can at least manage the bud rot for another week and still get a harvest? It appears to be mainly on my side limbs and the bottom of the few colas it has touched. My tops seem ok, I have only removed one or two. Trichomes might just be starting to cloud. Thanks for any suggestions.

An extension cord and a fan, keep steady wind on it for a week? If its within reach and not worried about somebody seeing it

Probably a bit too far, but thanks for the suggestion. I am on a steep hillside, so at least at sun up I usually have a 4-6 mph breeze. The bad news is that I have lost half my plant, but the good news is that if I can harvest 70% of what remains, it will be more than enough. I just did feed her yesterday. Im going to do just straight water for now knowing harvest is going to probably be sooner than I wanted. I’m just wondering if I stand a chance of making another week or two for those who have gone through this before?

maybe one of those black soil covers some farmers use around their plants. or a homemade version. maybe it would be warm in the sun, speeding evaporation. Spread and tie limbs apart far as you dare for best air. I too lost half a plant, a big Northern Lights. I also cut off some buds and let it flower longer, then upon harvest had to discard a bunch more.

If you are in ground and not in pots, dont water more than 2 times a week in the fall. Plants in ground have far better access to water than potted plants. As for bud rot, often the cause is not boytritis but insect damage and or the fecal matter they leave behind. Normally when I see bud rot, and I get it every grow on my outdoor and greenhouse plants, I carefully remove the rotting bud and then take it apart. Often I find a caterpillar or evidence of one. Sometimes the evidence is poop below the bud on a sun leaf. Generally boytritis is airborn and takes humid cooler conditions to set it off. Its often grey/blue looking rot. In contrast I find insect damage more of a brown color that begins because a section of the bud has been killed by a bug and has begun to decay.
In the event of boytritis you want to very carefully remove and destroy the contaminated buds, also any dead or dying material should be removed from the plant. Keep the plant as dry as possible and well ventilated. May mean covering with a tarp?
As for insect rot, you are in luck… you can simply remove and discard the crappy bud. And you are off to the races. You may wish to spray with a dilute hydrogen peroxide? But I never do.

Thanks for the information. I haven’t completely taken apart to look for caterpillars. I was spraying twice a week up until about 3 weeks ago with neem and soap. Most damage is brown. Plants are in 60G grow bags. Had to build a make shift deck of sorts because of the slope of the ground where they are growing. So blue dream is probably almost 2’ off ground on wooden slats. Besides the BD, I also have 2 LSD strains and a GG4. I have only found two bad buds between those 3 plants. I feel really good about how I cleared out the bud rot on the BD. For now I’ll just keep a good look out and go day by day. Due to the amount I have removed, it made it easier to tie the remaining buds so they are more vertical than horizontal as some had been. To do it before would have made it to crowded. I do have covers for them in rain, each one has their own umbrella. That doesn’t help the 90% humidity that develops each night and early morning though. 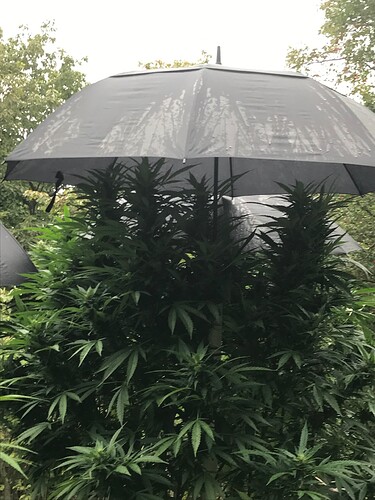 May I suggest that if the climate is typical, try to find strains that are very resistant to mold and mildew. It takes a while to do because there are so many choices now. Once you find one, keep that in your stable. One such resilient plant is purple bud, ( the purps ) if you can find it. Very pretty too.

I did look up a top ten list of mold resistant plants, and I know the BD and LSD strains were on it… can’t recall the GG4. But have since read about better strains for resistance, so thanks for the suggestion on the purple. Im allowed 4 plants. So next year my plan is to probably grow two resistant photo strains outside, and I’ll grow two autos in bags small enough to bring in from the weather when needed. Also going to try some indoor grows, I think Santa might bring me a grow tent.

the “4 plants” limit … made me think a fellow Canadian too.
Quite the variance in US, one state allows 12, one allows 3 flowering. Oregon and I think AZ allow 4 I think, based on member’s comments

I’m doing a zone 5 grow in New England. I already took my GG4 and two Gold Leaf do to the heavy rain we received last week. I left my BD in the ground but pruned all the large sun leaves off to create more airflow. I am a rookie and wish I had left the others in longer but I didn’t want to lose too much. I have possible rain this week with humidity I’m just going to let her ride. 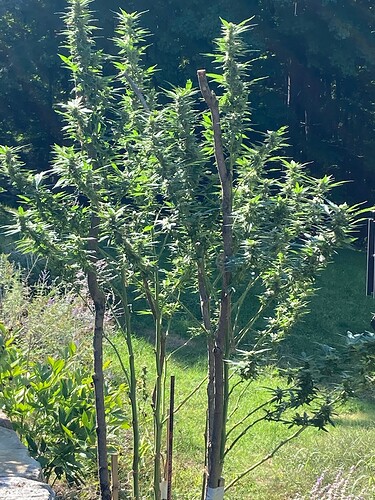 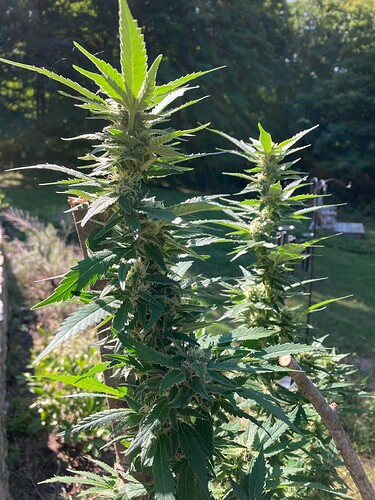 No. I’m in VA, northern mountain part. That’s why I got rain and humidity issues that others on the east coast contend with.

must be nice terrain though

Good luck. My GG4 appears to be at least 2-3 weeks behind the others in bud maturity. My LSDs and BD quit stretching and started growing the buds, while the GG4 stretched for another 2-3 weeks. The other two strains are losing their bottom fan leaves, but the GG4 doesn’t show any sign of yellowing yet.

they look like they should pass air though them reall good. way to go on finishing the GG one of the best strains.
its like tryin to grow weed in a carwash over there eh haha

Yeah man September doesn’t seem like the best month to allow bud to mature in my area. That’s funny though “growing weed in a car wash” I work outdoors and there comes a time in the season where enough is enough of the humidity.