My issue is she’s a monster, and my other plants are not as tall but are more bushy, she’s the only sativa.
Can I tie her down to a bamboo cage after 3 weeks almost of 12/12? Is it advisable? What would you do with her? Considering she will and already is being a greedy SB with the light.

IMHO, I think at 3 weeks, she still should be flexible enough, unless the stalks and branches have become too rigid and will snap… I’d say it should be ok @McLovin777…but see what the others say brother!

You have me singing Queen song… Tie your mother down… Woohoo! @McLovin777 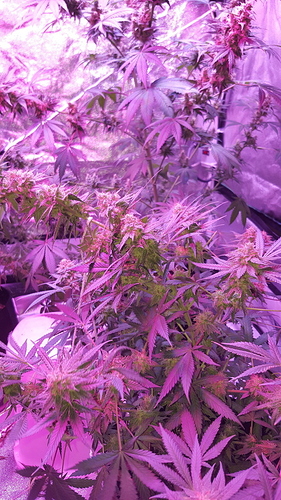 you will find something to put under them

I agree. You can try flexing her a little to see if there’s a chance she’ll bend. I think they have a tendency to bend better when thirsty too. If not, look at some buckets or whatever to raise the rest of them.

I’ve supercropped branches on a plant that was 2 1/2 weeks into flowering and it did great. I had topped it during Veg then decided it was going to be too tall after the stretch so I supercropped the 2 main chutes to even out the canopy after a week she had a couple thick knuckles and was putting in some weight. Just a thought.
It is better to do it earlier so proceed at your own risk

I’ve got a plan… waiting on equipment but if it goes as well as I think it will, should be a pretty impressive DIY cage/support system