What are the best ways to use lighting, or different ways to flower rather than using 12/12

I have heard some people do 10 on 2 off . I have heard people use 6 on 18 off I have heard several other grow lighting patterns. What is the best for Potency, yield, etc… I don’t care about the electric bill really I simply want to grow the best quality and quantity. Thank you for any help in this area

Hey Disney, unless you are and experienced grower I would wait on doing all those light changes. It is true that some believe that their are benefits to change cycles. The answer most would tell you is 18on6 off for veg. and for flower is 12/12 light cycle. I am sure one of the master growers will be along to explain the benefits of light cycle changes. Hope this helps, Mike

Yes it does Mike thank you I have left it at the 12/12 but I have read so many threads that swear it increased their yields by up to half that’s a big increase.

The standard – 18 hours of light/6 hours of dark per 24 hour day for veg – and 12 hours light/12 hours dark for flowering – this generally is what is used indoors to emulate what the plants would need to occur outdoors to get the plants to produce flowers/buds.

Cannabis is what is commonly known as a short day plant. This means it flowers when the days get shorter, in the fall/winter.

This would not work for flowering.

In general, most strains need about at least a solid 10 hours of darkness to flower. So 2 hours won’t cut it.

Some strains might flower with as little as 8 hours of darkness, but these would be rare indica or ruderalis dominant strains.

And pretty much all strains will flower with at least 12 hours darkness. This is why 12/12 is used for flowering indoors.

However there are a few equatorial sativa dominant strains out there that have been known to need a full 13 hours of darkness to really get flowering.

This would get your plant flowering, however most studies have shown that any less than 9 hours of pretty intense light, and the plant wont be able to produce as much THC or “bud mass” and will result in a lower yield with less potent buds. And lower quantity and lower quality is not what most people are looking for…

I have heard several other grow lighting patterns.

Yes, there are some really bizarre ones out there, but any that use much less than 10 hours of light and much less than 12 hours of darkness just wont get you the results that you are looking for.

Thank you so very much I had a guy because I had to move tell me to go to the 10 on 2 off cycle. He said the yield wouldn’t be that great. I stuck with tradition and turned the job I was moving for down. I also am using low stress training rather than topping or scrog. I cut a bunch of my shade leaves or sugar leaves off to let light through to smaller braniches. I heard afterward that the plant needs those leaves for essential sugars. my plant seems to be doing fine it just started flowering will I get any kind of descent yield with only 2 sugar leafs?

I have a friend in Vancouver that experimented and published a book on the 3/1 photo period. You run lamps 3 hrs ON and 1 hour OFF - 24 hours a day in veg.

IN flower you run 2 hrs ON, and 2 hrs OFF _ 24 hours a day. It actually works but, I have not had the extra space to try it yet. Known about this method for approx.3-4 years.

What’s he book, id love to read it!

IN flower you run 2 hrs ON, and 2 hrs OFF _ 24 hours a day. It actually works but, I have not had the extra space to try it yet. Known about this method for approx.3-4 years.

This would not work for flowering.

much less than 12 hours of darkness just won’t get you the results that you are looking for.

Flowering in response to day vs night hours is called photoperiodism and it is the most significant influence on flowering.

Short day is actually a misnomer, as I thought I made clear above, it is the length of the night that has the effect on the plant’s biology. These plants should actually be called “long night” plants.

I somewhat inaccurately called them hormones, I used the term loosely more so as it is something a lot of people can understand on kind of how the biology works.

More accurately they are called phytochromes. Plants make 5 of them: PhyA, PhyB, and also C, D, and E.

The mechanism of photoperiodism in short-day plants is known as the ‘hourglass model’.

In the dark, Pfr spontaneously and gradually converts back to Pr.

So the plant pretty much needs the full uninterrupted dark cycle (8-13 hours depending on strain) to convert all the Pfr back to Pr. and to carry out the supplementary reactions leading to the release of the flowering signal (“florigen”).

This is why “The Gas Lantern Routine” works and prevents the plant from going into flower. Only a flash of intense 660-nm light and the Pr is immediately converted to Pfr, undoing all the night’s work.

There are ways to use far-red to boost or speed up flowering, but I’ve already gone into more detail than I’d like, as some of this might be hard to understand or too much to read through, hence why I normally just keep it simple and say “hormones”, lol.

All I can tell you is: I know the guy, he owns a seed bank site in Canada. He proved the theory and got a book publishing deal. He would not have told me it worked, if it didn’t. So; I would advise you to hold off on dismissing the science until you have read the findings and scientific proof.

Scientific findings change all the time. I am going to try to find out name of book. Unfortunately; I am not going to join his site again in order to make this search easier. If anyone else wants to; Post here and I will PM you the website, and you can join and find out about the name of the book.

This is from the latest scientific understanding. And you really should know this working in the professional agriculture industry. This is well known, and if the 2 on 2 off worked it would be used in the agriculture industry for short day plants, especially if there were any advantage to it.

And; You talk as if all farmers know these things. Call 10 agricultural Institutions. I bet you will have a hard time finding anyone of them that know anything about hydroponics. My point being No one keeps up with anything or any science that does not directly relate to their field of expertise or their commercial produce endeavors. LOL It is true. Thanks for your thorough explanation. I will try and get to it later…

I did find his book, and it seems he is not addressing the exact idea I mentioned. I have not talked with him since but, I found his book on Amazon. Now he is preaching shorter photo periods. NO 18/6. Everything is less than 12/12, and he is basically emulating the natural light created by the Sun. 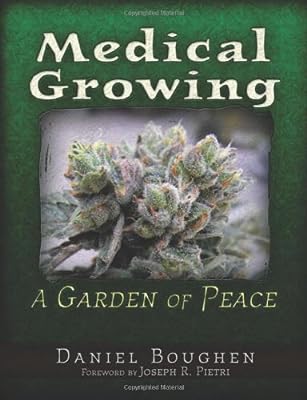 Employing proven flower-growing techniques used by commercial greenhouses the world over, the growing of cannabis plants is demystified in this helpful gardening book. The natural cycles and growth of ...

All I know is he explained that other theory to me years back.

Disclaimer: I do not agree or disagree with this book or the contents and theories contained in the text. I am merely sharing an interesting concept I heard about, since you asked!

And; On that note I am done debating with a book. Now, I need to prepare for the Clemson game. Peace

Dan Boughen discusses pfr in some youtube videos. Give him a break if you watch them. He is battling a severe Cancer. He seems very unsteady to the guy I knew. I built and ran his website for years, and in fact; He is an affiliate of ILGM. He has our banners on his site.

This book has nothing to do with the 2on/2off and is entirely irrelevant to this discussion and doesn’t even allude to, yet alone prove anything, lol!

And; You talk as if all farmers know these things. Call 10 agricultural Institutions. I bet you will have a hard time finding anyone of them that know anything about hydroponics. My point being No one keeps up with anything or any science that does not directly relate to their field of expertise or their commercial produce endeavors.

Except this is basic, almost high school plant biology, taught in pretty much every textbook post 1940.

But, you are right to an extent, and it is a sad commentary on the actual scientific literacy of most Americans and most people don’t remember these things from high school, if they actually paid attention and learned them in class in the first place.

Nonetheless I am sorry for your friends condition.

It amazes me that all these time changes don’t cause these poor plants to turn hermi? Good luck Mike

What I was saying is: This is the guy that told me about the 2on 2off method. He told me that his book would explain the whole thing. Turns out he wrote the book about a different…whatever.

None theless, the book is on topic for this discussion which was “alternative lights schedules”; Right?

He does describe an alternative way of thinking here.

Meanwhile, I do want to read up on pfr’s and that science. The fact that he mentions it and then you posted about the same thing. We never discussed these topics or anything similar in my High School Science classes, and I was in Texas in a Top 5 national school district, before I moved to the Swamp in '71

Will catch up with you after I find time to do some research. (although I really do not need to know this science in order to grow successfully. I already use shorter photo periods than most all growers due to my constant experimenting aided by from teachings I am solid on, and it works and provided me with enough knowledge to have a commercial op…Go figure.

Thanks again for the science expanation.

I’m growing with the 4/2 schedule in my veg tent, with 4 cycles of 4/2 during 24 hours. Just started yesterday, so I’ll be sure to record results!

That is a ballsy move my friend. I wish you success. Cannot wait to see what happens.

dude…I am so gonna laugh my substantial ass off if you speed up the plants growth schedule and end up with a 8" tall plant with lots of mini buds that look like popcorn kernels, lol.