What about the mycorrhizae and other less soluble stuff in Autopots?

I jumped on the autopot wagon in July. Got a 5X5 tent full of GSCE autos I decided to start off with. They’re doing amazingly well and I love the system. I decided to run with chemical nutes in order to avoid sediments settling in the lines and clogging things up, but it’s raised a question to me also. Is it ok to occasionally top feed the plants using autopots? I’d like to apply my less soluble feeds via top feeding to avoid the clogs I’ve heard about. My system seems to be running pretty clean at the moment and I’m hesitant to mix in mycorrhizae or any other similar feed/nutes because I think it’ll settle in the lines and start choking things off. If I could top feed a little every couple weeks or so, I feel that might be the better deal. I’m using Lotus and FoxFarm nutes now. Been holding off on the other stuff, but I’d like to know what everyone else is doing as far as the more sedimentary stuff. I do have a pump circulating it the reservoir, but it does nothing once the feed is in the lines where I think it will settle and eventually cause problems. AM I over thinking this? Ok to use mycorrhizae in the lines?

You could pour it directly into each tray. You risk flushing all those salts sitting in the top soil down to your roots if you top feed.

No reason you couldn’t top-dress mykos into the top soil layer: it will grow into the medium over time. But definitely don’t run any organics at all in the autopots.

Interesting idea, but wouldn’t that throw off the PH? I’ve got some outdoor plants also. No worries about what I’m giving them, but I get my mix done and set ph after it’s all together. Wouldn’t adding the mycos in the trays throw off the ph?

One other issue I’ve run into using the autopots is they seem to make my plants more sensitive to the lighting. This is about my 5th grow in a tent. I’m using a clone HLG v550 led setup rated at around 430 watts turned all the way up. Past grows, the plants never appeared to be as sensitive to me turning it up as they are in autopots. Is this normal? The tops are all yellowing some if I don’t keep an eye on the light height and watch the dimmer. I know it’s the light because I can rotate the plants and once green areas begin to yellow some. I’ve got the light as hight as I can go in my 8ft tent and it’s turned down to not much more than 50% also. GIving solid cal mag feedings, so I’m just kinda thinking I just have too much light. PLants seem to be thriving no matter what, but I’m sure they’d be much happier. I also had them on 24/7. Switched to 18/6 two days ago. They seem to be doing a little better, but it’s too soon to tell. Forgot to mention when I first started the thread.

Just top dressing with nothing to wash it down? Seems like that might take a while. Yeah… Skipping organics altogether aside for thinking about the mycos. So far, I’m avoiding much of the grunge or slime buildup in the reservoir, which leads me to feel the lines are alright also. I like the mycos though. Would be nice to find some way to incorporate it in that won’t clog things up.

I use Jack’s in a couple of autopots filled with coco and perlite.
This grow I ran Tribus original, Advanced Nutrients Voodoo Juice and Piranha through the autopot reservoir. The reservoir did scuzz up so I drained and cleaned it and the lines. I posted the same basic question you are asking here. Many say they run Tribus through the autopot without issue. Other say they run a clean reservoir for fear of it fouling. To be safe I quit running Tribus through the reservoir.
A couple weeks later a line was fouled again so I drained it, pulled the filter and wave maker for cleaning. And to my surprise the filter and wave maker was coated with crud. Not sure why but this time I used peroxide and bleach to clean everything thoroughly. Apparently I did not do a good job cleaning it before.
Why did it scuzz up again or even the first time if others use Tribus successfully. In an attempt to see what happens on 7/18 I mixed Tribus in Jack’s with some AN Bud Candy for it to eat. I did a second jar without bud candy. One month later the two jars look exactly the same with both jars being relatively clear. None of the brown scuzz I found in the reservoir before.
In the meanwhile I add Tribus to the tray and I also top feed it. I turn off the valve and let the tray dry out before adding the Tribus & Jacks mix. I top feed about a liter once a week.
I think if you top feed regularly it does not pose an issue.

That is my experience.

I run tribus through the rez with virtually no issues. Also as mvp mentioned you can skip the rez and add right to the tray. When I add to the tray I usually shut the valve to that tray off and way over fill it. When you add tribus to a nute mix do it after mixing and ph’ing. My next run I think I’m gonna try recharge for the 1st time and my thought is to add it directly to the trays to avoid clogging issues

I start adding microbes (generally inclusive of all) when the sprouted seed goes into the seedling mix. I add Great White then and again with all transplanting. When I water or use Jack’s I add microbes as well. That way they are there doing their job when called upon later. If they are going into a spring pot (autopot fabric pot), I won’t transfer them for around a month. They get fed microbes during this time. Then when they are transplanted, I top feed for two weeks before switching to the reservoir. Again, they are fed microbes during this time.

Interesting… Never heard of Tribus before, but that’s not unusual. lol. Most of the mycos I’ve dealt with were powder form. So… PH won’t change if I was to pull the pot, mix in some mycos powder in the tray, then drop the pot back in? That seems to be the solution I like best. Guess I need to look into the Tribus also.

I wouldn’t and havnt pulled a pot out of the tray yet, sounds like a mess waiting to happen. I can’t speak so much to what others do but like I mentioned before, you can over fill the crap out of the tray if you want to. I’ll use this method if 1 or 2 plants need different attention than the rest

Another similar product I have used is FishSh’t. As they say “It is good sh’t” 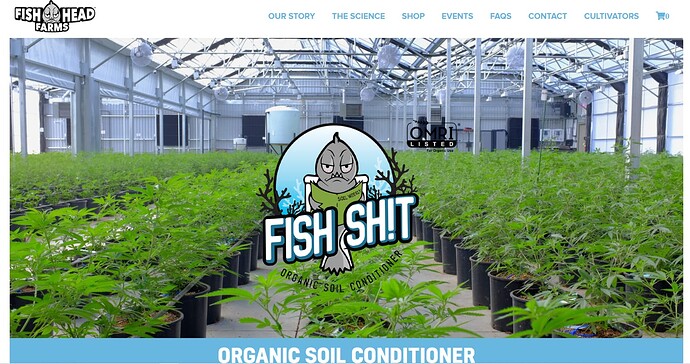 Cool! The more I think about it, the better I feel doing it. lol. No reason to pull the pot, I guess. Can add where the valve is and be done with it. Thank you!

I do use Fish Shit. It’s such a small amount and the particulates do seem to me to be passable. I haven’t had any clogging issues yet. I fired the system up July 13th. The reservoir has always looked clear. I did clean it once just to see what came out and the residue was pretty minimal. Looking at your pic, it looks like you don’t use much Tribus at all. Similar to Fish Shit. I use the powder (Great White) mycos stuff for my outdoor plants. That’s the stuff I was most concerned about using in the system. I could probably mix up a small amount in some water and pour it into the tray at the valve. The Tibus looks intriguing. Gonna look into that too. Thanks

It’s good that you know FishSh’t. Tribus is comparable. Some here swear by it and others swear by FS. I have only recently started using them. After FS I gave Tribus a try. I’m not sure I can distinguish results between the two.
Advanced Nutrients Voodoo Juice and Piranha are also excellent products for bacteria and fungi respectively.

Has anyone here mixed Mycorrhizae into their coco mix? And if so how much per 5gal pot? I’ve been thinking about this and if it would act like a slow release type of amendment as the pots soak up water/nutrients. I add some into the hole I plant the seedling into but was wondering if this method might work better over time?

mixed Mycorrhizae into their coco mix

Sure; a lot of people do. You can’t put too much in and better to add a lot early on to develop a beneficial colony to help the plants metabolize salts.

I’ve done coco with and without and frankly saw no difference.

I layer it in as I’m filling the pots. A couple scoops of coco, a sprinkle of mycos etc…

So my past 2 runs (10 plants) I used promix with extra coco and perlite added.
Promix has microbes and I didn’t add any other more along the way other then hydrogaurd.
I used silica, cal-mag, general hydroponics trio, and hydrogaurd.
Grows have produced very well but I have seen no difference in product then when grew in coco-coir and perlite using only cal-mag, GH trio, and H2O2 (hydrogen proxide).

Where I have seen the difference is with the microbes in the medium, they have algae and all sorts of growth on top of medium and down the sides of the bags, my res, lines, and trays are alot dirtier then they ever was when useing H2O2 in stead of microbes.
My res, lines, trays, and spring pots stayed clear when i ran a sterile system…

Ive got enough hydrogaurd and promix for another run and i will continue what I’m doing till its gone.

But I am of the mind set now that when i resupply, I will get coco/perlite and hydroton in bottom.
And back to just cal-mag, GH trio, and H2O2.
No silica or expensive ass hydrogaurd or any other microbes…
Sterile systems is where its at for economics and ease of use