This plant sprouted the 16th of October… And I keep reading about the benefits of topping., so I’d like to give it a try…this is a bag seed but I’m taking it serious, that when my WW autos get here I have an idea of what to do. 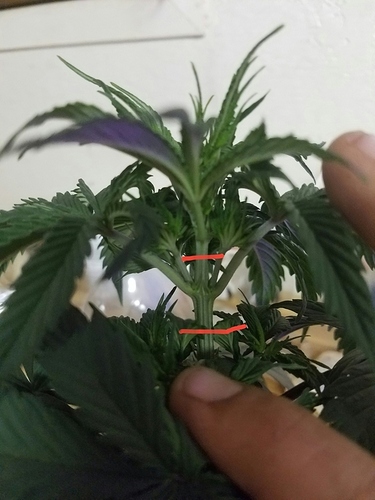 The top red line is your cut , to create two new tops .

So you, or Edward, should make the cut just under the highest pair of leaves? Is this more beneficial than pinching the top?
I’ve read that pinching can force up to four new stalks to sprout.

topping has more consistant and predictable results pinching and fimming can create more tops but are they uniform?

It makes a big difference. 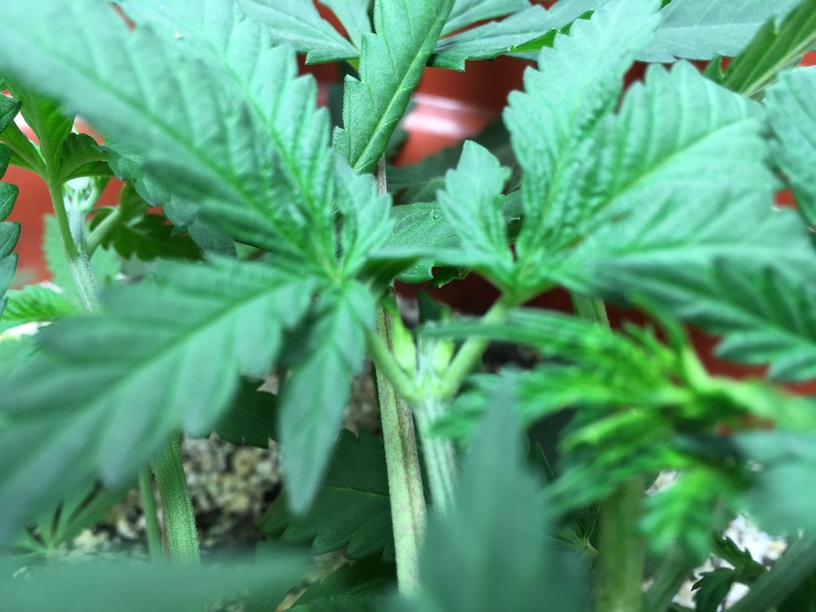 I topped this Monday this week and this was Tuesday

If you were to cut at the bottom line, you would have a better candidate for cloning. If you don’t plan to clone, go with the top line as they advised above. 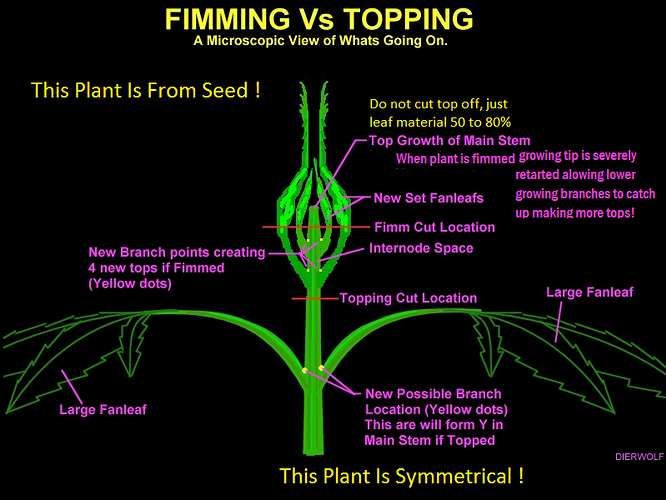 I hope this helps…

thanks for the replies guy… i wont be cloning this one, its a random bag seed. I dont have any equipment to clone even if i wanted to…But i definitely will top the plant… today make it 33 days old, and receiving 20 hours of light so no clue what sex the plant is

And when is a plant actually ready to be scalped (topped) ,according to height (as I’ve read in some places) or number of leaf pairs? Thanks for any advice.

You can top once you have the 5th node but then you can top everywhere from then on. Ive topped mine twice.

Ive also got the temps under control with the new intake fan and have been able to move the light much closer and heads are appearing in all sorts of places. 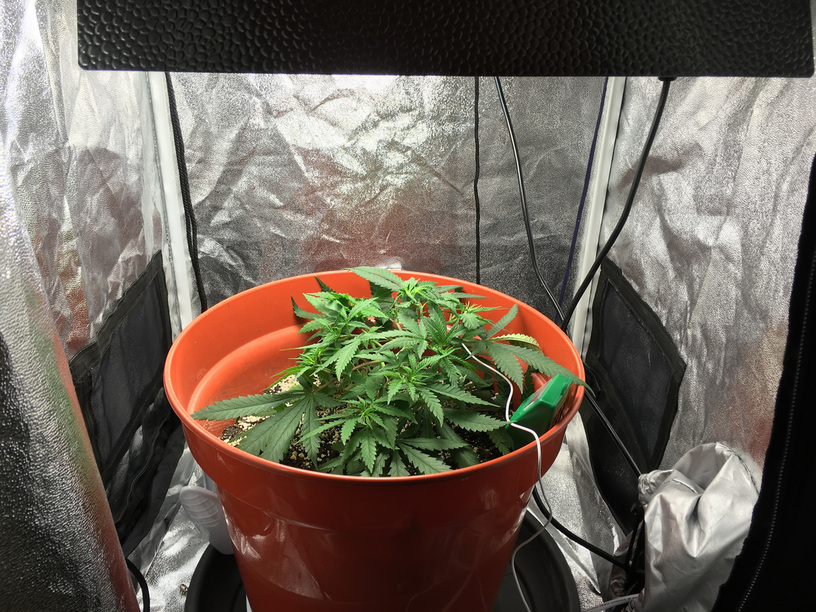 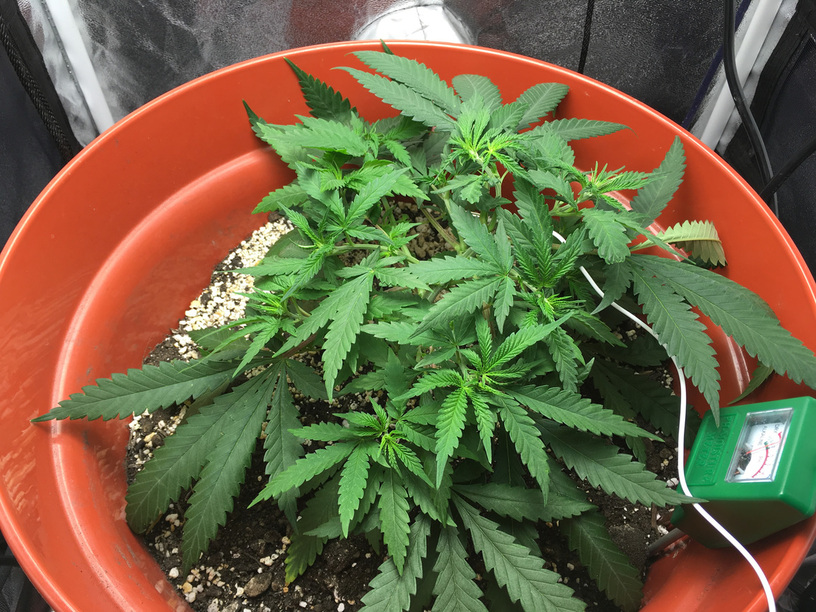 Cool! Do you have to wait until you have at least 5 nodes before topping again? How do you like your Ph meter, are you satisfied with it (I have the same, measures Ph, soil moisture and light intensity, but for 14 euros, it may be crap too). Thanks for your help, plant looks great!

No. Once its there you can top everywhere that you want to. I waited til i had 3 nodes just to see what would happen and that seems to have worked out). This was mine. 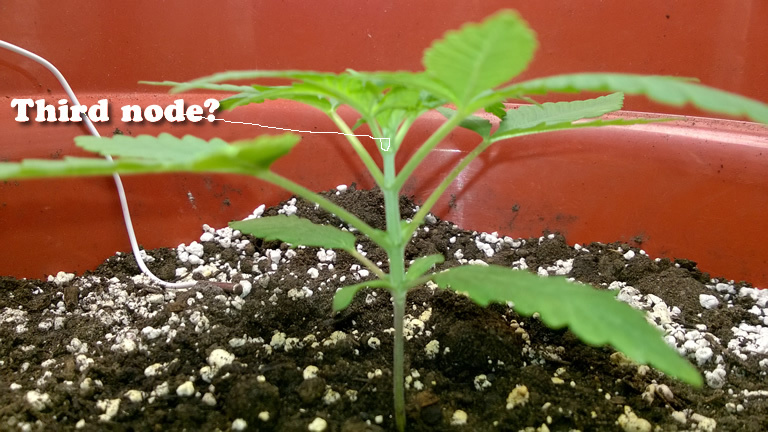 Im a newbie grower myself so its a learning experience for me but although I was a nit nervous, its all worked out fine. I topped this and then left it for a few days before I topped another branch so it didnt stress the plant too much.

My meter only does Ph and moisture but for me its only a guide, Your plant is the real way. The meter says my ph is 6.8 at the top and 6.6 at the bottom but the plant looks fine (and soil is quite forgiving by all accounts) but as long as the plant looks ok then no need to worry. I do check on mine 3 times a day. Once in the morning before I got to work. My dark time is between 1 and 7pm (just about when I get home) so I check it then and then again later in the evening. I can just sit there and stare at it though

Ive got about 13 bud sites at the moment but expect to have between 6 and 8 main colas with the rest being smaller ones but I have another 10 days or so of vedge and then im going to switch it. I am suprised at how compact it is and while I have done some light bending (which you can see if you open the pictures to full size) its all been just that. Nothing is tied down or anything.

I do my first topping around day 14.

Yeah, I know what you mean about staring at the plant…as if that’s going to make it grow faster.

@yoshi the only thing im really stuck on is how many times to top exactly. i got the topping location down, and im gonna be scrogging two, maybe three plants. more likely two, but how times should you top for best results?

I’ve done several ways, I top once, twice and all way up to eight times and the plant I topped eight times was my biggest yielder ever but it was vegged outside in sunlight trying to control it from growing to tall, but it’s merely up to the grower, it’s not actually must do procedure so decide and let it grow and once it’s finish

you will have a better understanding. Than your next grow you can repeat or do more topping to compare which way is best.

@yoshi i gotcha, so its merely dependable upon the grow itself, correct? how it’s spreading out, etc.

I believe every cultivator should try every technique out of curiosity and learning to get a better understanding on what works and what don’t work. This why I don’t advise are I learn to try not giving advice cause what I do is completely wrong to what the mentors and forum moderators say do, so die to difference of opinion and them being professionals and me a rookie beginner many of them don’t agree to what I have experienced and learned to know what works and what don’t, cause to me in other words how would you @GreenGanja0502 would know unless you try it right? So if you want to top it once, it’s your plant you can, if you want to top it 30 times you can, I’m not saying this in a smart sarcastic way Sir, I’m only trying to get you to look at it from an optimistic view on what you will decide, than write down everything you do in the grow, so in your next grow you can make adjustments , try different techniques and compare the last grow notes to the next grow notes, that way @GreenGanja0502 would know exactly what happen, it would be written down and you’ll have that information to revert back to for many grows to come, than you can learn on how to maximize the full potential out of each plant you grow. Now besides if you only do what your told, than that’s the only thing you’ll know right, but let’s say I tell you do this but you try that and what you try gave you much better results that what I stated, than if you would have not tried your thoughts…right now you see where I’m coming from, so instead of asking it’s more less like you explaining what you’re doing and we are waiting for the results. I hope this make sense and not be taken in the wrong perception cause growing has many, many different variables and yes agriculture and science is the basic to what should be done, but how did topping get developed, how did scrogging get developed, how did many techniques get developed, by surprise some was actually created by mere accidents and mistakes but yet end in being great assets to cultivating a plant outside the box

, so just give what you think a try and keep the grow within the means of science

and see what happens for you, than inform us what the results was after you finish, now if you make a mistake don’t panic cause than you can revert back to science to correct the plant and they are so forgiving in some cases but not so forgiving in others Sir. I don’t know it all, I just know what I’ve done and tried that really works, like for example I used 1\4 cup of skin milk to a gallon of pH water once every two weeks to kill the fungus knats larvae that is in organic soil, which the skin milk cause the larvae to explode and die before hatching in overly wet organic soil in high humid conditions, some will say it’s not true, some will say it don’t work, and some will say it’s not science but I tried it and it actually worked when I had a fungus knat out break early in one of my grows cause my temperatures was low and my soil was staying to wet as I was over watering the plant, but it worked for me but I had to try it after reading

that from something a guy wrote that been growing for quite some time. That’s just an example on what I’m trying to state here if that makes sense, but I can only advise you which I really don’t like doing much here any more cause many say I’m wrong due to science, so I just try an experiment different things cause I don’t really grow for profit, I actually got started as a last option for my sister fighting colon cancer and it keeps my occupied at home, something to do after work, and it’s addicting and very knowledgeable to really learn on how much you can get a plant to produce, so journey out there and top it three times and see what happens but the more topping the longer the vegetative stage will be…Blessings I hope my crazy way of explaining make sense and not disturb anyone are cause conflict.