This is weird, has anybody seen this before?

What is going on? Never seen this. Has anyone? 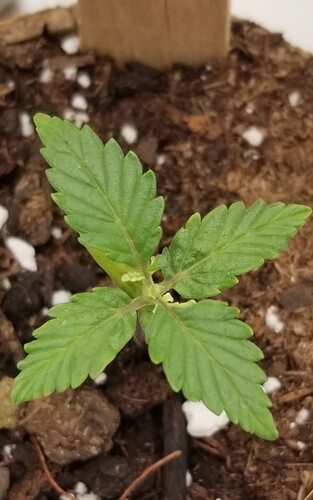 its really hard to tell from the pic exactly what you’re worried about.

No grow shoot, the new growth is almost white.

Give it a couple days to see if the other leaves shoot out. Maybe raise the humidity up to about 80% till it gets to veg

I try. I have reservoirs of water all over the tent to get the humidity up. Its gotten up to 84% at times. None of the others show signs of stress

I thought they were stretching a little. I cooked the last batch of seedlings with the light at 20%. I thought 10% was too weak. I have it at 10% this time and I have been reluctant to move the light much closer than HLG recommends. They recommend 33". I have it at 26" now. You think I could drop it a little without cooking them?

I have the Photone app.
I run seedlings at 300 ppfd
I’ll try to find an old thread on this

This is from Hellraiser. If you search his threads you will find a wealth of knowledge
Seedlings I like about 250-300, veg up to 450-500, and in flowering I like to start about 700 and work up to 1000 PPFD or a little more and then go back down a bit the last couple weeks.

But being a chronic over-lighter I sometimes push it in flowering when the plants aren’t too tall, like with the Cherry clones here. I have lights about 28" over the canopy so I decided to push it a bit (1200-1300 PPFD) in mid flowering.

I use photone too. Thats why I ran the lamp at 20% initially because ppfd was 333 at 20% and at 10% I get 180’s. I thought about lowering the lamp a little just like I said been afraid to againt HLG recommendation after the initial cook out. Lol

I run Hlg 320w
Maybe change the schedule to 18/6
Once they pop and get some legs they look for light.

I’ll tag a couple members for ya. Just so I don’t run you in the wrong direction
@Caligurl @kellydans @Nicky @MidwestGuy

This is weird, has anybody seen this before?

They will be along shortly I’m sure. And I hope they don’t mind

Thanks for the tag @Woodrow She looks a little weird. I also had one last grow That didn’t look normal. I finished it up an ended up being my 2nd best plant.

I actually wouldn’t worry yet. It’s way too early. Either she’ll pull out of it or not but you can overdo anything at this stage because they are so sensitive.

I dropped the light 5" and am getting around 220 ppfd now. Not much difference. But maybe enough to keep them from stretching without cooking them.

I have reservoirs of water all over the tent to get the humidity up.

Try putting strips of shop towel (blue paper towles) in the water and hanging over the edge some. Put it inline with one of your fans and it will add considerable more RH to your tent. I use this kinda setup during dry time.

To be honest my eyes are having a hard time focusing on that, wow I sound old I’m not even middle age yet!

I would agree with its to young to worry but if you are really worried drop another seed now.
Lighting looks good DLI wise 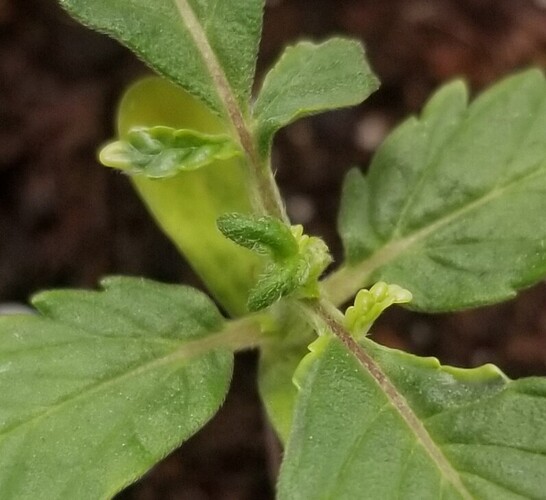 It’s an alien plant LOL. I’ve had some pretty strange stuff starting out but they turned around. When I get home, I’ll try and remember to send you some weirdo seedling pics LOL