Suddenly I have baby buds starting on the bottom but I’m 6 weeks into bloom. Do I cut them off?

I need advice on weather I should trim off a suddenly new appearance of little buds at the bottom of my plants. They are appearing everywhere that I cut off lower stems. I have just entered day 2 of week 6 of blooming at least two weeks or more to go. Will they take away from the larger buds which I don’t want to happen. I don’t want to shock them either. 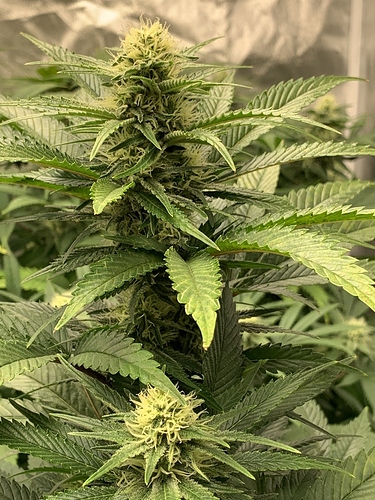 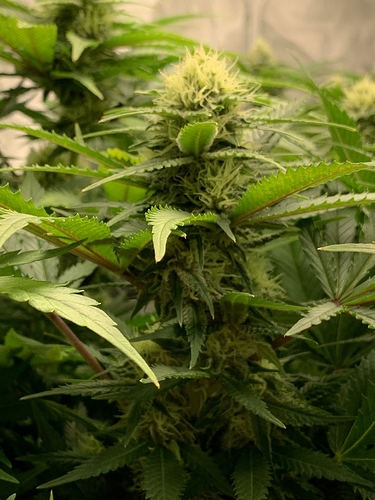 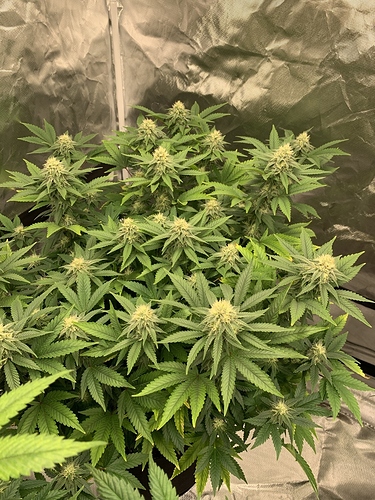 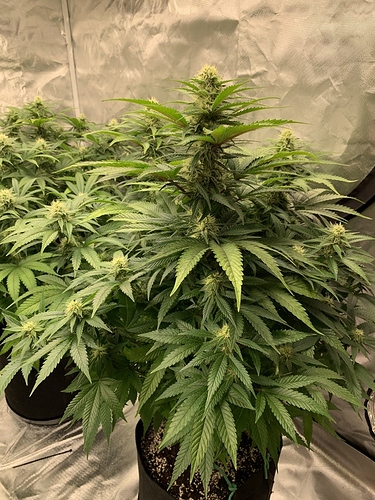 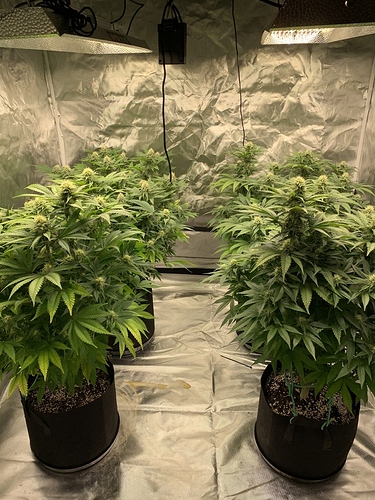 Should I do it all at once or a little at a time I can’t see them amounting to much but will add a picture tonight. They just appeared last week I’m more concerned about causing shock. What are your thoughts on defoliation my plants are really bushy should I trim some fan leaves back to let in more light? Buy the time I read about it I was past the window. At least that’s what I read I have no experience with this topic

Probably some more experienced people can be more specific about stress on flowering plants. I do remove larger fan leaves that are blocking lower bud sites. I’ve been fairly aggressive in removing lower larfy buds. I’m going to tag @imSICKkid I believe he can give you good advice on leaf removal.

Thank you so much. I’m so close now I don’t want to mess it up now.

I would remove all the lower larf growth. I would also do a heavy defoliation and take away every leaf that has a stem protruding from the buds top to bottom.

I also belive in defoliating, If they are autos definitely go alot easier on it and from what I understand it’s better to leave the larf for autos (I have yet to test this but I read a couple things on AFN that people had tested it and they got slightly more bud weight with leaving them).
I don’t remove my lower buds on autos yet I just defoliate as light as I can while still doing a decent job.
Or spread it out over two periods of defoliating a week or two apart.

If they are photos they are tougher and you can go ahead do a heavy defoliating and then just leave em to bounce back.

Personally I like the popcorn buds because I still cure it and toss it all in a jar, grind it up and heck it goes fine in my vape. Or add it to your trim to make more potent oil/butter/shatter.

Or add it to your trim to make more potent oil/butter/shatter.

Made butter last night. Used dried larfy buds and it definitely made it more powerful than just using sugar leaves.

Bottom flowers rarely bulk up in my experience. But I do keep a few for a taste test once it has plenty of trichomes on it. I don’t cate if they have amber. It gives a good idea how you plant is advancing.

Thanks I believe I will take all your advice @Bulldognuts @imSICKkid I will do one and post a picture you guys can let me know if I’ve got the right idea. They are Photos by the way I finally found the package from my seeds it disappeared during my renovations. They were from Native Seed Co. I got them as a gift I’ve never heard of them. I want to order some gorilla glue and some kush feminized seeds from ILGM soon. Do they deliver to

Do they deliver to

I don’t believe they do. @Nicky is in Canada and I believe he’s said that they don’t.

Imo would have been better removed a few weeks ago. If you plan to process trim into budder or something I would probably just leave them. If not, you can drop them.

where is there a reliable seed provider in Canada? Ontario? 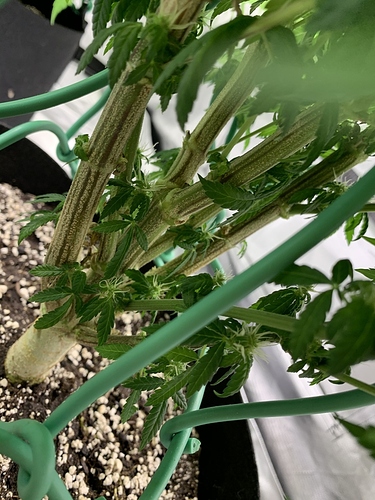 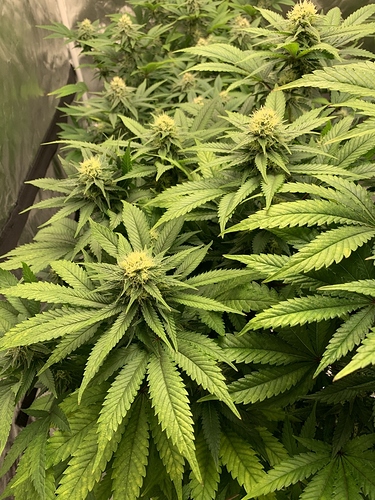 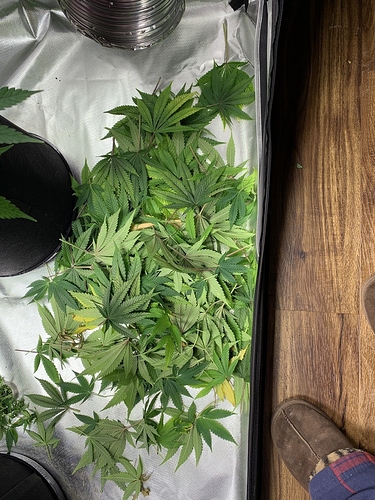 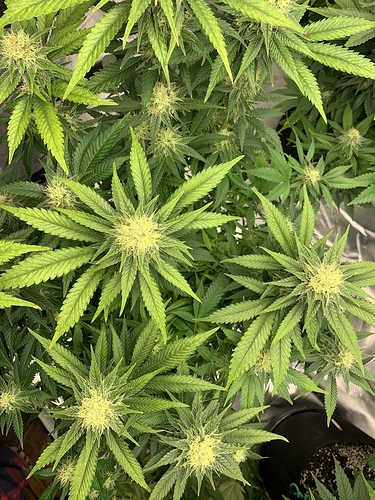 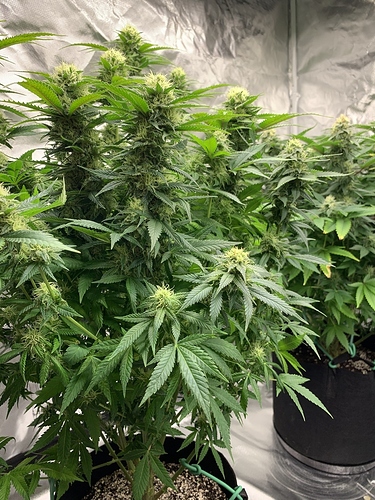 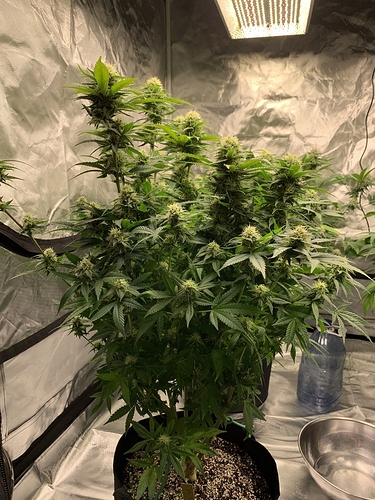 Yep, I trim all that crap off. They’re just sucking energy from the beauties above.

Looks good. The larf at the bottom can go also.

I’m with most of the others that cut them off. They draw energy from the more prominent flowers, they don’t get much light, and they ripen later than those near the canopy.

They keep popping up and I keep cutting them off. Here’s one of my girls that is 3 weeks into flowering. Her haircut is “high and tight.” I’ll keep her trimmed all the way to harvest. 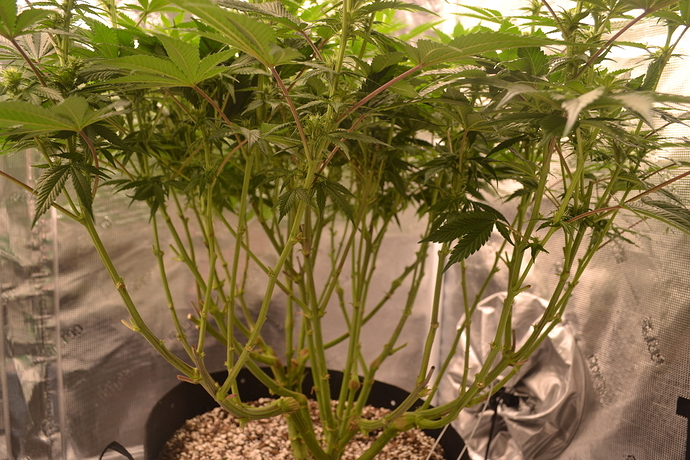