I had continued in an old topic, but rebooted here as I just thought of something new. I have a Gold leaf at day 30 of flower in soil. It was looking great. Then I had an exterminator come dust my basement with boric acid. I turned off my fan after he left, but I noticed the tent had already took in some dust and dusted my plant. I ended up rinsing off the dust with a hose, it was a fair layer. That was about 4-5 days ago. It seemed ok at first, but now the plant has since declined, with leaves turning yellow and dropping. Mostly the big fan leaves are yellowing, buds look relatively green but they might be slightly yellowing . I’ll keep an eye on them. I thought I might have a deficiency in phosphorus as it looks similiar, but then I started to think about the dusting could be the problem. It seems there can be boron excesses which looks similar in yellowing and dying leaves. Please advise! I just fed her dynagrow nutes, I’ve only been using 1/2 strength, feeding every watering. I’ve read to maybe alternate, but with the lower dose I dont know. Soil is organic roots potting soil btw. 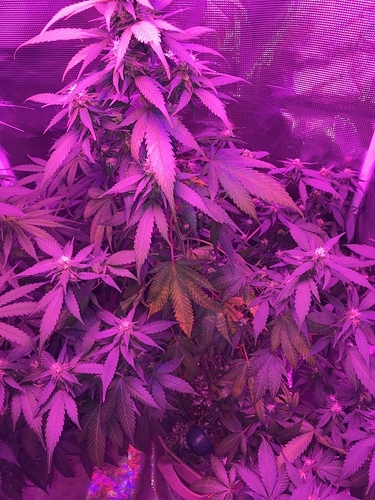 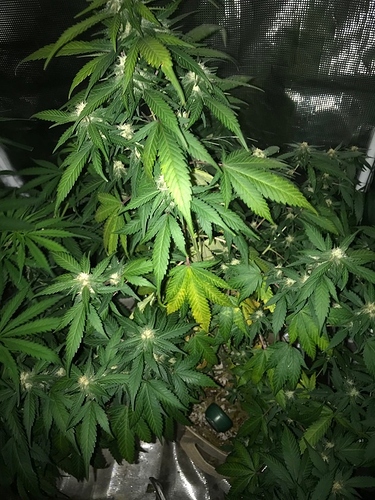 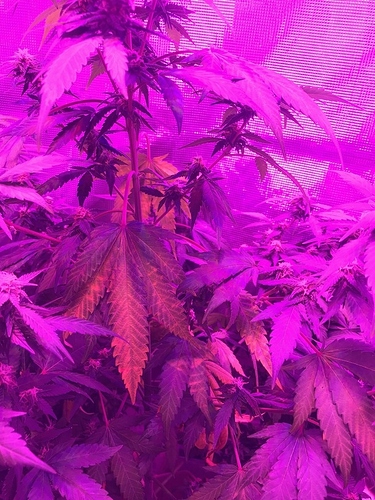 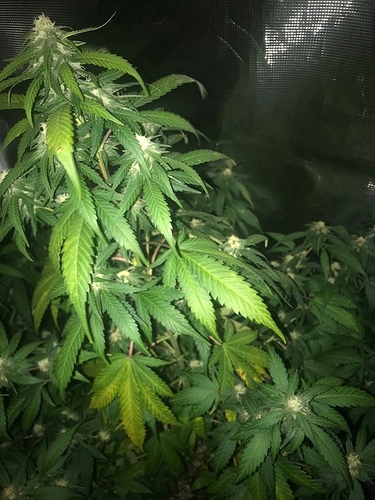 In soil even at 1/2 strength I still rotate feed and water.
In coco its feed feed water. She needs water. And that might be the problem but I’m not totally sure.
Could you fill out a support ticket. It would help a bit more.

After I posted the pics popped up, but it looks like nitrogen deficiency, could be the start of a lock out. Probably from feeding to much. Flush with sledgehammer at 6.5 ph going in.

How long has it been with out water, just nutes?

@Wishingilivedina420state Ticket attached to original post. Its been about 30 days since flushed. I have a tds meter coming in today to test runoff. I did do a small water only feeding 2 days ago, but that was maybe only 1/2 gal. Fed her full feeding 1 gal nutes yesterday. Should I let her dry out or just flush asap?

I’d say let her dry out some. And after 30 days of just nutes I’d have to say you have a lock out. I use fox farm nutes and soil. For me I flush every 3-4 weeks like clockwork if I see problems or not. I don’t use your nutes so I don’t know much about them but assuming that they need to be flushed at some point. I’m gonna tag some pros in this to get other opinions and more help with your nute line… let’s see who’s online today…

I would get a ppm reading of her run off also what is your ph.

The ppm reading to be able to tell if she is eating her food or if its creating toxic build ups resulting in lock outs.

Also in my opinion it looks like potassium deficiency

Also need intake to know how much she drank.

@Majiktoker @Wishingilivedina420state I usually water 3/4 gallon more or less, I checked my nutes, they were about 1500 at what I was doing and switched to 2200 early last week which is too high from what I can tell, will reduce to about 700 after flushing. And work back up to 1200 or so until last two weeks, unless you’d advise otherwise?

FYI PH runoff 7, same as my RO water. Its a probe so who know how accurate it is.

IMO it seems like a nute lock out. Ph 7.0 is kinda high for soil. I keep mine at 6.5 maybe some of the problem. But I’m really interested in @Majiktoker opinion he understands ppm a lot better then me.

2200 is way to high yes, that tells you she is not eating her food, which then tells me potassium is probably more than likely your deficiency.

For a plant in flower her size aiming for 1200 would be spot on now mind you the reason she is likely doing this is because plants grown in soil use up all the silicon or silica available to them in the soil by the end of their cycle being in flower is when they will use potassium silicate or silicon the most. Silica or silicon is purely potassium and will help tons and likely turn her around for the better.

Ph of 7 isn’t to bad as 6.8 in soil is a sweet spot however what are you phing water to when you send it through the soil @Daytrayd

@Wishingilivedina420state @Majiktoker. Ppm runoff at 350 currently, ran about 9-10 gals through her, she looks worse honestly. Gave a little bit of food, 1/2 g at 225ppm so see if the flush is just starving her worse. Any thoughts? Crystals looked better after flush but yellowing is worse.

It will look worse before looking better. What was ph run off at?

Ph of 7 for runoff, but it’s a probe. Everything reads around 7, lol. Should I trim yellow leaves or hope they come back green with some food?

I’d leave them, if it’s just nitrogen deficiency they will return green but it takes a little while. Anything else it want get better and should be removed.

@Wishingilivedina420state @Majiktoker. Runoff is 6.8ph, 350 ppm. Currently feeding 250ppm veg nutes (1/2 tsp per gal) for extra nitrogen. I Checked ph of my nutes and it’s 5.6, which was a surprise, but again runoff is 6.8 so soil is ph’ing it. Any advice? More nutes? Different nutes? I’ll definitely try another line next time, probably organic. Entering week 5 of flower, they are about 1/2” thicker than my thumb on main cola, rest are thumb wide but only maybe 1-2” long.