Still a Newb, but second grow :)

I Put two seeds in seed starter mix inside jiffy pots today.
Seed one is Vision Seeds AK49 auto. It is Sativa hybrid 65% and Indica 35%. “The AK-49 Autoflower has a smooth smoke and a high THC level, The AK-49 name is based on her genetic build up, similar to the early AK-47 when this stain was still clearly Sativa dominant, this is a mellow and good looking plant with a solid genetic base awaiting a successful future in the hybrid cannabis world.” Sounds awesome, right? I wanted to work with a Sativa dominant plant this go around.

Seed two is somewhat mysterious-the only info I have is the maker and that it is a Ruderalis Indica Auto.

I am very excited about starting my second grow. I am not counting Potty mouth from my other journal, although she may live. Check my other journal later today for an update on her.

For comparison @Tr33 the AK47 from ilgm is a 50/50 hybrid that I love for afternoons and after dinner as it is a might relaxing. I think the AK49 sounds like a winner!

I think all autos are breed with ruderelis as that is where they get the autoflowering from? I didn’t double check that but that’s my recollection!

@bob31, yes they all have ruderalis if they are to autoflower. I don’t know how much ruderalis is needed though, so I will look into that. I am not sure why there is not a % listed for ruderalis…I can’t wait for the AK49 to start growing…I have high hopes

Best of luck. I’m definitely interested how the AK49 develops.

I think that autoflower gene is all breeders wanted from ruderalis. So it could be <1% as long as it got that gene. I don’t think pure ruderalis is very good for smoking. If it was, we would see seed vendors advertising it.

@1BigFella, I did not think of it like that. You make perfect sense, just the gene so less than 1% as you said. . No, pure ruderalis is not good for smoking. Thanks for chiming in on that!

Biologist by training and now avocado grower for fun. I envy cannabis breeders: They get to see how their crossbreeds work out in a few months. The reason we have so few avocado strains is that it takes at least 5 years to see if your crossbreed makes good fruit (or ANY fruit). Sometimes you end up with a big gigantic tree with silver-dollar size purple Guatamalan throw-back fruit! And you paid to water that tree for 5 years.

So with avocados, all nursery stock is cloned off one original great grandmother plant. Then we have to deal with root rot, so every clone is grafted on rot-resistant root stock.

I don’t want to do a hi jack here but my Dad used to grow avocados from seed and taught himself grafting. We had an old sour orange tree with about 5 different citrus

on it. Thanks for bringing back that memory

I agree with big fella… I am currently in start for a grow to cross pure rudaralis strain with its sister Species. The only thing desired for is the genetic trait. If the seed from a hybrid mother grows sativa and autoflowers. Boom!

I think you need LOTS of crosses and then see which one has autoflower AND high THC. You could get a bunch that get autoflower and low THC, or no autoflower and High THC, or of course the worst from either parent. So you need to make the cross and then grow dozens of plants, and test the resulting plants.

Then abuse one of those females enough to make it go hermaphrodite and pollenate itself. Keep on in-breeding until you get a strain that is consistent. It’s hard to make a new strain that breeds true and doesn’t have throw-back descendants. Far easier if you find a good phenotype and then clone it.

The AK 49 has broken ground! I will take her birthday pic tonight. Just for informations sake. I soaked both seeds overnight, and did not soak until a tail popped. After the overnight soaking, I put her about an inch and a half down in starter mix, and on the third day she rose.

Ok, I’m confused. Herming a plant is a practiced way of breeding? I was under the impression that seeds produced from herm were more likely to herm, is that not true?

I also don’t believe that a 1% gene would be considered stable either. Not to say as that it has to be 50/50. But you’re talking about crossing a rudarellis, and then back crossing several times after that with a pure indica. The more it’s crossed with the indica, the more indica like traits it will have. All things considered, making it less likely to produce an auto flowering phenotype each time.

Having a seed run for fun or to save a few bucks is one thing. But due to the cost of lighting these grows and what it takes to create a stable strain, it’s usually a lot cheaper to leave the breeding to professional breeders. 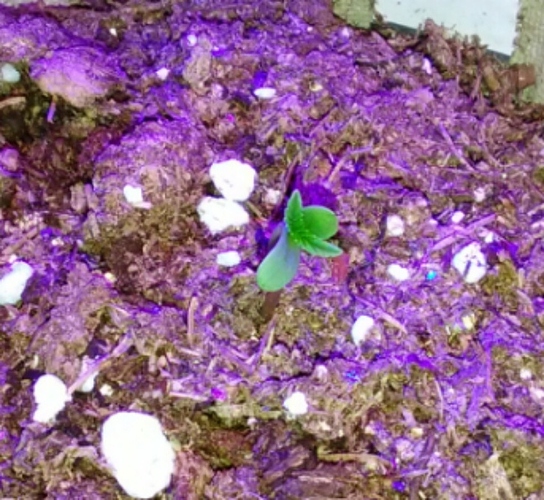 due to the cost of lighting these grows and what it takes to create a stable strain, it’s usually a lot cheaper to leave the breeding to professional breeders.

Absolutely. I’m just trying to discourage amateur breeders. It’s going to cost a whole lot of money and you have to grow a LOT of plants to see which are useful, and then you have to do a lot of inbreeding to get all the say indica traits you like with the one autoflower gene from the ruderalis, with seeds that breed true and don’t throw back to their ancestors. That last bit is the hardest part and why “strains” typically have so many phenotypes that are vastly different.

It’s almost a sure thing that any ruderalis gene that is on the same chromosome as the autoflower gene will be in your new autoflower strain. So there is very unlikely to be a 1% ruderalis autoflower. In fact cannabis has 10 chromosome pairs, so at best you would get a 10% ruderalis. It’s not impossible to isolate genes but no cannabis breeder is going to do genetic engineering like that.

Exactly. So pollenating a ruderalis with say a pure indica, would create will say 100 seeds. How many of these seeds will carry an auto flowering phenotype? Definitely not all of them. If you located one, and then pollenated it with say a clone of the original male, do you then double your chances of creating an auto phenotype and half the strength of your indica genes?

Cinderella 99 is one of my favorite strains. If you’re not familiar with the story on it you should check it out, it’s a pretty cool story. And one of very few the exact breeding technique is documented and shared by the breeder. Long story short, it’s the same plant (cinderella) back crossed to the point 99% of her own genetics. Hence the name cinderella 99. But there are still several different phenotypes. Which is exactly why I feel it would be very difficult and not make any sense at all for a hobby grower to attempt creating their own auto strain.

I think you can even see examples of this on here. Ilgm has as good of reputation or better at breeding than anyone. And you still see quite a few members have to flip their autos to begin flowering.

@dbrn32, @1BigFella, maybe having a new thread for this topic would be cool.

@dbrn32, my first auto took a long time to start flower…I actually dropped her lights down, and she began to flower…don’t know if it was coincidence, but I get what your saying. She is already a couple weeks over the norm for harvest and still has weeks to go. She is a nice sized plant, so I am glad it worked out this way. I moved her light time back up, and she stayed in flower, but I think it is interesting how precarious the auto flower mechanism is.

How many of these seeds will carry an auto flowering phenotype?

It looks like autoflower is a single recessive gene. So if you cross two autos, you will get only autos. If you cross an auto with a pure non-auto then you only get Aa offspring that are not auto but still carry the recessive gene. If you breed one of them with an auto, you get:
50% Aa plants with non auto phenotype
50% aa plants with auto phenotype

It gets a lot more complicated if other genes are involved, but you can see why so many strains have multiple phenotypes.

These two girls are just chillin, not doing to much as of yet. I ordered some beans from ILGM today in anticipation of the next grow! Also, I want to be prepared just in case…
I am excited to get my amnesia haze seeds; I can enter the bud of the month contest when the time comes