Hey good folks! Welcome to my first topic! Not going to camp or troll on others’ thread like last grow or two, figured get my poop in a group and do my own!

So the other day (Nov 3rd) I finally got around to transplanting the clones which rooted. Well, 5 of the 9 at least. I was going to do all 9 since I find it hard to chuck young ladies to the curb, but realized I will NOT have enough room in the 4x4! My priority on this run was to preserve the Death Bubba strain that I gave my future son-in-law last October, he gave me 4 cuttings mid-September?? that had started to flower. I had 6 cuttings of my Dutch Treat in the same state, pistils showing, so it took a while for roots to show and the plant to reveg.

So here we are…4 Death Bubbas (DB) in the taller pots around the edge, and 1 Dutch Treat (DT) in the smaller middle pot. Had to retape the rods on the walls of the tent to stop suckage due to the negative pressure in the tent, once these get bigger I won’t be able to get in there to do it and I’d be kicking myself (again!) lol! 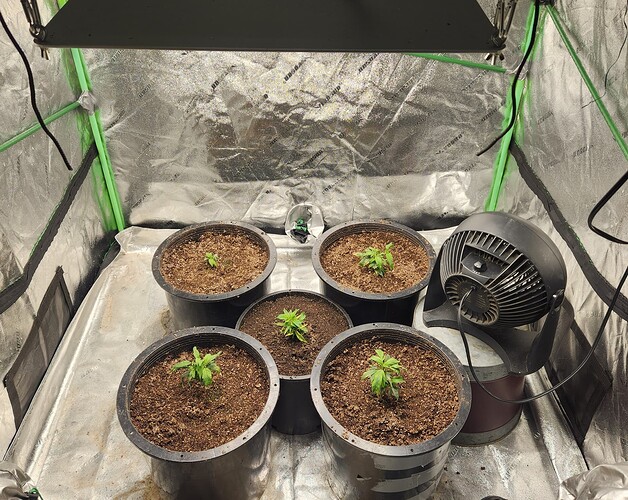 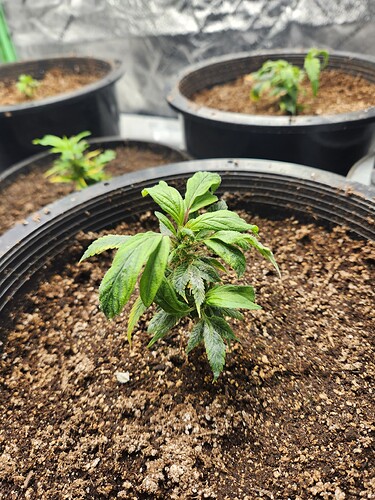 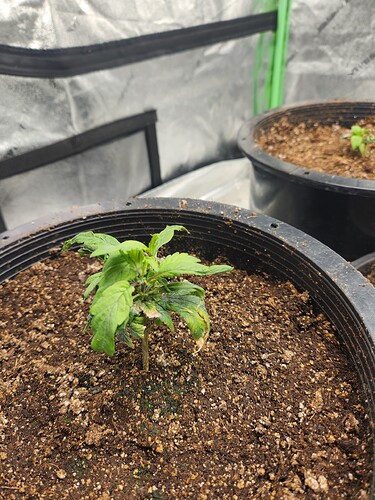 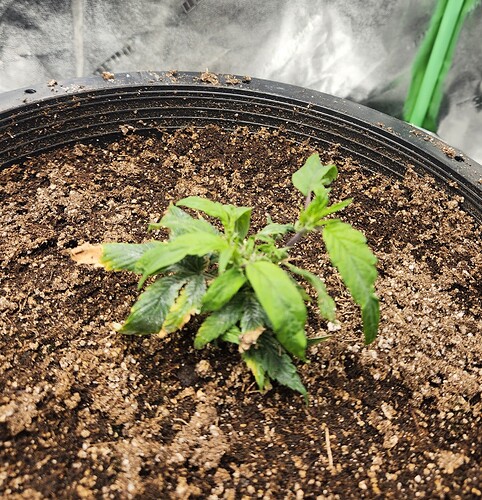 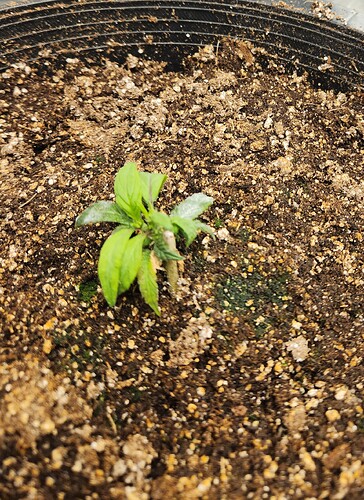 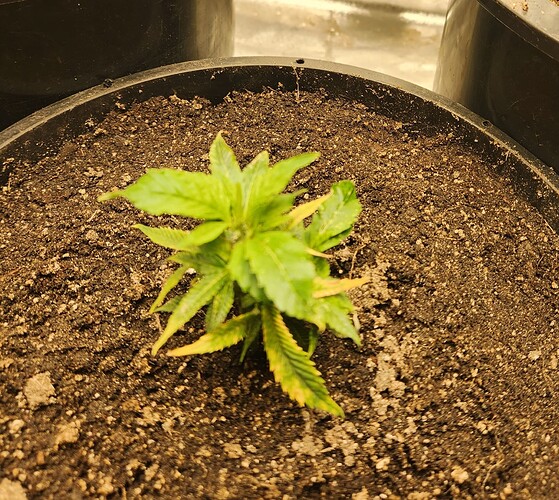 Just sprayed them with Hydrogen Peroxide/water mix at 50/50 ratio since they came with white powdery mildew. While rooting and revegging, the “buds” died and developed a bit of it.

These are in probably 3 gallon containers. I put a few inches of lava rocks in the bottom for extra drainage and air to the roots, then filled with moist Pro Mix HP. I plan on using Advanced Nutrients Perfect pH this run, and will mix up a batch in a couple of days when they need watering/feeding.

We moved my son and his gf back in with us this weekend, so he is going to learn about growing as we are going to Rome in a week for 11 nights or so!

Figure if he gives them each a cup food every 3 or 4 days while we are gone, he won’t be able to kill them in that timeframe!

I’ll try to update pics over the next week, but there will be a 2 week gap. Hoping when I come back it’s like Holy Crap! in a good way and they have taken off! They have doubled in size in the last 3 or 4 days already, if they do that again before we go and again while we are gone, I will be ecstatic! Plan is to let them veg until end of December then flip to 12/12, hoping to harvest end of March. That will give me 5 months for another run before the whole family goes to Sri Lanka for a month for son’s wedding.

And next October I will have a sufficient stash and will take the time to set up a hydro system like @HappyHydroGrower has.

Hope you enjoy this little grow, feel free to tag anyone else who wants to watch!

11 Likes
Am I behind schedule Day 20 (No Nutes) Autoflower
MeEasy what is going on now (Part 2)
Need input for perpetual Harvest
SynysterChris November 7, 2022, 9:35pm #2

Yeehaw! Will be an interesting grow for sure!
I freaken Love revegged plants, so unique and interesting growth in the beginning.
I’ve got a revegging clone from a lower bud stalk of a single wedding cake I grew, it surprisingly rooted in 7 days O.o
I call it daddy’s little mutant <3 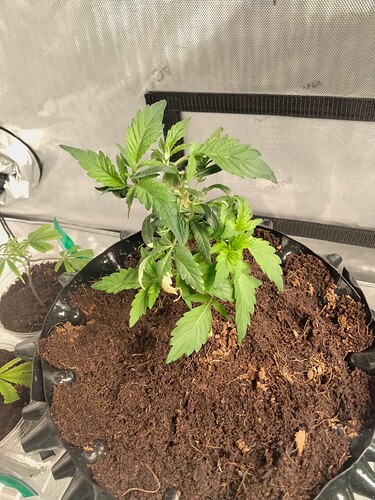 Watching this. While your gone, let your son know he can hit me up on insta if he needs any help.

Thanks @Docnraq ! I’ll only be a phone call away, so I’m hoping they look better tan they do now when we leave, and even better when I get back!

Awesome! FWIW you could’ve run 9 in 4x4 no problem. Just veg them out 3-4 weeks and flip them, makes for pretty quick grow without giving up much yeild.

@dbrn32 Yeah, they’d fit for sure. But the remaining 4 Dutch Treat aren’t doing as well, think 2 won’t make it. I’ve got lots of the Dutch Treat curing now, so only doing 1 with 4 Death Bubba (my fav

Oh, just hit the 2nd hand store that took over the hydro’s stock and selling it

I’m a bit north of you, Dave, up in BC, so the gas wouldn’t make it worthwhile for you to drive the 3 hours here! Most of the stuff they have is fertilizers and buckets. And a ton of HPS lights! No LEDs tho.
They have a bunch of PVC fittings all marked down, but I think I can get that for free when it’s time to go hydro. But everything is 1/2 price of slightly inflated prices, so still a good deal. The $12.50 I paid for the 500ml of Rhino Skin can be had for $20 online. But they have shelves of nutes left, unfortunately no Jack’s!

East of us they still have no power. Be safe and good growing to you.
I dropped five seeds from this years crop to see if they soil germinate.
I got plenty of bag seeds and bought some MauWowie from ILGM, soon to drop.

Hry Spudgunner love tbe new forum gl on tbe grow bro , ill be watchin , tag me in for sure. Im getting ready to do a setup like Happys in the next 2 weeks . I want to do an experiment to see if buds are denser in soil rather hydro or is it more of a strain thing. Ill probably start that end of next spring. The 1st grow in the new system i cant decide what i want to drop. Rdsknk, tang, bblgm , gdp, or purp kush, choices, choices. But definitely going to do a plant in soil and one in hydro when i decide so i know the strains are exactly the same

I was under the impression the bud density is more about the light than anything else. Tag me in your experiment please.

Today’s update, just before lights out. It’s been 3 days since the last pics, still haven’t watered or fed since transplanting into their new homes. I need to mix up some nutes for them and show my son how to water them when we are in Rome.

Group shot. Had to add the little space heater the other day. Pretty cold in BC this week! 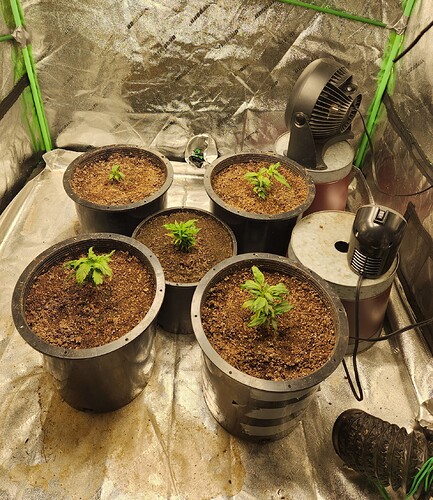 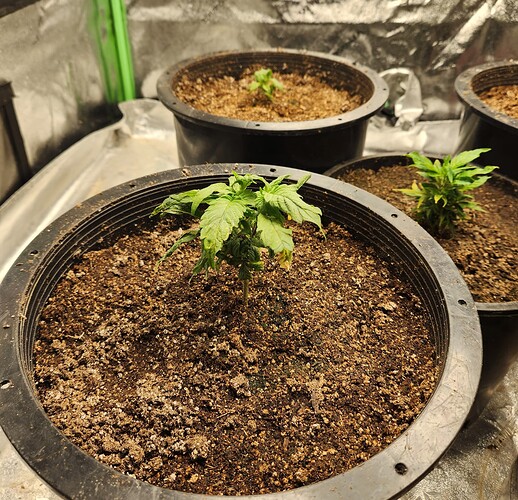 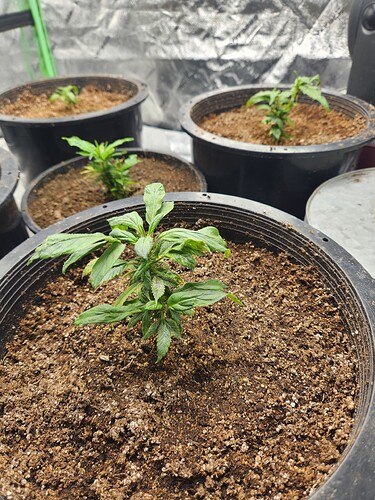 Rear left DB. This poor little girl should be bigger, but during rooting and re-vegging she developed bud-rot while trying to rid her of WPM. Had to cut her head off and let the second node become her main. Gave her a fighting chance, and she’s winning! 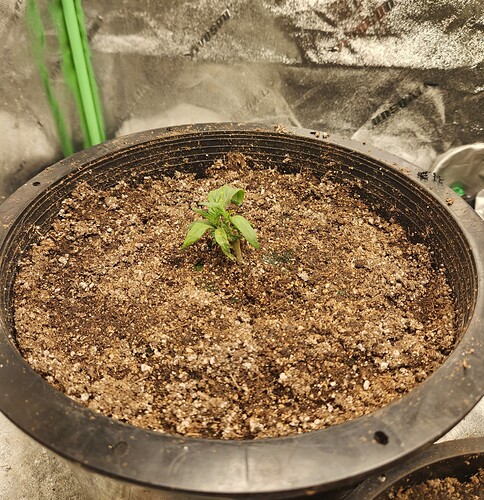 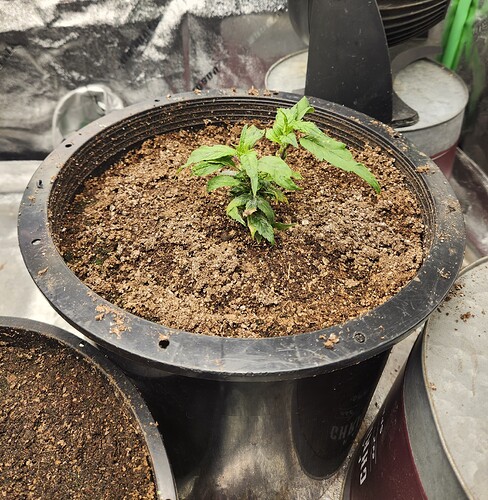 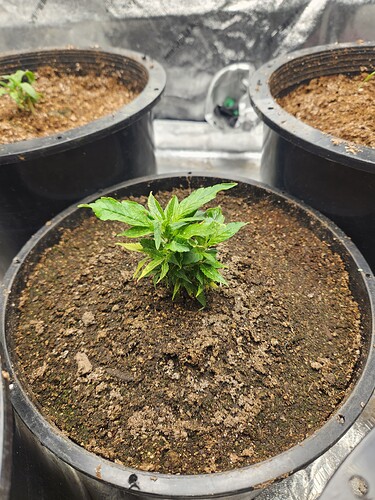 Thanks for stopping by! This will probably be the last picture update before we leave early Monday morning. Hoping when we come back on the 26th that they’ve taken off! Next update might be the 26th or 27th depending on how jetlagged I am!

Hey Spudgunner looking great bro, they should way bigger by the time you get back. You guys have a great trip my friend. Stay safe

Thanks Robert. Yeah, they are doing well. The dead shit that’s on them is from when they were cuttings, once they grow a bit more I will cut those dried leaves off.
Rome should be fun! Just printed out some of our excursion tickets…Hadrian’s Villa, Pompeii and the Amalfi Coast, and instructions on how to get into our room! No front desk, everything is carded and those are locked in digital lock-boxes. Crazy trying to figure out how to get in there! Gonna be fun tho!

Last update before the flight to Rome!
DLI was between 23 and 27, temps 79 rh 40%
They have taken off! From the first pics 6 days ago, more than doubled in size! 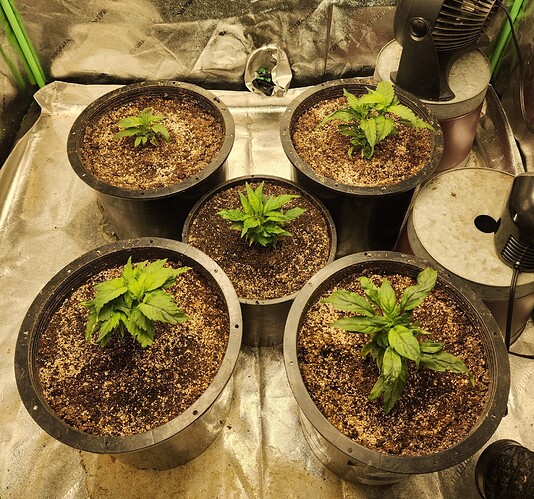 Front right DB, altho she looks more like basil or pepper. all her leaves are single and rounded, no jags! 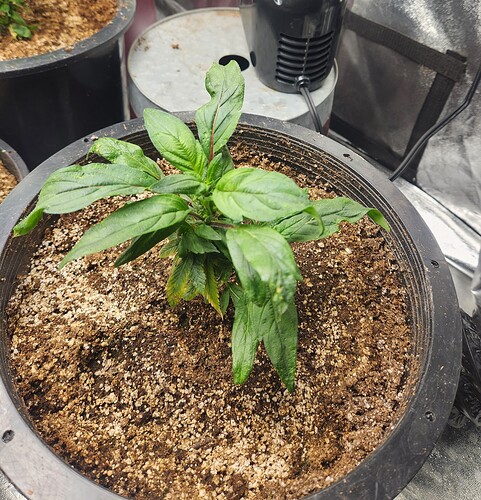 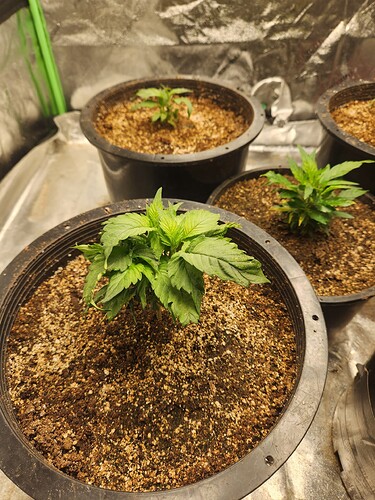 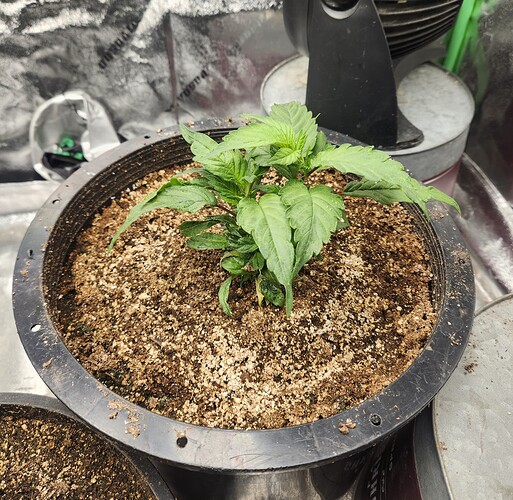 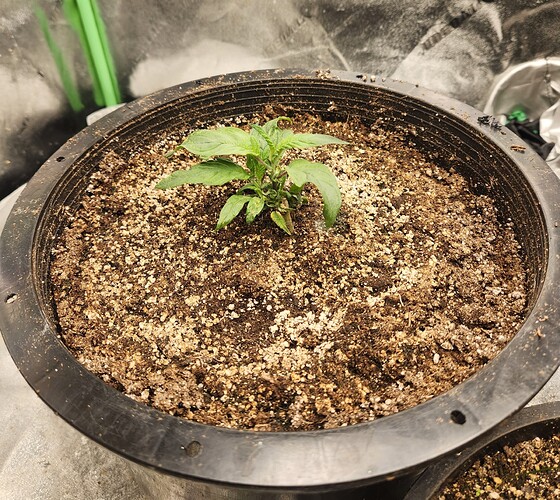 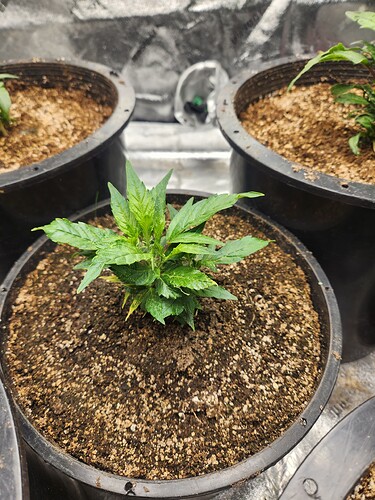 I can’t wait to see them in 12 days! Now they’re getting nutes and growing rapidly, son should water them in 3 or 4 or 5 days then once more before i get back, he can always text me pics of them or guidance. This 21st century is pretty cool!

Anyways, gotta finish packing, up in 7 hours, off to the airport! Woohoo!

Glad to see you are still growing and doing well. I have not been here in a while as you know. I would have direct messaged you this if I could have. The wife gave me a quit growing ultimatum if I post online about growing. I am sorry I have been away. She meant business. Things with her have chilled now that the crops are in. I am hoping to hop on more. I really enjoy the site.

Speaking of Hydro, this should make you laugh: 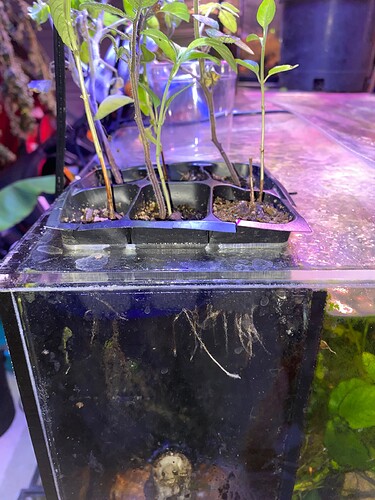 image1920×2560 417 KB
It’s a little nutrient stream for fish poop and giggles. I crammed a pony pack into the overflow tower of one of my aquariums after I removed the acrylic tower cap. Did some tomatoes peppers and basil, about 3 weeks old. Ph is way too high but the plants seem ok anyway.
3 Likes
DEEPDIVERDAVE November 15, 2022, 4:44pm #17

Happy wife, better living with her.
welcome.
What a summer.
Good Feet Store got my HLG upgrade money.
Found the Trader Joes, south of Everette.

So far, so good. Son has watered the ladies for me once, should be close to doing it again. I’ll get him to check on them when lights go on in a few hours.

Rome has been a blast! Thot I’d share a couple of photos I couldn’t resist taking…found a vending machine in the street the other day, pushed a few buttons to see what they had. 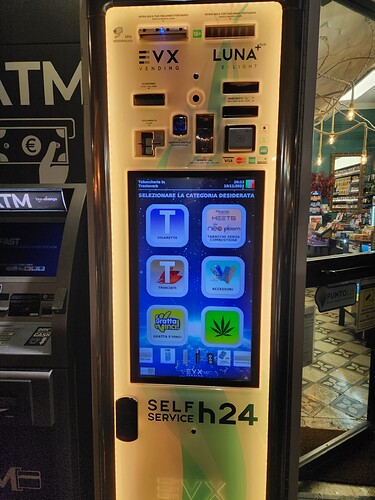 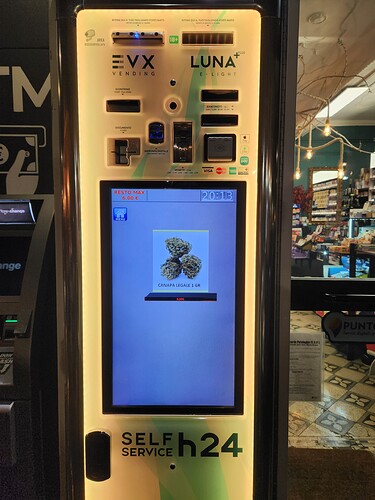 Mystery strain for 8 Euros/gram…a Euro is about the same as your 'Merican dollar, so $8USD and about $11 Canadian. I didn’t buy, no papers or matches, and you’re not supposed to smoke in public and I can’t puff in my room.

Need this in the states!

So I asked my son to water the ladies today, he sent me this pic of them 15 hours ago (I don’t know what day it is with this time difference!) 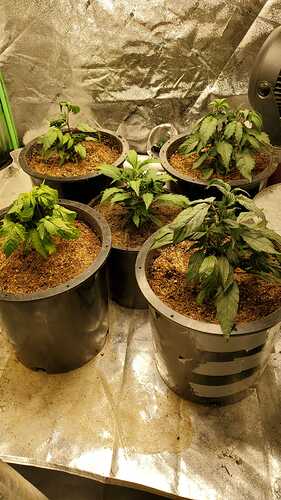 He said the front right one still looks like a basil plant, so I think I’m going to put a Basil tag on it and claim it IS a basil plant. Then I have my 4 legal plants and an herb plant!

I get home on Saturday and will start training them, maybe top them as well. Will also crank the light up a bit too and mix up a fresh batch of full-strength nutes. I didn’t want to set it too intense for them and then go away for 12 days getting burned.

Definitely grown in the last week!