So i just read an article that said spider farm is making hlg replicas at much cheaper prices is this true?

Most modern leds use the same diodes. Samsung. The only differences is assembly quality, hardware used, and warranty periods. 301b and 301h are the same thing. People may argue about that. It is what it is. Spider is moving towards bar style lights, hopefully hlg follows. Make sure you are looking at spectrums… blue red. If you are using 1 light for all around make sure it’s balanced. I also wouldn’t buy anything with generic or unknown drivers. You want to also pay attention to par map and coverage.

I agree with @Low about the diodes and all and I’m using a SF7000 with added UVA bars and it’s been nothing short of amazing for my plants. Good luck!!

Ok thanks for the update i noticed sf had 2.8 and par was just as good as well i was looking for uv light any recommendations to pare with spider farm? Right not i have 4 lights in 10’by 4’ tent looking to make a male seperate tent and ugrade the lights in flower tent wanted hlg but for the price i can get the sf 7000 and uv light so think thats the route!

Remember that HLG uses third-party spherical test data unlike everyone else so you are trusting the manufacturer to give you good data.

Yes im a firm beleiver in you get what you pay for i was gonna get a refurbished hlg but it makes me nervous my flowers look beautiful and are great just cant get the weight up nobmater what miracle elixer i use i got wall to wall nutrients co2 everything the only thing i can think holding me back is lights!

They may have similar led chips, lm301 but there is a big difference in bin selection. So to be fair unlike stated above, there is a different quality to the chips… they are guaranteed to not be top bin like hlg.

If there is a difference in performance I haven’t seen it. Doing 20-30 runs a year under hlg, spider farmer, mars. Side by side, similar wattage. They all pull about the same weight. I’d say the playing field is pretty even. In terms of service and warranty hlg wins by a long shot.

I currenty run viaperspectre p4000 mars hydro ts 1000 on one side of tent and on the other i think is growers choice 4 bar led (cant remember light brand and model think is growers choice) and a king plus 1200 watt light its a 10’ by 4’ tent so im guessing upgradeing my lights and adding uv will help with thicker buds i get great harvest just really trying to fatten up flowers also just got shooting powder i read helps so we shall see!

Gotta respect that response. Would love to see comparison in equal wattage to ppfd. Id be highly surprised if they were equal. Still prefer mine assembled in ohio.

Oh yes, American made is great. I’ve actually ran those numbers before with hlg 350r and mars hydro sp3000. dimmed roughly the same wattage as the sp3000 caps at 297. 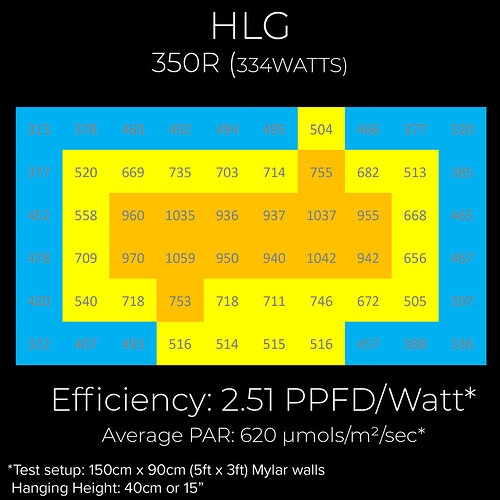 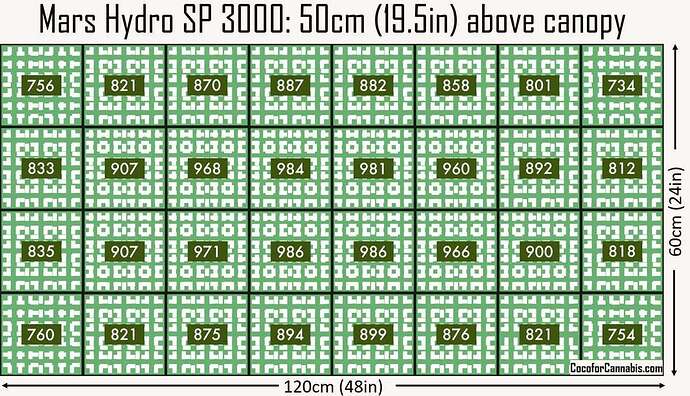 I really hope hlg jumps on the bar style lights, just as an option. Bet they would be gorgeous.

I admit that my knowledge on lights is limited. But I think that comparing a HLG light equipped with the QB288 boards to other manufacturers is a fair comparison.
But the HLG Diablo QB648 boards are in a league of their own. Just look at how saturated with LED diodes that board is, (648 on one board). Due to the high number of diodes this board it is never pushed to it’s maximum current rating. A single Diablo board is rated for 5000ma at 57 volts this equals 280 watts. The six board Diablo only pushes each board to 108 watts each, the 350R and 650R pushes about 160 each, and finally the little Diablo 200 watt single only uses 71 percent of the board’s capabilities.
This design gives us a much cooler running light with a longer life, better light penetration, and a closer canopy to to light distance.

I know theres not a doubt in my mind they are the better light i want the diablo scorpion or at very least the rspect but is it the much better for the $ is the battle i have? A spider farm se7000 with two uv lights include is 749 i cant even get a refurbished hlg light for the price that is just as good or i would buy it! Unless im missing something orva sale please correct me 8f im wrong!?

Unfortunately i made the nube mistake of just buying bunch of semi cheap lights realized i needed to get bigger tent and bigger lights so i did year or so later then realized there was soooo much more then just wattage or spectrum and now im already in the whole with all these lights…my girl is not happy about the money that goes into my hobby lol and im just into to make biggest most beautiful best smelling flower! (Its ashame i dont partake) i just love everything about the growing truly is the most beautiful and exciting thing to grow (in my opinion!)

@Growrr, I understand, my wife used to fuse about the money that I spent on growing equipment, and still does but is coming around. Now that she has seen 12 ounces come out of a 2x3. She now knows that given better equipment we could be doing a pound or two. Plus I have planted the seed in her mind, that with a bigger tent I could grow enough, that I could shut things down in the summertime. This will allow us to spend more time in the RV. Now she is encouraging to spend on going bigger.
Women go figure!

So the other light is a white rose bar led style light anyone know if they are any good (it was a gift) its got red bloom switches on itvas well.?

So i purchased the spider farmer se 7000 8 bar light with 2 uv30 lamps does anyone know how many uv lights your suppose to use its going in a 10" by 4 ’ by 70" tent its only going on one half the tent?(fyi the spider farmer says top bin leds! Someone said none american gets low bin…) also any recomandations on co2 i have a co2 365 bag and a pro co2 bucket but my co2 meter always says same thing? I have and inline fan maby im doing it wrong or something or meters are not accurate?

If you’re using HLG’s uv light or the same exact light being sold by someone else one is supposed to cover up to a 5’x5’ area. C02 bags are useless TBH. Other c02 systems only work in a totally sealed environment. Grow tents don’t fit that bill. Maybe they could with some work. Most people I see using c02 effectively have a totally sealed and climate controlled grow room.