Some leaves look slightly wrinkly and serrated edges turned up

They make 2-hole vents for ac units - that’s actually what that thing is for, so you can hook up 2 exhausts.

I was debating the inlet thing because I don’t want to have the AC on 24/7 it’ll eventually wear out I’m guessing, but if the shop air isn’t cooler than the growroom what the hecks the point lol?

Yeah ultimately you want your lung room (the shop) to be cool air because it’s gonna get pulled into the grow room, passively or actively.

Oh crap does AC eat the CO2 or something?

The efficiency of venting it I don’t have to worry about much; it’s a window AC unit that I mounted into the growroom wall instead of in a window. Its intake is on the front with the output so its recirculating the growroom air, and venting warm air out the backside(previously WAS just going into the shop, but with the expansion I’m going to rig it to vent out the window).

I’d love to not need it at all, and looking forward to the cold season when I won’t, but in this climate I likely Need it probably from April to October

And I dont think a big house AC unit cooling whole shop is an option, shops probably not insulated well and has a garage door… doubt I could ever keep the whole shop cool.

Great idea. On days that I do have to run the AC during lights on, I’d like to be able to close all vents at lights out to keep that cool air in. Even doing it half-ass just covering vents on my recent flower it did seem to help, growroom stayed cooler than shop.

Ones that attach to the back of a window unit?
Being meant to stick outside a window I didn’t figure anything would attach outside of me coming up with a redneck solution like a wood box to convert to a duct haha

you want your lung room (the shop) to be cool air

I truly wish it was doable but it would be like redoing a whole houses cooling system:/
Insulating walls, finding a way to insulate/get rid of the garage door,.etc…
Maybe someday but definitely not before having like 10 grand lol

back of a window unit?

Ah like the oldschool Oregonian window ACs? Nah prolly not. It would require some red neck ingenuity. I do believe it’s possible though. A square aluminum box and some reducers to duct it out some semi-rigid ducting. Probably wouldn’t take all that much effort, either.

Although if you’re pulling air from outside and blowing AC into the 12x8, all you really gotta do is figure out a way to exhaust the air from the top of the side opposite the AC coming in. So if AC is on the easternmost wall, you’ll wanna set the exhaust to leave out the top of the westernmost wall. Punching a hole through the ceiling is the easiest thing I can think of but ? Maybe you have other thoughts.

Yup exactly one of those, it was seemingly the cheapest option when I was setting up the first room. The whole backside is where it vents the warm air,
So yes exactly haha for lack of better idea(well, affordable idea) I’m thinking of sheet metal or something to just build a box-ish thing that slips over the back and reduces to ducting to duct to the window, which is only about a foot from where the new eastern wall will be. 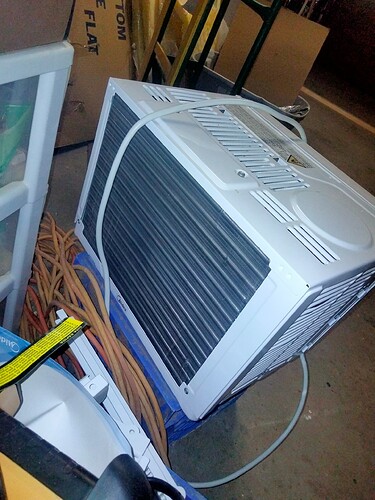 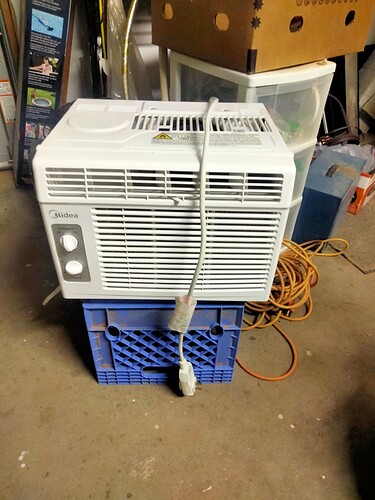 So if AC is on the easternmost wall, you’ll wanna set the exhaust to leave out the top of the westernmost wall

The old room is at the back(west) and the shop had a pipe going through the roof, donno if it was for a stove or what but it was conveniently placed so I used it, so those logistics are already lined up conveniently, the limitation is just that the pipe is 4".
Ive got an inline fan in the ceiling of old room ducted to the pipe, but yeah it’s only 4" and idk if that’s an issue or not. Could potentially buy a more powerful 4" inline fan to use with the existing ducting/roof pipe, but making another hole in shop ceiling sounds complicated haha

Although if you’re pulling air from outside and blowing AC into the 12x8,

Outside like Actual outside?, Or the shop, my lung room as you called it?
Unless it’s necessary I didn’t want to mess with trying to pull air from outside the shop, hassles using/venting/redneckRigging a second window, more complicated wiring stuff with timing to only take outdoor air when it’s cooler etc,…
So would def prefer just using shop air if possible,. It’s cooler than outside during the heat of the day and will be warmer on cold winter nights, just plain more “stable”. 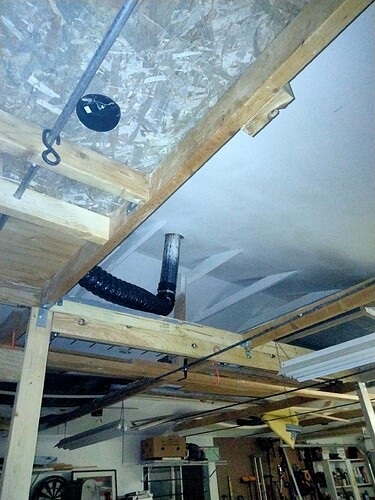 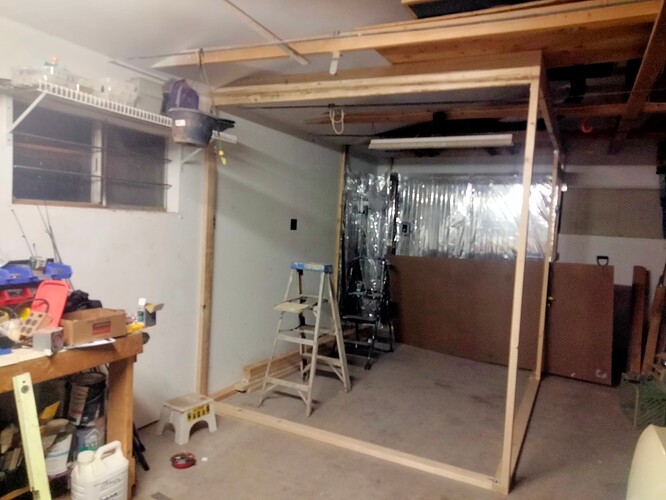 Outside like Actual outside?, Or the shop, my lung room as you called it?

Actual outside, but if the AC is exhausting outside, you can recirculate much more freely in the shop. It will be a few degrees cooler than in the past.

I’m not coherent enough to express why having a closed system seems problematic. Lack of fresh supply of CO2 ultimately, I guess

That’s the idea, to exhaust it outside so that it isn’t heating up the shop and undoing half of its own efforts haha.

Aaah so even with exhausting the back of AC outside and (separately with the roof vent) exhausting growroom air out, I should at least also pull new air into the growroom better than whatever it pulls in passively from exhausting growroom to roof?
I can definitely put in another dimmable fan in the new wall and will use Dbrn’s idea to stop light leaks, it would just be shop air blowing in. but since AC won’t be venting into shop Im guessing that’ll be okay?

It’ll definitely be better than what you had going on before.

Someday hopefully I’ll be asking questions about a 20x40

For now I’ll go ahead and get another fan to pull in air.
If I get a more powerful one with higher CFM, should the stronger one be exhausting air out, or pushing it in?

Oh crap does AC eat the CO2 or something?

Plants consume the co2 and it needs to be replaced. If you don’t run exhaust/intake to replace co2 you need to replace by other means. If you do run exhaust it expells your conditioned air and runs way more than it should need to.

Aaaaah okay. Yeah it was always kind of a rock and a hard place on what settings to use… for the most part I just put the exhaust fan on low while the AC was on, and went back and forth between having the inlet fan on or off cuz I didn’t know what was best haha.
The AC I don’t believe has any sort of thermostat to control it, just dials for how strong the fan runs and the “cold level, 1 to 5”. When that dials low it does something like turn the AC part on for 3 mins every 20 mins or something. So it won’t run more, the variable is just what temperature it keeps the room at. With the 8x4 I was just turning it on a bit before lights on and turning it off a couple hours into light cycle and a few times I actually made it way too cold lol, like 65°

But with making the room 3x that size now, I’m sure it won’t be as effective so I’ll definitely need to make my system more efficient(mostly thinking ahead, for next spring/summer) since we’re coming up on the season I won’t even need it.

I think I’ll go ahead and buy a better fan for the inlet, the one I had wasn’t adjustable, just on/off.

Do they make ones for walls that are slimmer than inline duct fans, so that it doesn’t have to protrude from the room a bunch, since I’ll be using your idea with a second wall to prevent light leaks?

You should be able to get a fan that will do just about whatever you need. What i visualize you asking for is something like ac infinity airtap? These don’t mive a ton if air, but should work for intake. Worsr case you could probably intstall 2 units.

I have been able to make all of my spaces work with passive intake, so not a lot of experience setting up intake fans.

This is what I found for that, shape-wise that does seem great. Slim enough to have room for the light-trap inside wall and if needed even another between the two.
As for how much air it moves, 120 CFM, that’s actually higher than my exhaust fan rated at 106?

Is that no bueno?

Im not 100% on how I could rig it if I need another exhaust, I only have the one 4" cieling pipe to vent from.

Passive intake was usually what was happening in the 4x8, I’d have exhaust duct fan running on low-medium and the AC cooling/recirculating for a few hrs a day, definitely seemed to work better without the intake fan turned on.

I wish the house was bigger so I could benefit from the human-comfort atmosphere,. But sadly that’s less realistic/affordable than slowly modifying the shop haha

I’m sure there’s a lot of ways to be successful. Just have to find what makes most sense to you and fits your budget.

Got a wall and ceiling up!

And took a shop light out, probably gonna use that wiring to add an outlet up high on the wall for my timer for lights.

For versatility in hanging things I just drilled holes in 2x4 studs every 6 inches haha, will get some small chain or something to loop into the holes.

Next step building a door! 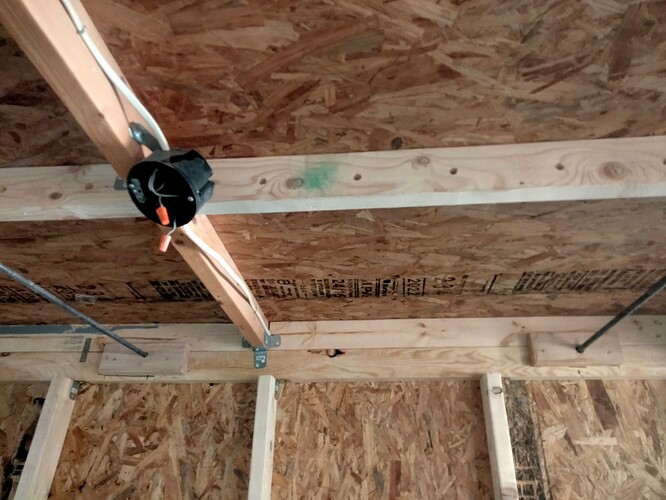 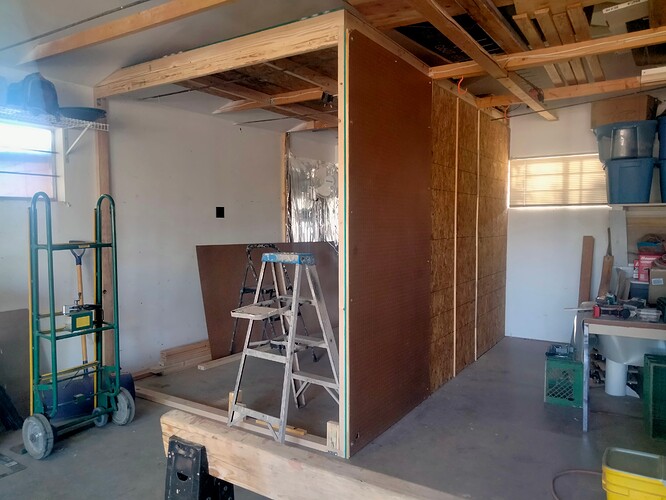