So far ok. I think

So i am new to growing. Started with 2 bag seeds. 1st 1 i planted is growing the hairs finally. I think i had thrips t first. Had silvery shit on it. No webs so not mites. Anyway… Got neem oil after i plucked a bunch of fan leaves off, which i dont think i needed to do after i used neem oil. Using fox farm soil and nutes trio. 3 100w led full spectrum 2 65w full specs and an 80w led tentacle arm light which has different settings. Lmk if its

Your plants look good, I hope that you have enough light to finish them.

If added all lights have 510w. I know you dont actually get all so im guessing at least 400w. Is that not enough?

You will want to look at the actual wattage of your lights. If you do have ~400 watts you should be fine. Don’t use the “equivalent” watt numbers because they are exaggerated and don’t represent anything useful.

Ok cool. I will look into it. Its my first time. I plan on getting a better light set up but so far everything is diy. I made my tent out of pvc and used. Dollar store shower curtains to wrap. Took 2 per side doubled up so have no light leakage. Then since it sits in a 3 sided corner. I got a blackout blanket to cover the front of the corner so it is extra dark. I an inline fan for my bday and need to get the carbon filter soon. But im happy so far. I did have the stem snap when i was training … Mu heart sank. But little plastic wrap and its stronger than before. Thanks merlin44 for your help

Just one more light example for you:

One of my commercial fixtures (no longer used, I build them now) is called a 2000 W but draws 390 watts. It does not perform as well as a 340 watt fixture that I built. The point here is that it is no where near a 2000 watt light and it is certainly not equivalent to a 2000 watt light. I run over 2000 watts in my main rooms and lights in the neighborhood dim a little when they turn ON. ROFLMAO

If the name plate or package does not have the watts and amps listed, then you will need to measure the actual draw. I don’t know how accurate these are but one inexpensive device you might consider is linked below. Any similar device will do, they might even sell them in one of your local stores. 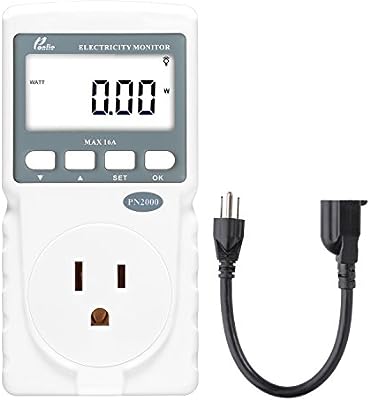 I suspect that there are cheaper devices available as well.