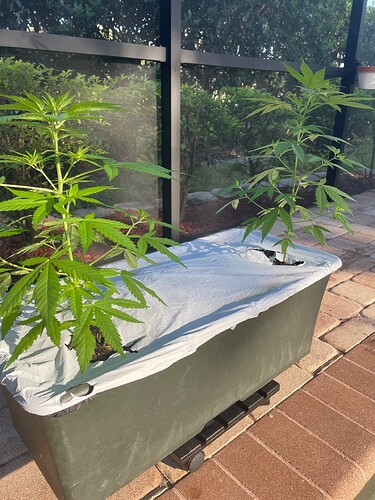 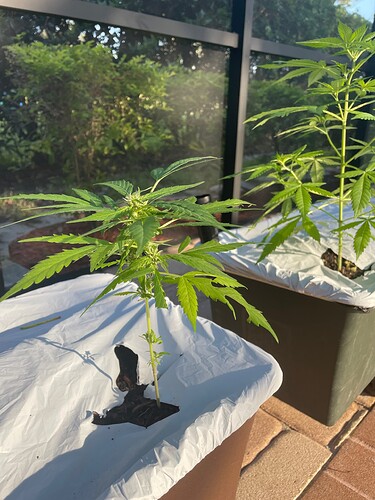 image1920×2560 389 KB
The bought 10 seeds of Silver Haze feminized. Grew 4 plants, one I pulled as the plant stopped growing and had yellow leaves.
The largest one while growing in first month stopped growing and the other 2 in different planter took off and tripled in size on two weeks. The smaller one know is budding and it’s only 6 inches high…I did not order self flowering seeds.
The one budding has 3 fingers on its cluster leaves, which the other two of same seed batch have 5 fingers in the leave cluster and NO bides yet…so it seems seeds were mixed in on order and I’m wondering if the two plants with 5 cluster leaves are male plants?? The plants all started in soil mid August. 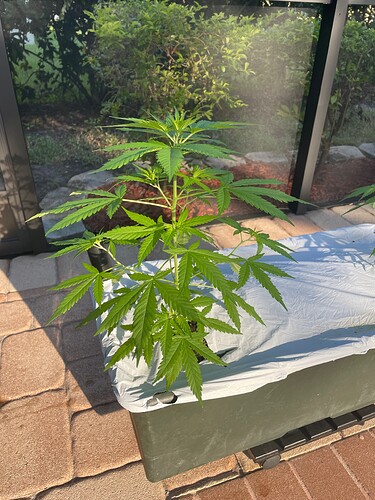 I don’t think you got the wrong seeds or different seeds. It looks like you have these plants outside and have just reached the part of the year where they flower naturally. Once they start flowering vertical growth is pretty much done and they spend most of their energy on flower development.

Hard to say why the one turned yellow, but that is usually from lack of nutrients or a ph issue.

I somewhat agree with @dbrn32 … the problem I see is their light availabllity… They arent getting enough against any wall. And if photoperiod like dbrn said. They would initiate flower. The only part of his statement I disagree with is vertical growth. Given the right amount of nutrients I quadruple height after

… or more. Have a blue dream surpassing a 5’5" high light. As we speak. Was less than a foot tall with 1.5 from pot to floor. So to break it down. It went from 1 ish feet tall to about 4 feet. After flip. 5’7" if you include the pot and lifted grate.

Also. Why are you suffocating your medium? Did/do you have a mold issue?

I have the same planters. Don’t use them for that reason. And you have also covered the surface. Suffocating them more

See… Would never use them for cannabis… 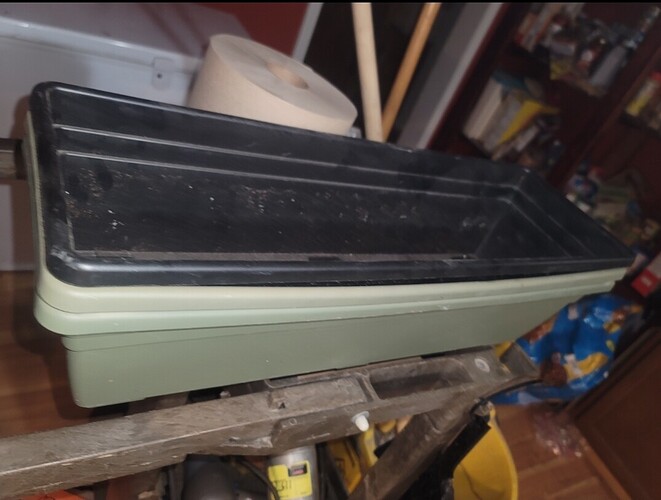 I have a custodial cart at the inlaws in the garage for toting tool boxes and a microwave from truck to no sites. Lol. They don’t supply a microwave so I have a cheapy I lig around from job to job it gets left in 1 spot til job is done. It’s a community work microwave. All the guys love it especially the Mexican guys who bring in burritos and stuff their ole lady’s make for them

That makes me think of Mi Amore. Was a running work joke. Her old man died in Mexico years back. Before she got out. Her son hated me though. So even though there was a thing there. I wouldn’t be the one to cause a rift in her family. Oh… Mi amore…

I only know a few Mexican words. Taco Taquito burrito chimichanga guacamole that’s about all I can think of right now.

Mi amore would be “My Love”

So consistently. I said to this woman. “My Love, I don’t understand.” And it was an inside joke that ran well. Obviously. I reminisce on it fondly.

Occasionally I’d bust out some Latin to get that

from her. Since I did spend a couple years studying language. Always made me feel good. Since Spanish speaking people have more appreciation for it than English. Even though it’s closer to English…
English is fairly complex. Latin is vastly.

Adams family credo = we gladly feast on those who would subdue us.

Ne conjugare nobiscum : “don’t f*** with us”
Recta non tolerenda sunt : "no a**holes will be tolerated’

My three favorite Latin phrases. For you all.

The only part of his statement I disagree with is vertical growth. Given the right amount of nutrients I quadruple height after

… or more. Have a blue dream surpassing a 5’5" high light. As we speak. Was less than a foot tall with 1.5 from pot to floor. So to break it down. It went from 1 ish feet tall to about 4 feet. After flip. 5’7" if you include the pot and lifted grate.

After flip and after flowering is two different things. This looks like an outdoor grow, there would be no flip involved.

For and indoor grow, if plsnts are mature when “flipped” is typically about 3 weeks before fill flower sites are present. How much vertical growth do you see after that? It’s usually not much.

. That one blue dream has stretched for well beyond 3 weeks… Granted it’s not my baby. I don’t even like it.

Has definitely gained over an inch in past two days. Since it now surpasses my light. infact. They woke up 10 minutes ago. Bet she got even taller. Time to feed. Greedy ho. 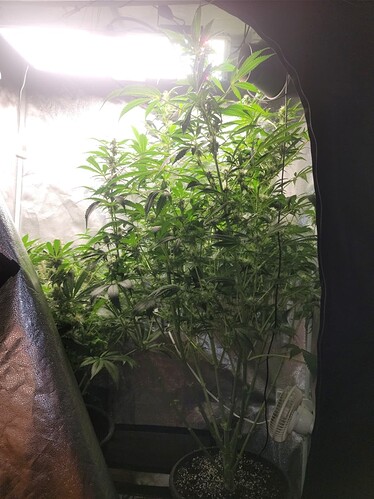 Edit. Erm. Woke up an hour ago. Time for amendments*
I feed with amendments an hour after initial.

That would be over 4 weeks since flower. 6-7 since flip…

Your plant wasn’t mature when flipped, explains why you feel the way you do. Having overgrown your light will just increase shading on larger portion of your plant, and cause more stretch. Doesn’t contradict what I said at all. Just a difference in understanding of what plants do and why.

dos cervasas por favor and donde esta el bano are the only two phrases
I remember from four years of Spanish.

I fully get what you are saying. I also contradict that this plant is twice the size of this one… Which was almost finished in the same amount of time… that this one has been growing… 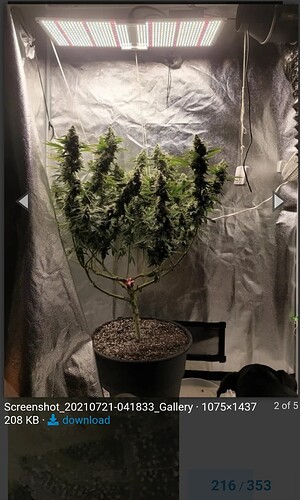 So you want two beers and the bathroom. In which order?

English is my first language…

LOL. English is my first language. I’ve tried hard over the years to learn others but only know a few phrases I don’t have to translate in my head which really slows down a conversation. Thanks to a construction job I did learn some great phrases in German, French, Russian and Arabic.

I spent two months Russian Language study at the Moscow State University. I did 5 years worth of study in 2 months. Yup it was intense. The experience…priceless.

And @dbrn32 I can say this. My Sativas continue to stretch even through flowering. Now my Indicas pretty much stop once flowered.

That is the seeming trait. I notice they my sativas reach a pinnacle then shrink while fattening up. But they grow vurt up untill they point. Which that point is flower week 6-7. Seemingly even with a long veg. Like my Skywalker. Which is still on the up up

Yes they are outside but why would one stop growing and the other 2 have tripled in size compared to the one that started to flower? Same soil, light…etc.
Why does the runt have only 3 leave clusters and the larger 2 have 5 leave clusters…tells me different strains?