Thats the reason why went hydro. No watering! Grows faster and you’ll b more dialed in with the nutes. Just keep in mind that you will need alot more equipment (air pump, chiller, ect) but i love it! once u setup its easy.

Yeah, i saw a youtube vid on Dutch Bucket system…looks super easy and cheap to make. I posted a link on @robert365 journal. I have to take a break next September when my son is getting married out of the country, won’t have anyone to take care of anything I have going for a few weeks, so I can shut it down for a couple months and reconfigure everything. Not too worried about the costs of things that are necessary, I can get the plumbing stuff cheap, offered an air pump and water pump already, so it’ll just be the big tote and chiller and wood to make the frame to put my tent on, Just spent $666 on a new light last month, so not much else to get!

Oh yea you’re pretty much set . Go for it. U won’t regret it. Hey what light did u get ? Do u have an idea of your future setup?

I think so. I’m going to build a 2’ tall platform for my 4x4 tent and do a Dutch Bucket system. It’s in the garage, have a 9ft ceiling and 78" tent, so rather that build a whole frame for the extra 4 or so inches, much easier. I’ll just have 4 plants, our stupid legal limit (but at least we’re legal!), but I’ll have the reservoir outside the tent so it can be large. They have Christmas Tree totes that hold 42 US gallons, 193 litres that would be perfect. My future son-in-law is a plumber, and I’m a jack of some trades.
I got my light from Grow Lights Canada, specs 480 Watt FB288 LM301H 3500k + 660nm + UV +IR LED Fusion Board Light DIY Kit (D#OX1LRFW) x1 CA$594.98 $666 after taxes Canadian delivered, $490 USD. I would have gone with the Green-beams GB4 if they delivered to Canada, but happy so far with these. Meanwell driver mounted outside the tent as I got 2 extensions. AC fan and filter and some interior fans.

Great! Hope everything works out well for ya. Its always good to have someone in the family with a trade. Plants really grows fast and soon run out of head room. Kind of a problem I’m dealing with now. Some of the Sour surpass my light😬. 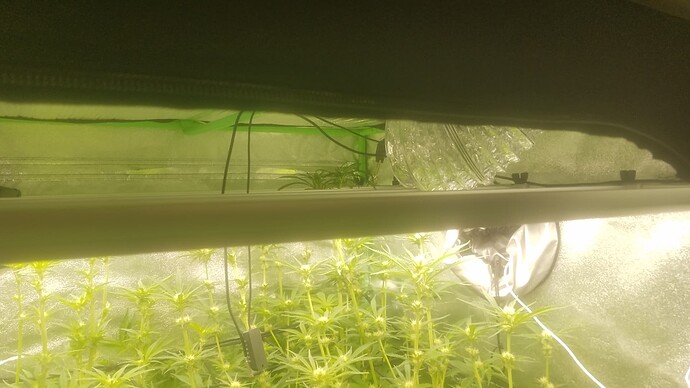 @Spudgunner hey brother do youbplan on staying with AN NUTES in your rdwc setup, im trying to see if i want to continue with yjose in mine or switch to something easier to mix and hit ppm targets

@robert365 I think I’ll switch to Jacks and Hydroguard. AN is pricey, not that it bothers me much, but I think it provides tooo much N late in the game when you want it to drop. I emailed them about it and they said use a lower strength and use more of the additives (Bud Candy, Big Bud, etc). Which is what I’m doing now to finish the tent ones off, either 1/2 or 2/3 strength.
Ya, it’ll mean buying a PH and TDS meter, but if I use a 40 gallon totes, it should still be way less work. And better results!

U won’t regret it switching to Jack’s. Easy as hell, with great results and u can use your additives with it .

Welp! I made my tent into a convertible 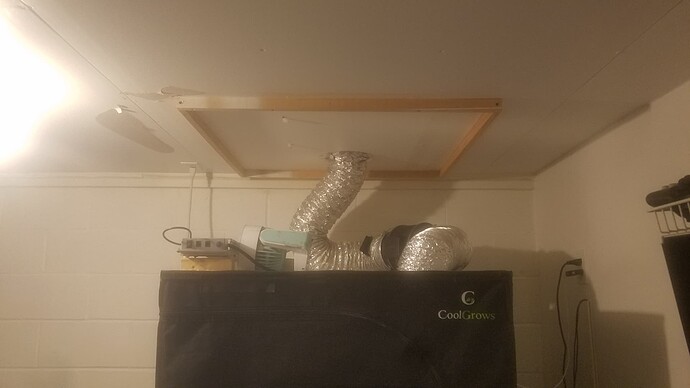 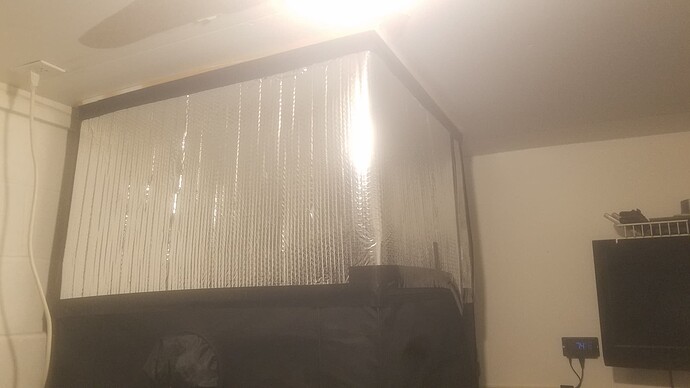 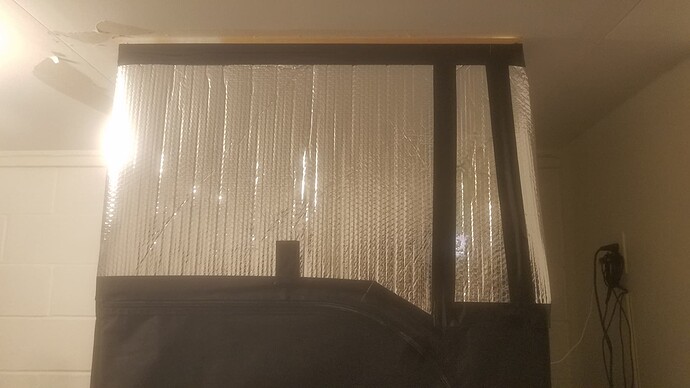 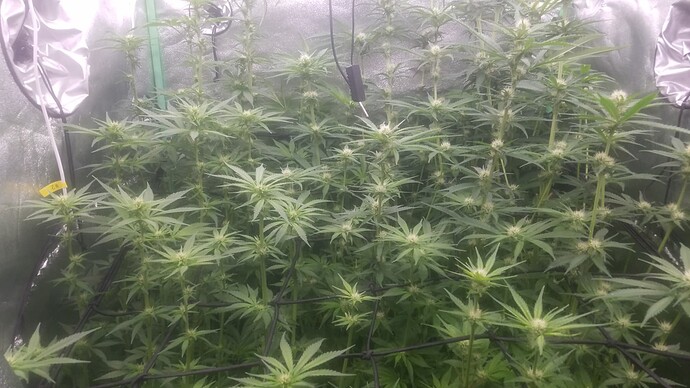 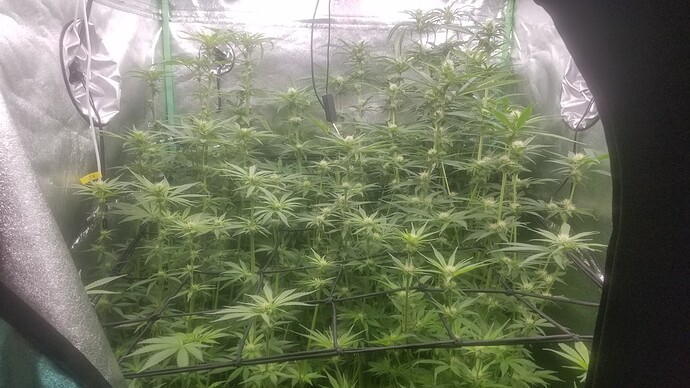 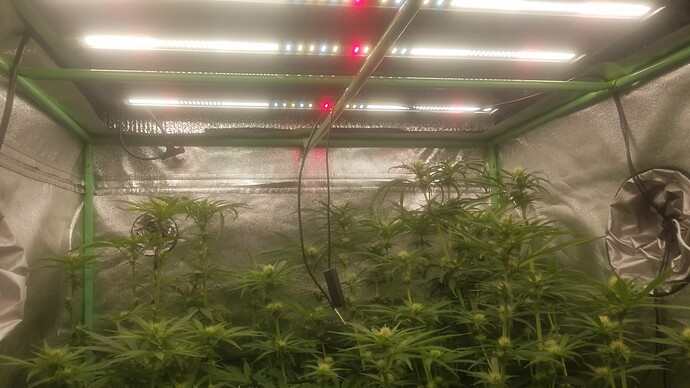 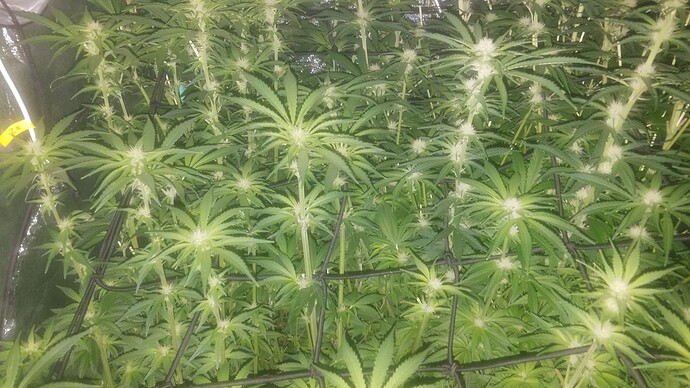 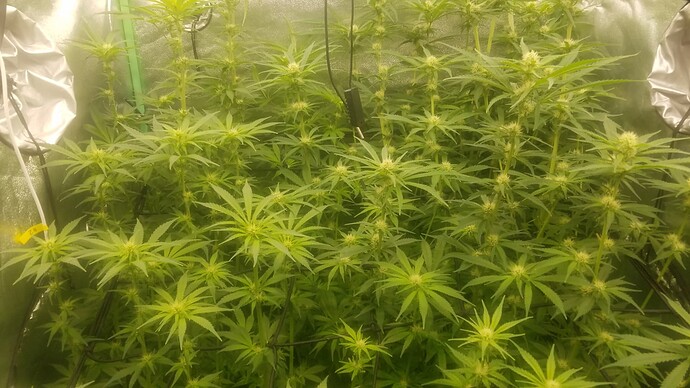 A little update. 1 wk after defoilition. 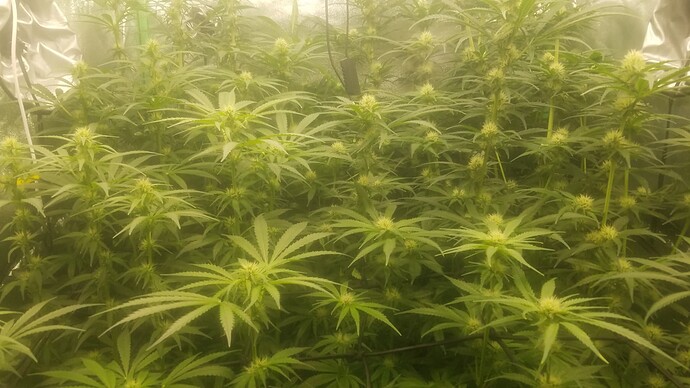 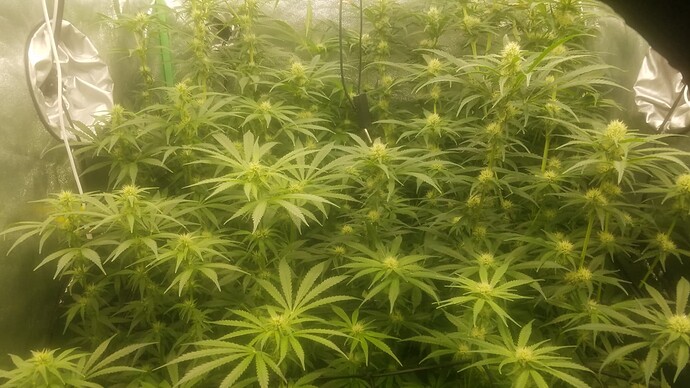 Time for an update 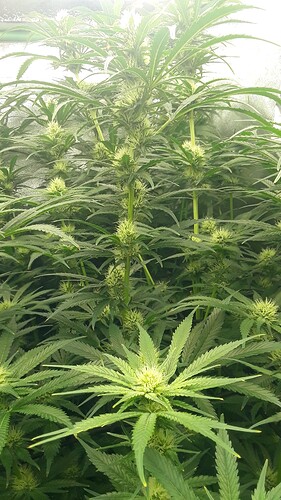 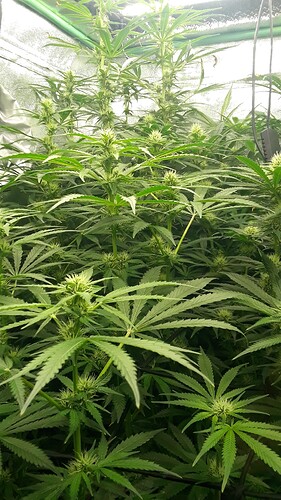 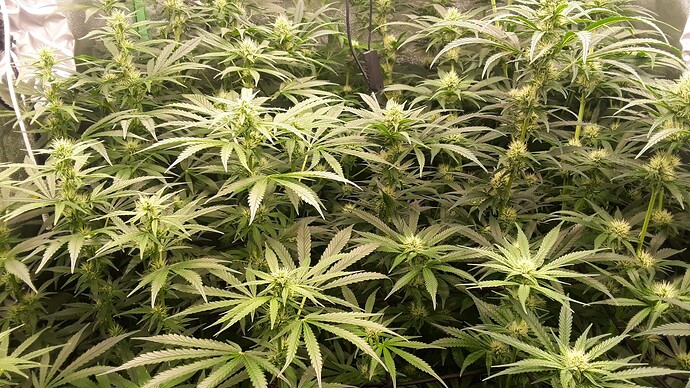 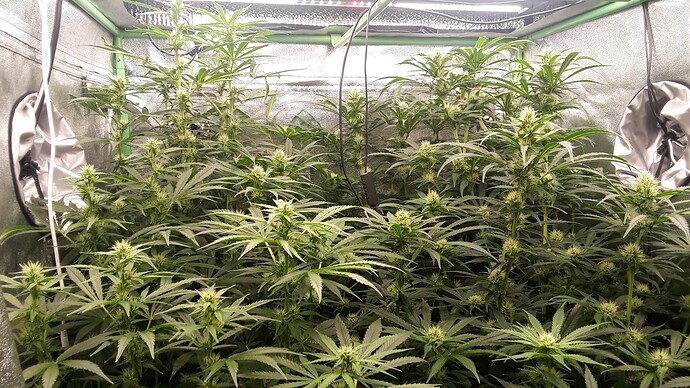 Geez didn’t realize how shitty my phone camera was taking pics compare to these. Time for a new phone ugh.

Hey growmies, I have a question. So I have two devices monitoring the humidity, they’re both giving me two different readings. Inkbird showing 60-62% and the acinfinity 70-72%. They are fairly close to each other as shown in the pics☝️.Which one should I go by? @LateNightGardner @Spudgunner @HappyHydroGrower @thecount13

I’d raise them up just a touch. It almost looks like they might be touching the leaves? If so, that could give a different result.

Now that’s question that could be hard to answer. I would have to consider calling the manufacturer and asking for a replacement.
I think most will place the sensor at canopy level in a shaded area. There are microclimates within your tent. You can move your sensor around to find where your high/low points are.
I have Sentinel environmental monitor system and two Govee Bluetooth Hygrometer Thermometer
Govee Indoor Hygrometer Thermometer 2 Pack, Bluetooth Humidity Temperature Gauge with Large LCD Display, Notification Alert with Max Min Records, 2 Years Data Storage Export for Room Greenhouse, Black

And a Sentinel Controls monitor

I have the Sentinel and one Govee the back right corner of my big tent. This will give me a general idea of tent environment. 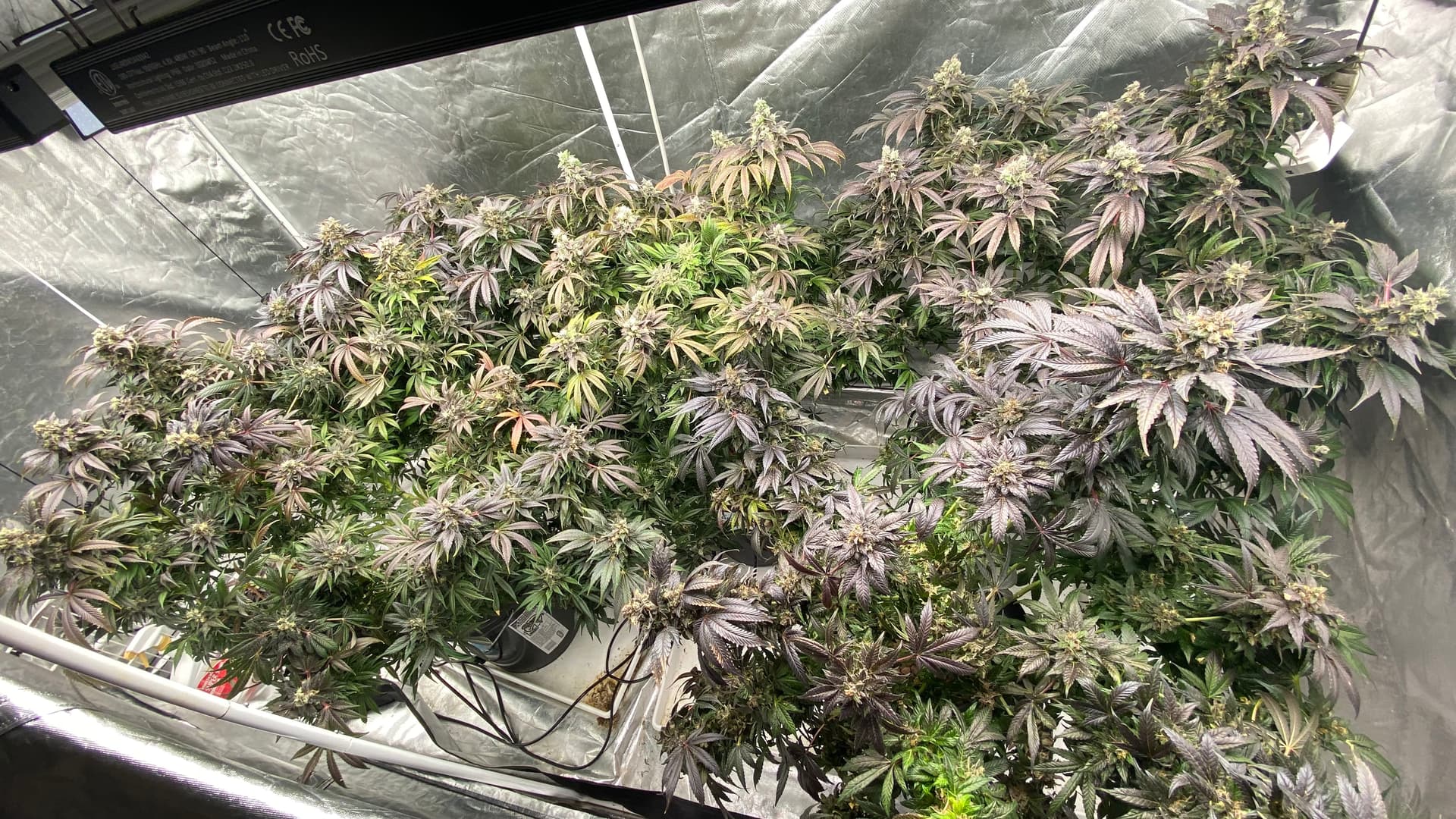 Try moving your sensors around to the perimeter of your tent. One or both are not calibrated correctly. So it may be time to invest.

All great responses to your question. Maybe go with one device and have grow accordingly (do what you need to do to lower or raise %. Just my thoughts happy growing

Get a third device and average… I mean seriously, what can you do? I know the frustrations of trying to get a consistent reading. You just have to experiment IMO. I’ve heard great things about the Govee hygrometers. If I buy another, that’s what I’ll try next.

Hey thanks for the reply growmies. @Spudgunner , yes that’s what i thought at first but no its not touching leafs. I did moved it sensor up more

great work​:clap:. The Govee? How’s they’re product. Might get few and they’re wifi! Oh yea !
But I will move the sensors around and get an average . Thanks for links. @thecount13 thanks will do. 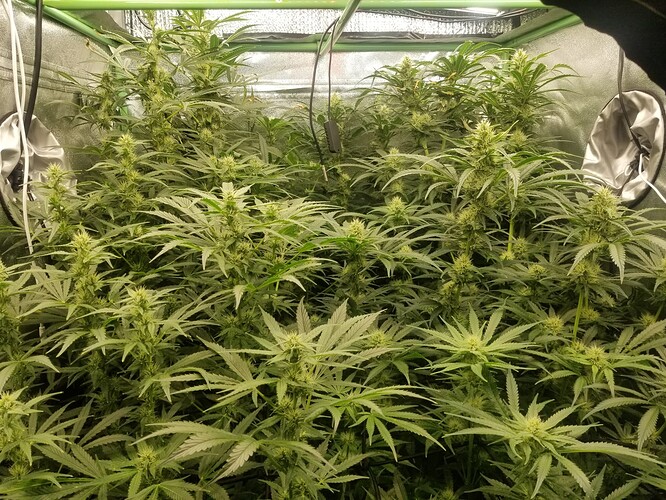 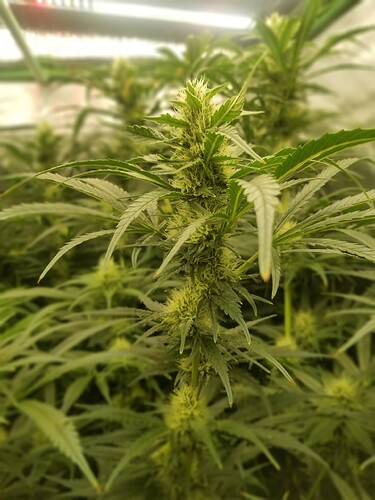 Ugh .I had to move the light up again. GG4 caught up to the Sour diesel on the right and surpassed it .geez.