All the talk bout Lighting is great and got me thinkn. Mite be greenhorn ??? but, what is the benifit of going with the QB’s everybody is raving about? Iv seen where these lights produce huge stacked flowers so the yeilds are definitly going to be larger. My main question is, is that the biggest benefit Or will the QB’s also produce higher THC,CBD, Terpenes etc, levels in the final buds? Im a grower for personal use so the yields are not as important as is the potency.

Less electricity since they put out higher light volumes with less wattage. Add that to the great yields and lower heat than HID and there’s not much else to say. Oh and 50,000 hours of life expectancy. It’s one of those things if you’re buying new you might as well get something that saves money over the long term and does a better job than most other options.

And do you actually believe they produce more? Do they produce denser buds? I realize less power and heat, but like @PigmanBBQ, I am curious also to a comparison between the QB and HPS.

I don’t have a comparison. Heat was my main issue. Do they produce good plants. Yes. But it’s literally impossible to say better or not because no two plants are the same. So no one can prove one way or the other. Now people that have grown enough and have averages might be able to see a increase in running averages but that’s nothing scientific. But I can say I’ll never have to change a light bulb or worry that a bulb will die in the middle of the night for a quite a while. But you’ll notice I didn’t say they were going to increase yields. Nor did I say they’re better than hid for everyone. But I can prove that they put out more light watt for watt. Because that data is proven.

I hear you, buddy. I totally get the part about the electricity and heat. The bulb thing also. The QB to replace a 1000w HPS is approximately $750 plug and play. I have 2 lights. That’s $1,500. I’m wanting to make the jump, just wanted to see if it was worth it

Yeah it’s a tough call. There’s people that say that they seen a difference but because of plant differences to me that’s hard to prove. I’m happy with what I’ve got and can’t find any negatives other than intro cost. But their longevity and energy savings hopefully make up for that in the long run. That’s why I say new buyers. It’s harder to justify if you already have solid working lights.

I have heard people say they get tighter buds with the QB. Have you found this to be the case, or have you ever used HPS?

I haven’t tried HPS. But I can say that my buds I just harvested were hard as rocks. And the growth was dense if not almost to dense on one plant. I harvested one auto last night that fully trimmed has a wet weight of 2 pounds 4 ounces from one plant. 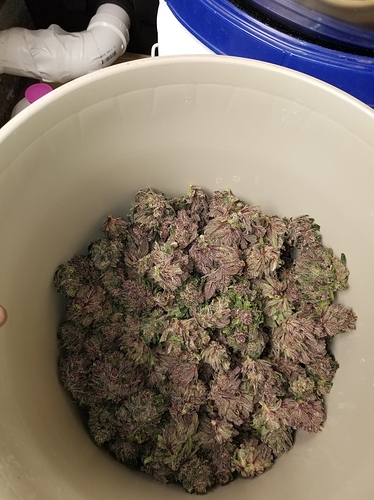 Looks good. How much is that dry? I’ve never done an auto

I just cut it down last night. But should be around 9 ounces.

I’m thinking that’s pretty good for an auto, based on what little I’ve seen.

Yeah it’s on the higher end for autos. My next one to harvest will probably be in the six ounce range dry. But the other two I had i stunted them early on so only about 2 ounces each on them.

@Grandaddy013 @DoobieNoobie. I’d be curious if anyone has gone from hps to qb growing the same strain has noticed anything completely different. Yeild, potency, density etc

There was someone that made the switch. But I can’t think of who it is right now. And I can’t remember much about yields. I can say I’ve never seen anyone complain once they got them.

I have no don’t that they are awesome lights. I’m set up with the MH/HPS system now. I just want to make sure before I trash what I have, and spend that kind of money

I am a little embarrassed asking,but what is QB? I am courently running a cmh in one room and a 600w ceramic hps in another. My electric bill is higher than my gf wants it to be so she is making me shut down one of my rooms maybe with a different light I won’t have to

QB is a quantum board from Horticulture Lighting Group. Your CMH is pretty efficient lighting. So sadly you wouldn’t gain a whole lot of savings by switching. That’s one of those scenarios where you might have to decide which is better… the grow or the girl lol. Don’t tell her I said that.

I have noticed a HUGE difference switching to QB and building my DIY lights, that they have denser buds than the blurple panels, but I’ve never run MH/HPS, so I can’t say the difference between those lights and QBs because I haven’t ran them, personally

Thanks @DoobieNoobie I think maybe the grow lol