grower.
I have experience with some basic guerrilla styled outdoor grows but have
discovered that indoor growing is much more technical. I’m really enjoying the
learning process. However, in the wild, I never really messed with any training
strategies and just let the girls do their thing. I was hoping to get the opinions of
those in the know about pruning. I fim’ed some plants and topped others to observe
the different results. Here is the dilemma, I have MASSIVE fan leaves. The
ones on the bottom don’t bother me much because A: they are on the bottom
and B: they extend beyond the plant so far that the don’t block anything.
However. the two uppermost fan leaves are still very close to the plant and
block pretty much ALL of the light from the lower branches that I would like
to catch up with the freshly topped apical dominance. Is it or is it not OK to
remove only the upper two fan leaves to accommodate light penetration to
the lower branches? They recovered well from the first haircut, and I’m positive
that it would not shock them. They are strong little suckers! haha The question is more along the lines of will the slight opening the canopy benefit growth from the lower nodes? One strain that I am growing is known to hermie if stressed too much during flower, so I would like to nail down the basic structure long before they flower…Thanks Fellas!

You could LST them out of your way. Just a thought.I would recommend doing it that way as opposed to removing a Functioning Fan leaf. I am sure more veteran grower’s that you have tagged will be along shortly. Good Luck!

Was it your pic that had the 12 inch fan leaves on it?

No, mine are closer to 10". lol For what it’s worth, all branches have well established leaves aside from the big ones in question.

Then it’s do able but you got two options. Option one hit it hard all at once will cause some stress, but it’s done. Option 2 start in stages top, middle, bottom will also cause stess but less.

I had planned on only removing the two large fan leaves at the top to let some light down below. Maybe I’ll try one and see how she responds?

Just remember take the leaf not the branch.

@SKORPION oh yeah for sure! The object in removing the fan leaves was to allow more light to that corresponding branch.

Other option is to tuck it so the new growth gets light. This is what I usually do.

Check this topic out. Maybe it will help Northern Lights Second Topping Illustrated
As part of my northern lights grow journal I did a separate thread on the training and trimming I did.
I did a second installment titled Northern lights training continued
It simply shows the clean up I did in preparation for flipping to flower. The same plant is in both threads. The just of it is, over the week between the topping and subsequent clean up, how much it recovered and the amount of new growth.
Here is a overview (the condensed version). These are all of NL #2
5/18 before second topping 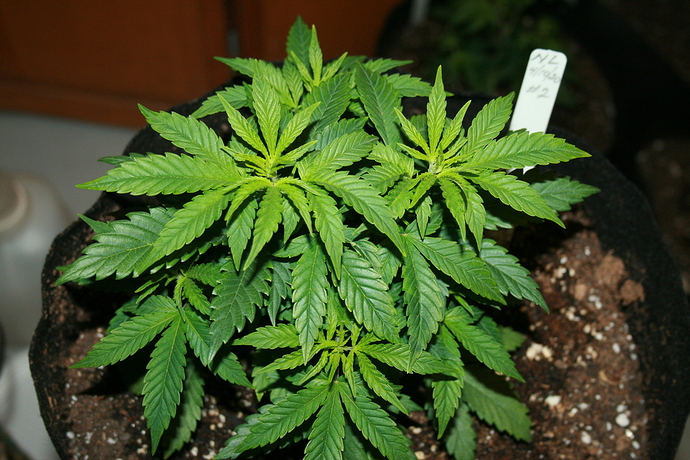 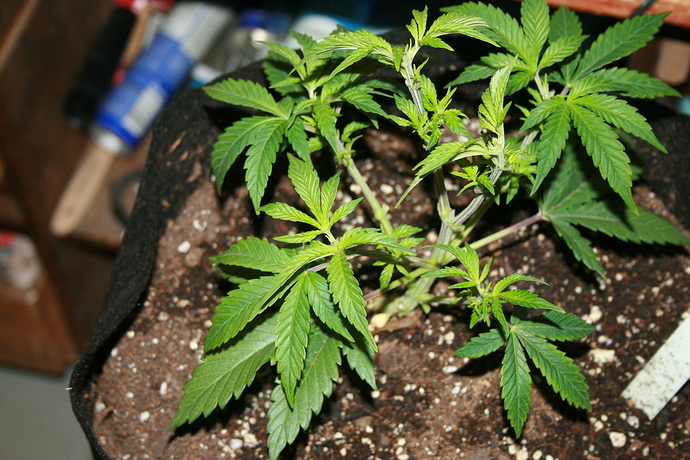 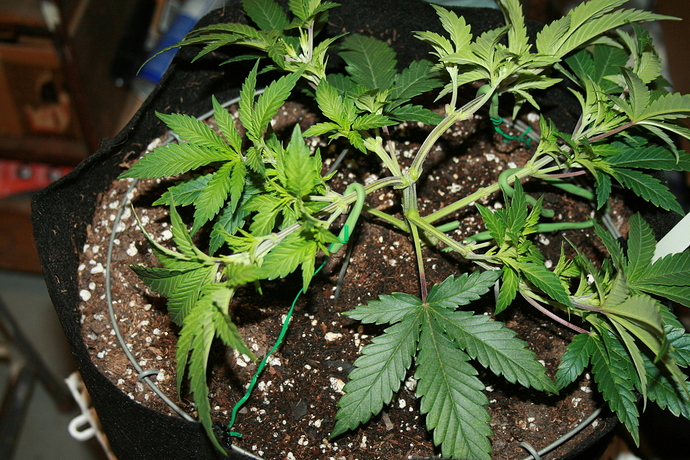 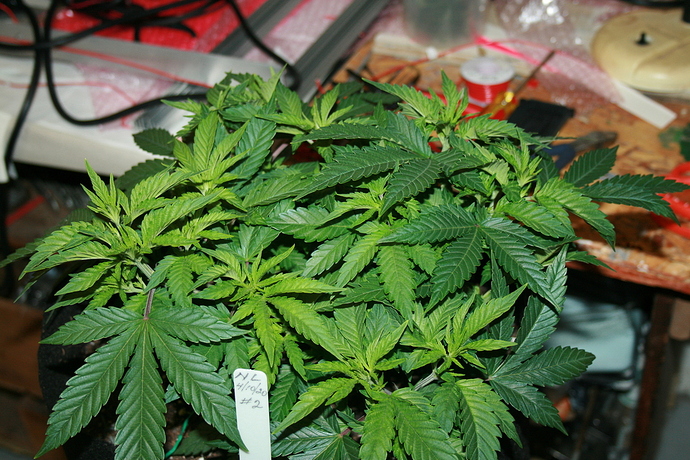 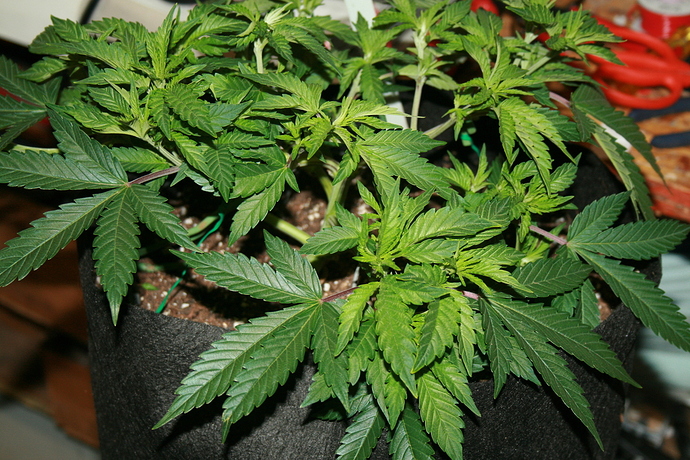 IMG_00661224×816 729 KB
I was not afraid to take upper fan leaves because there were plenty of large ones left. If you saw her today, after only 2 days, you wouldn’t know I touched her. One of the reasons for the significant growth of the lower branches is all of the node site were topped. The growth hormones that would have gone to one flower / colas is redirected to all of the bud sites below the cut.
Hope this helps. Ps this is my first photo grow. Just autos up to this point but I did play around w/ topping and LST. Just not to this extent.
1 Like
dbrn32 May 28, 2020, 3:49pm #12

How big are the plants? Small plants with a handful of leaves vegging wouldn’t really make a lot of sense to be removing fan leaves from. If you have a well established plant, taking a couple leaves isn’t going to hurt it.

if the plant has lots of leaves on it just pinch them off and be done with it. It wont hurt the plant. I pluck huge older fan leaves off every other day on bigger plants! Deer have eaten half a plant right off abd they still did their thing! A couple fan leaves on a mature plant wont hurt anything. However, if you are nowhere near flowering, large fan leaves have a lot of surface area, plants are like solar panels. They process a lot of energy to make food for the plant. So its your call?

The plants are very young, but they are so big and dense already. The lower giant fan leaves were making it difficult to water properly and the upper two were completely blocking the light from the new growth. I had already removed the single bladed leaves, as they suffered from a terrible calcium deficiency because of ph lockout. I let them be for a while, but they were getting thin and crispy, so I took them off. The plants didn’t even notice.

Leave them in the plant then I thought these were mature. The fan leaves are what is making power for that plant. The branches will grow dont worry about that. Maybe shoot a picture from the side in natural light and it would tell the story better. 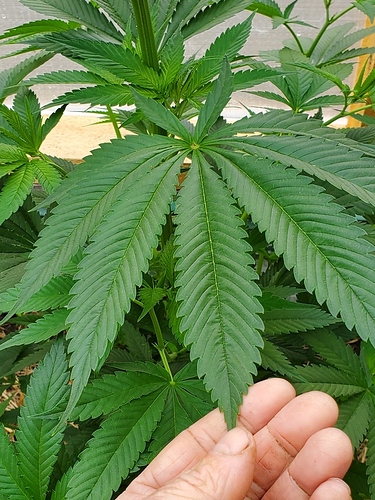 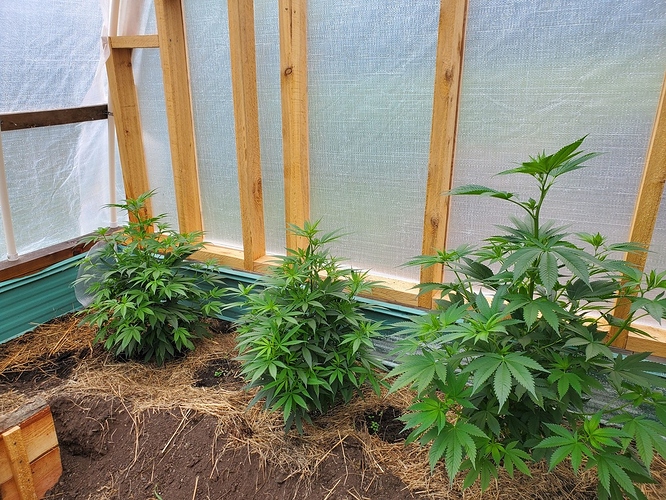 @Cannabian I’m out of likes, but I love your’ posts. I wish I could give you the photos you ask for, but alas; it’s too late. I did what I thought was best by removing the the two leaves in question. I just took this post surgery photo. The leaves that I trimmed were as large as the one pictured with my hand under it, (size xxl glove) if that helps you imagine the kind of shade they were throwing. 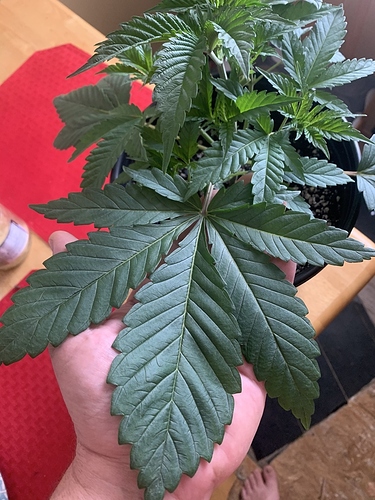 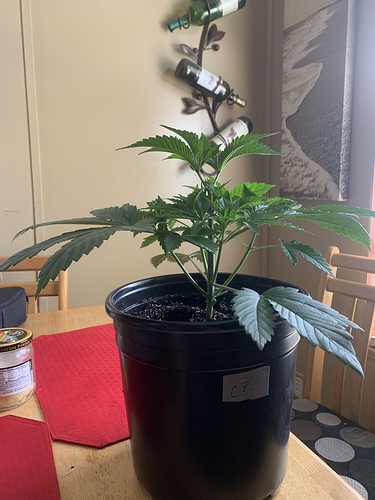 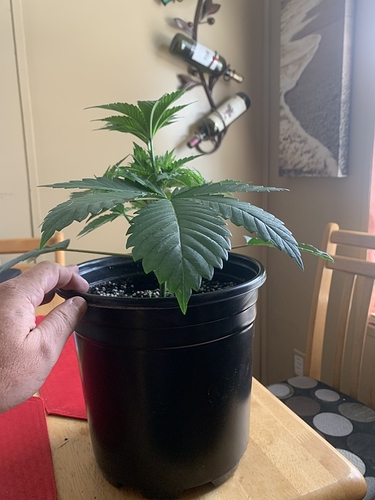 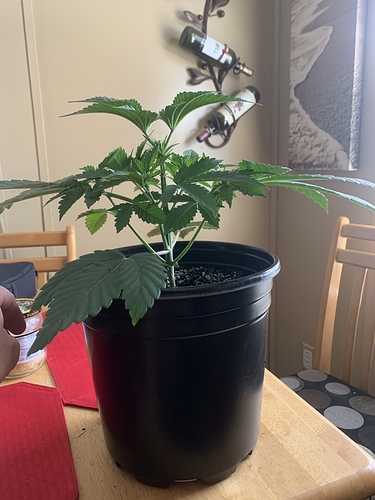 They are only 17 days from sprouting today!

Im sure the plant will be fine, but honestly, I would leave those, as you can see the branches are growing anyway right? The big leaves are converting the food for the plant and aiding in photosynthesis for the rest of the plant. Eventually, those leaves will be at the bottom and be shaded out, its then that the work they once did is not being done as efficiently anymore. At that point its best to remove them to improve ventilation and put the focus elsewhere for new growth. So in the future along the mainstem of those branches more of those large leaves will grow. Only remove those that are in the shaded part of the plant… here let me show you 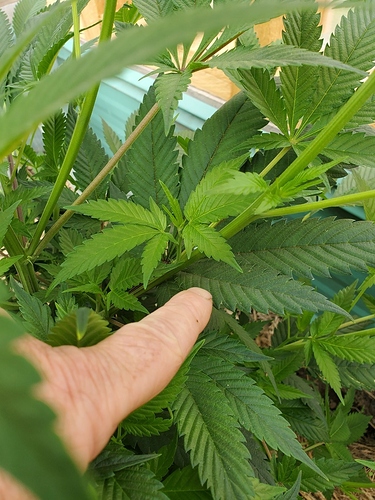 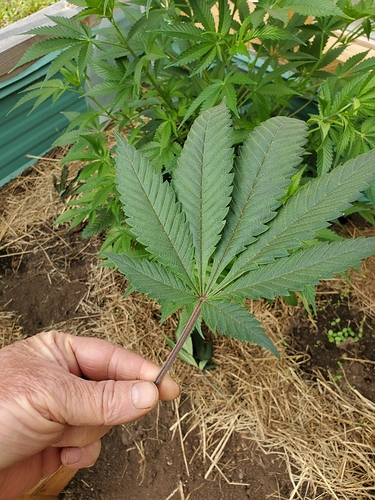 Excellent! Thank you so much for the help and education. I’m sure they will recover just fine, but I won’t make this mistake again. I’m over loving them.