Mixed my nutrients using roots organic and i am using 3 cutting edge solutions .bullet proof SI, mag amp amd plant amp.and after mixing it dropd the PH DOWN to around in the 4 i hoping it will go up in the moring
@bob31

I hope this helps

The main thing to remember is that maintaining the right pH at the cannabis roots helps the plant absorb nutrients. Why is that?

Nutrients take different forms (on a chemical level) depending on the pH around them. Some forms are easier for the roots to absorb than others. When the pH is too high or too low, the plant can show signs of a nutrient deficiency even when the nutrients are physically there at the roots.

With pH, you’re helping plants get access to all the nutrients all the time. While pH is important for all grows, it is most important for growers using cannabis nutrients. The way that liquid nutrients are formulated, they are highly available to plant roots, but only in the right pH range.

As a result of the pH being too high or too low, cannabis plants may start showing signs of nutrient deficiencies even if the nutrients are available in the growing medium.

Once you get the hang of maintaining the pH, it’s a breeze and will take you only seconds. And after you have your grow dialed in, you may not even need to check pH as often because you know what to expect.

So do i need to adjust it @garrigan62

So, a target pH range of 6.2-6.3 is what you want to adjust your nutrient solution to for application in a non-circulating system without a reservoir. That is to say, you mix your nutrients into your water just before watering.

But back to my first comment about the change over time in soil-less mediums. When growing in soil/soil-less mediums the most important thing is knowing whether your pH is rising or falling. Most of the time, especially with heavy feeding associated with high growth rates, pH in the root-zone will slowly fall over time. This is mitigated by consistent pH adjustments by the grower.

Either buy a Soil pH meter, or measure your runoff and measure and record the starting pH. Runoff does not accurately represent the pH in the root zone or rhizospere. But it can help you to identify if there is a change in either direction.

You said you wher in soil less @garrigan62 gave you the info on whee to ph your nutes mix or water to its
5.5-6 tho
Garrison is a great grow mentor and wouldn’t steer you wrong @Wolfmankush

Right on thanks for all the help from all of you

Would it be good to just “flush” it with the proper pH to get it going?

To me flushing dose more damage than good and that’s just my personal view on flushing.

I wasn’t talking about before harvest. Talking about doing a “proper pH water replacement”

Well ya, if your doing a water replacement you’ll want your ph in order.

I think we are agreeing. I was just talking about him watering with the proper (or a tad high) pH, but instead of just watering until a little comes out the bottom, giving it a good soaking and letting it run through a little.

here are two pic’s that are very similar to yours that and i strongly believe that your plants have a: 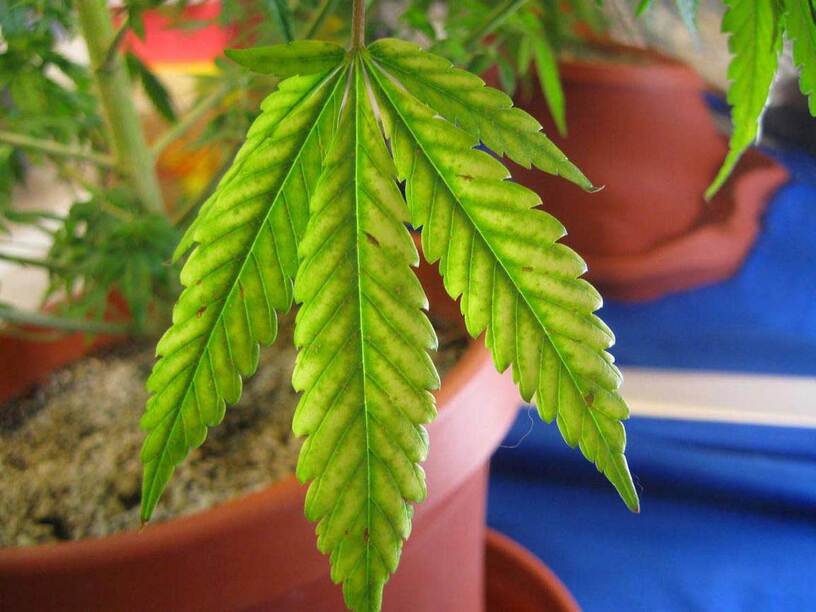 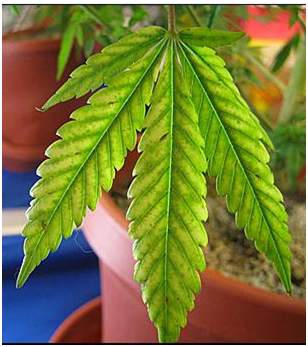 Magnesium helps supports healthy veins while keeping a healthy leaf production and its structure. Magnesium is significant for chlorophyll-production and enzyme break downs. Magnesium which must be present in relatively large quantities for the plant to survive, but yet not to much to where it will cause the plant to show a toxicity.

Magnesium is one of the easiest deficiencies to tell… the green veins along with the yellowness of the entire surrounding leave is a dead giveaway, but sometimes that’s not always the case here. In case you have one of those where it doesn’t show the green veins, sometimes leaf tips and edges may discolor and curl upward. The growing tips can turn lime green when the deficiency progresses to the top of the plant. The edges will feel like dry and crispy and usually affects the lower leaves in younger plants, then will affect the middle to upper half when it gets older, but It can also happen on older leaves as well. The deficiency will start at the tip then will take over the entire outer left and right sides of the leaves. The inner part will be yellow and or brownish in color, followed by leaves falling without withering. The tips can also twist and turn as well as curving upwards as if you curl your tongues.

Excessive levels of magnesium in your plants will exhibit a buildup of toxic salts that will kill the leaves and lock out other nutrients like Calcium (Ca). Mg can get locked out by having too much Calcium, Chlorine or ammonium in your soil/water.
One of the worst problems a person can have is a magnesium def caused by a ph lockout. By giving it more magnesium to cure the problem when you are thinking you are doing good, but actually you are doing more harm then good. When the plants can’t take in a nutrient because of the ph being off for that element, the plant will not absorb it but it will be in the soil… therefore causing a buildup. A buildup will be noticed by the outer parts of the plant becoming whitish and or a yellowish color. The tips and part way in on the inner leaves will die and feel like glass. Parts affected by Magnesium deficiency are: space between the veins (Interveinal) of older leaves; may begin around interior perimeter of leaf.

Problems with Magnesium being locked out by PH troubles

Magnesium gets locked out of soil growing at ph levels of 2.0-6.4
Magnesium is absorbed best in soil at a ph level of 6.5-9.1 . (Wouldn’t recommend having a ph of over 7.0 in soil) anything out of the ranges listed will contribute to a Magnesium deficiency.
Hydro and Soil less Mediums

Solution to fixing a Magnesium deficiency
Any Chemical/Organic nutrients that have Magnesium in them will fix a Magnesium deficiency. (Only mixing at ½ strength when using chemical nutrients or it will cause nutrient burn!)
Other nutrients that have magnesium in them are: Epsom salts, which is fast absorption. Dolomite lime and or garden lime (same thing just called different) which is slow absorption. Sulfate of Potash, Magnesia which is medium absorption. Worm Castings, which is slow absorption. Crabshell which is slow absorption. Earth Juice Mircoblast, which is fast acting. (a must buy!! Has lots of 2ndary nutrients).
Now if you added to much chemical nutrients and or organics,( which is hard to burn your plants when using organics) You need to Flush the soil with plain water. You need to use 2 times as much water as the size of the pot, for example: If you have a 5 gallon pot and need to flush it, you need to use 10 gallons of water to rinse out the soil good enough to get rid of excessive nutrients.

I k know you are and that also is in there . What i posted both soil and soil-less