I need some fan advice. I ordered a 5’x5’x80” (tall) tent and a HLG 600H 3000k V2 Samsung QB light kit. Now I need to get a fan setup to control temperature and odor and circulate air. The room the tent is going into is unfinished so I have access to the HVAC ducting for the building. It’s extremely well insulated and the climate control keeps the ambient temperature in the room between 71°F/21.5C and 76°F/24.5C year-round. There are no windows or major sources of fresh air but I think there’s enough air leakage that fresh air isn’t an issue. If it becomes one, I can easily run a duct to another room or even attach a duct from the tent to one of the HVAC ductworks to draw air from the building (when the HVAC isn’t running) or from the HVAC system, when it’s on.

I’m thinking that the ambient air temp being what it is, and the fact that I’m running LED’s will mean that heat won’t be much of a problem; and that all I really need is a proper exhaust fan and a good filter. Noise is a real concern so I’m looking at a Hyper Fan Stealth or a Vortex S series in-line fan with insulated ducting and a carbon filter. What do y’all think? As a bonus, both of these fans pull very low amounts of electricity; particularly when run at slower speeds using the speed controllers. Both of these fans are supposed to be VERY quiet and they have really long, 10-year warranties!

My tent only has 175cu/ft feet of volume so a 6” fan will be plenty. But my research has found some folks recommending larger fans running at 1/2 speed/power for a much quieter system. For a few dollars more I could go with an 8” fan and run it at about 30%-40% and have MORE than enough air exchange for that 175cu/ft tent. Is this right or am I incorrect? What’s your advice on this aspect?

Filters: are they pretty much the same when you’re talking about a carbon filter and a pre-filter; OR, are there really big differences between them? For a tent the size of mine, do I need to worry about a high end filter or will just about any carbon filter do the job? I plan on using some Ona in the outer room. I’ve seen the Phresh 400 carbon filters on the lower end and the Airbox 1 and Airbox 2 on the upper end. What would y’all recommend?

Hey @DTOM420! From the sound of the setup, I think the 6" fan would do fine, but the 8" would probably do a more efficient job, and give you more flexibility with climate control. The ambient air in the room should be sufficient, but drawing from another, cooler room, or directly off the HVAC would be even more flexibility. Another inline fan on the intake side would even be an option. Try to give yourself as many variants as possible, since your tent won’t always be just seedlings, or just mature plants, necessarily. A space that big could even be divided. So, the environmental demands at different stages of the plants’ lives will affect how much air flow, at what temperature, and from where, you want.

I’m not certain on those specific boards (they are very popular here), but LEDs do generate some heat. My converted freezer runs in the high 70s to low 80s, despite the room it’s in being 72ish, all the time, and an exhaust fan rated at WAY more cfm than necessary. Granted, my LEDs are nowhere near the quality of those. But don’t assume heat just won’t be an issue…it might not be, but it’s better to be prepared, in case it is.

I can only speak for the one Can-Lite 4x15" carbon filter I own. In most cases, even the worst is going to do a much better job than Ona alone. I use both, in different spaces. The one jar of Ona I have in my closet is kind of a joke compared to the carbon filter. Err on the side of caution if stealth is of the essence.

Welcome to the forum, if I haven’t said that before!

You should be fine with a six inch exhaust fan
Your ambient temps are good to help maintain the tent tent I suggest you get a intake fan. As well this will ensure your replacing the warm air that exhaust is pulling out with the cool air in front the room
You’ll definitely have heat generation off the lights
Any other questions you have you can tag me @DTOM420 as mentioned im a hvac mechanic

Thanks for the tag @Sirsmokes

You should be fine with a six inch exhaust fan
Your ambient temps are good to help maintain the tent tent I suggest you get a intake fan. As well this will ensure your replacing the warm air that exhaust is pulling out with the cool air in front the room
You’ll definitely have heat generation off the lights
Any other questions you have you can tag me @DTOM420 as mentioned im a hvac mechanic

Thanks for the reply and the offer to help! So, the negative pressure from the exhaust fan won’t draw enough air through the lower vents? If I run a 6” exhaust, what size I take fan would I need?

Are the 2 fans I mentioned good choices to be quiet or is there something else I should be looking at? Noise is a real concern. So, I’m trying to find the quietest setup I can without spending a ridiculous amount of money.

Again, thanks for your input!

It will draw some air in and your welcome to try with out a intake fan
i perfer a having what we call a makeup fan in the industry ( intake fan ). It ensures tou have plenty of fresh air coming back
If you decide to run one size it half to 3/4 of your exhaust meaning if your exhaust pulls 400 cfm you want min to max 200-300 cfm on your intake that will ensure you remain in a negative pressure and replace enough fresh air
Also when trying to control temp and humidity in tent its best to adjust the room yemp and humidity tent is located in And that will keep tent in comfort zone 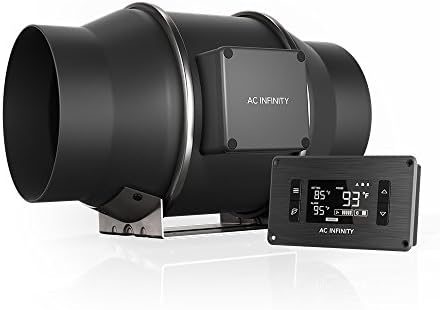 @Countryboyjvd1971 That fan is a whole lot cheaper than the fans I was asking about in my original post. Those are about $242 on Amazon. “Hyper Fan Stealth 8” but they’re supposed to be the quietest on the market. They make a 6” version that does 314cfm but I thought about going bigger so I could run it at 30%-40% and have it even quieter.

I get your point about the intake fan and that’s what I’ll do.