Hey everyone! This is my first time growing, and wanted to share the journey with everyone!

I’m a bit late in starting this, but hey, better late than never. I’ll share my mistakes and
things I’ve learned along the way.

On July 21st, my little girl first sprouted up through the Jiffy Pellet: 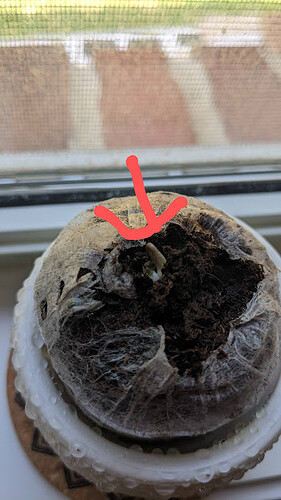 I had initially purchased a grow light that I thought would work, until it turned out that the Wattage was in very small text that I overlooked and was only 10W. My wife is okay with me growing as long as I don’t spend much money. So, I found another light that was fairly inexpensive (Samphon 100W) that would work for me. My plan is just to grow one plant at a time, and it’s gonna be in a rather small closet (19" depth).

By the next day my light had come in, and I moved my little seedling inside and got her setup: 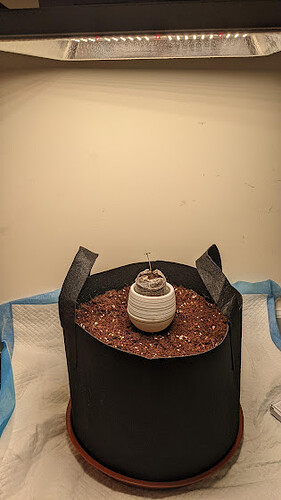 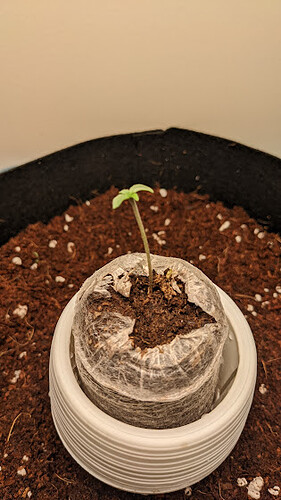 By July 25th she was started to resemble an actual plant: 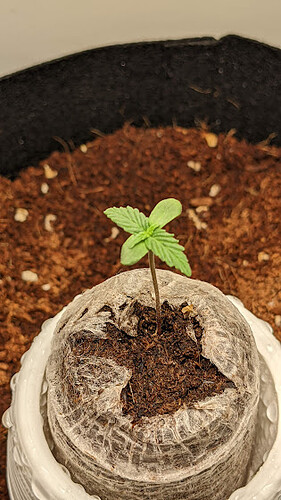 I checked the roots a couple days later (I was read to go a week in the Jiffy Pellets) and saw that the roots were showing at the bottom. So, moved her to her home on July 28th: 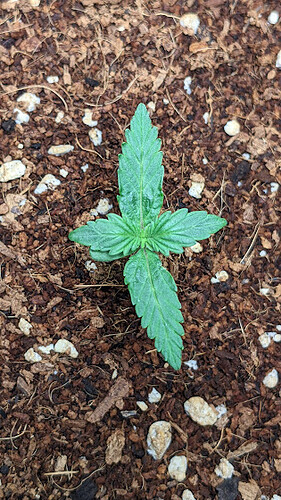 Fast forward to Aug 3rd and she seems to be happy and healthy: 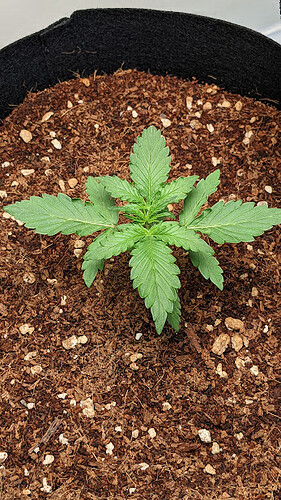 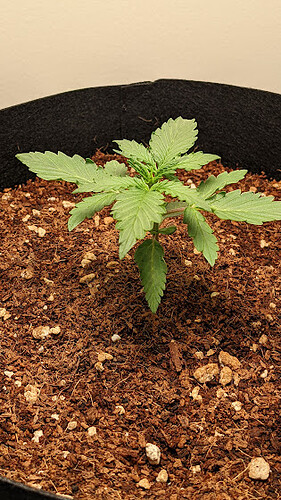 August 6th and she’s growing really well and I bumped by DLI up from 26 to 31: 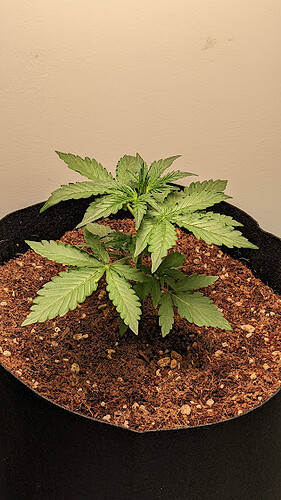 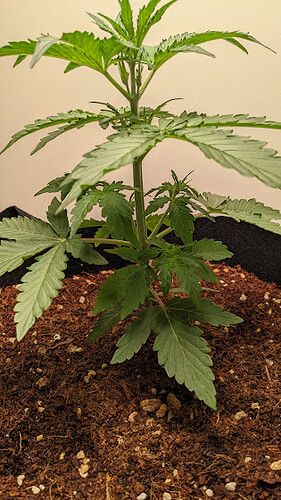 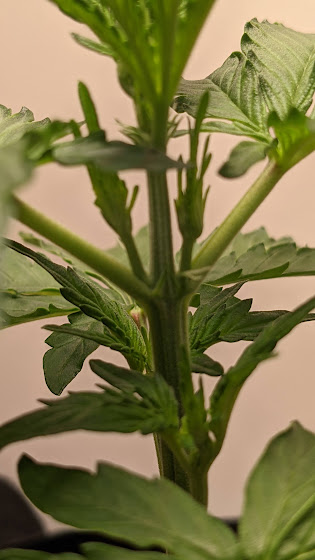 August 10th:
So, at this point I’m thinking about LST. I had made a post and it was recommended that I top her. So, I was planning on doing so the very next morning and began to read and saw several articles saying to never top an Auto. The arguments I read against topping Autos was due to their set grow schedule and that it could stunt it. So, no topping on this first one. 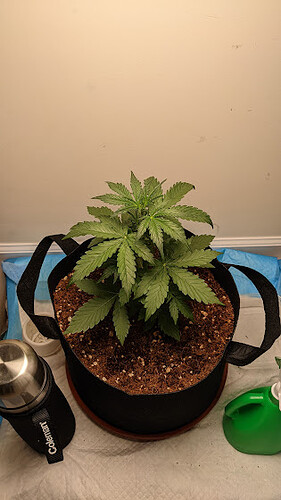 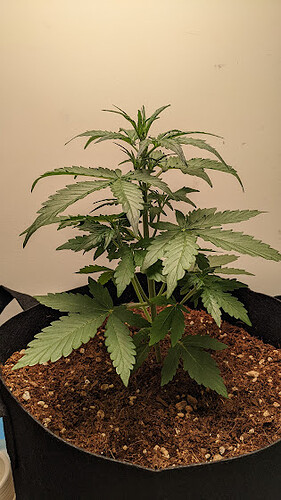 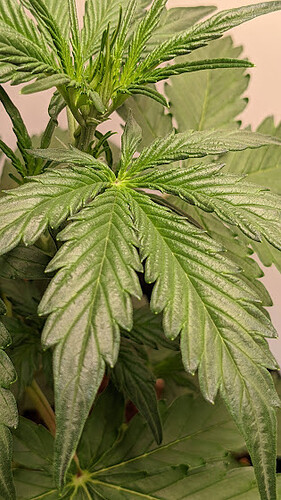 In my additional reading, I learned what overwatering truly meant. I had been checking every morning and sticking my finger one knuckle deep in the soil to see if I could feel moisture and was watering her every morning. Then I learned that’s not at all what I should have been doing. Instead, give her a good bit of water (at least a liter) because it being a fabric bag it’ll drain out - just don’t do that on a daily basis. I did learn only on to only water around the outside to promote root growth, and that the middle roots are primarily wanting oxygen. So, I was doing that halfway right.

Aug 11th:
I decided to give a shot at LST this time, and next grow I’ll try topping and see what difference that makes. I understand the goal with LST is to try to create an even canopy, so I did a couple tie downs: 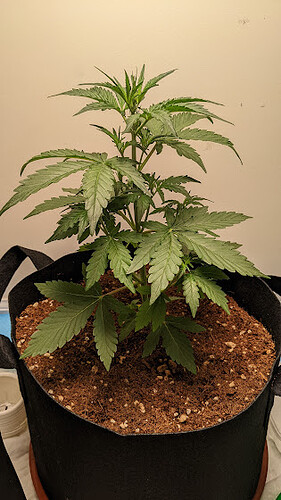 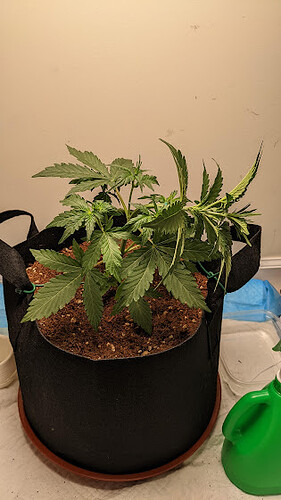 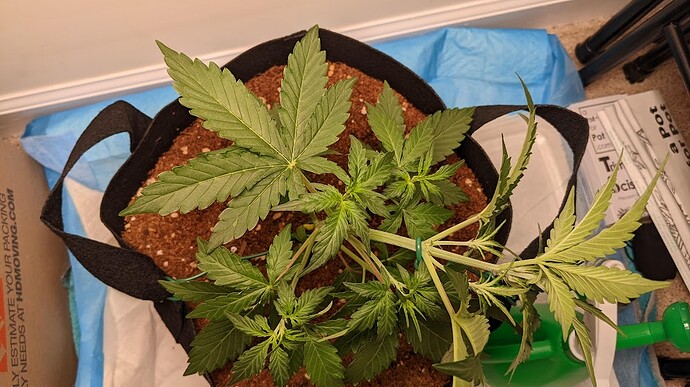 Hopefully I didn’t screw up with the LST on her. If I did, please do let me know and I’ll go ahead and untie her.

Does anyone have any advice for my LST effort?

Does anyone have any advice for my LST effort?

Was I too aggressive with that bend of the main?

Was I too aggressive with that bend of the main?

You did good! I would recommend some LST clips for later on, they’re pretty useful

Thanks man. Your journal has been awesome. I’ve found some on eBay that I’m gonna pull the trigger on. I know with this first grow I’m gonna make mistakes and it’s a learning experience.

Yeah honestly my journal is just me asking beginner questions because I’m trying to grasp the whole learning everything and being able to function on my own and then help others. Learning about VPD etc has been interesting, the hard part was controlling it, but I finally got it down

Also I would rec some bulldog clips, they’re prettty good for LST

I learned what over watering actually means from your journal - I was just giving it a little water at a time. My wife isn’t thrilled about me growing, so I’m having to keep my setup as simple as possible. Would love to snag the tent you got, but that was a stern “no” when I mentioned it to my wife. Hahaha 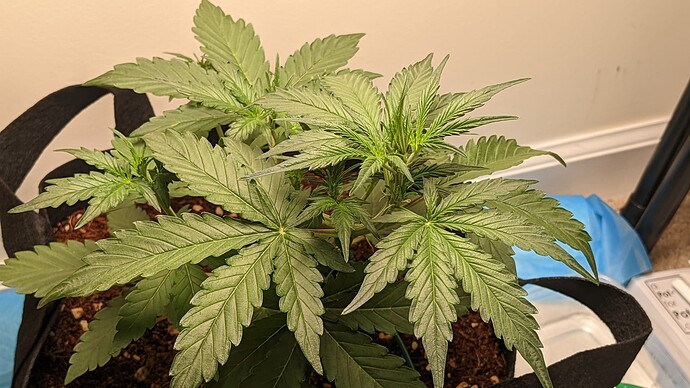 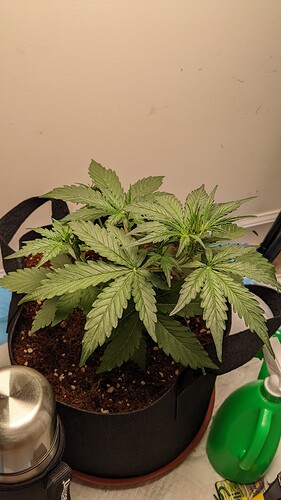 Wife not with it yet

don’t worry she’ll come around, just go to mephisto genetics and show her the “pretty” strains

I am, yep. I’ve had GSC and really liked that strain, so figured I’d go that route to start off with…

I’m growing that next as well

Oh sweet! Hopefully this trip I’m on will help out. I snagged a 5 pack of these, so it’ll be a minute before I grab another pack. Kinda wish I did a variety.

Dude!! Ethos has variety packs, and mephisto has dope strains they sell 1 seeds of. I can show you some if you’d like, I just ordered from mephisto

Oh hell yeah. I just tried some LSD Auto a buddy of mine got from ILGM. It sneaks up on ya.