I got my first set of seeds on the fourth of this month, they were in the mailbox about 6 in the evening. Being excited about the entire project, I planted them right away - two to start with, perhaps more in a month or so…

When I looked in the planters I set them up with three days later around the same time - I already had a sprout coming up!

Had to have been right at 36 hours exactly, and that points to some excellent seed viability and quality, the #2 plant sprouted within 5 or 6 hours of the first, so this is one hella indication of the health and quality I can expect from this point out.

~ I am indeed very impressed

ON EDIT: Forgot to mention, they are Jack Herer Feminized

One of them had a bad reaction to the soil it was in - I used more than one kind of soil mix to see how they responded. There was mulch mixed into one or two of them, and I found a big chunk of wood in one of the planters blocking the main tap root of one of the plants.

The particular soil came from LOWES and is brand labeled STA-GREEN. It is actually intended to be mixed 50/50 with existing soil - but I didn’t read the bag until after I saw what it did. 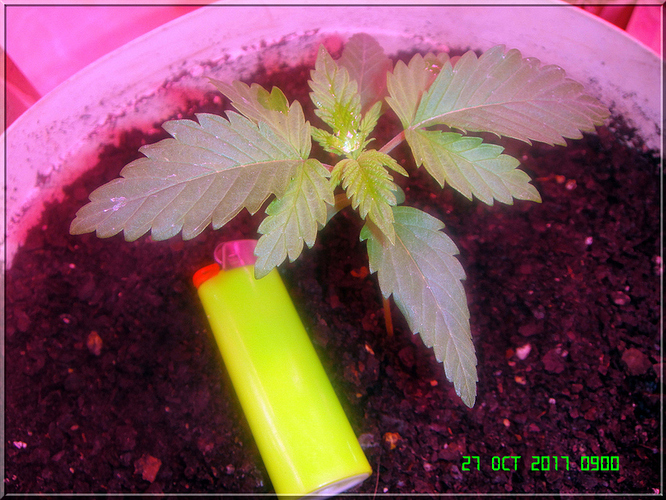 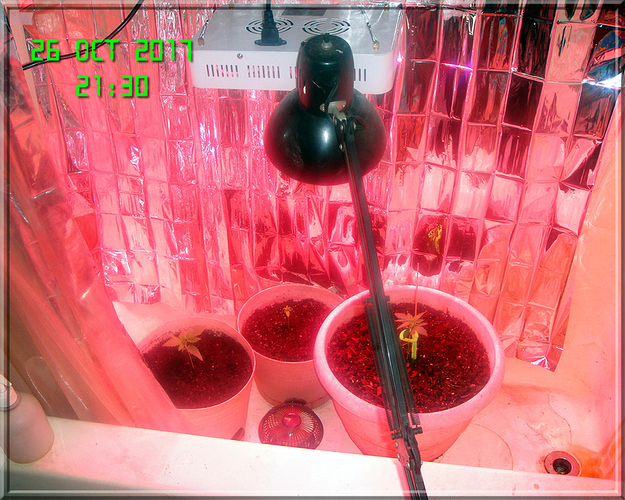 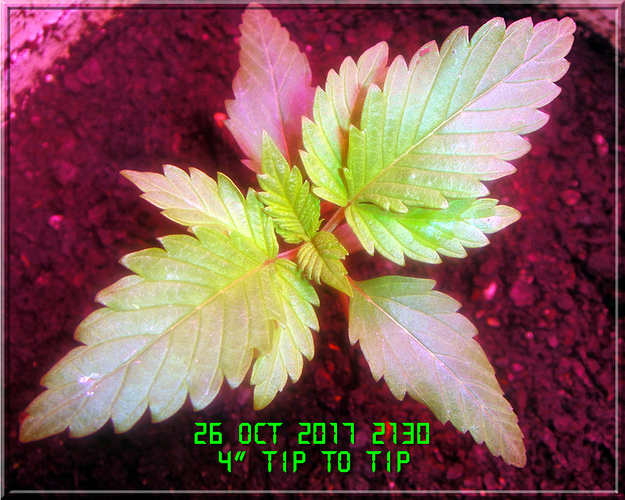 ~The middle picture, that small plant in the center was just on the 25th(2 days ago) moved to that pot with the soil I mentioned above. I’m waiting to see if it helps it.The plant on the LEFT in that picture was in that stuff to begin with - but was planted TWO FULL DAYS AFTER the other two…

So yeah, this is something I am watching with huge interest.

BTW: the middle pic is of the tub in a bathroom I do not use. It dawned on me that it was the IDEAL indoor grow spot, where the tell-tale color of the grow light would be completely hidden from view. It’s in the center of my single story house, is vented to the attic, and all it took to hang lights and fans was a single extra shower curtain rod (!!!) available from any home despot or similar hardware and lumber outlet

How cool is that?

PS: It totally fascinates me how wide these leaves are on the Jack Herer strain…

Wow @FrikkinFrank what a great sight to see!

I’m eventually going to move all the plants to that soil but in 5 gallon buckets with drain holes in the sides about one inch (2 - 3 cm’s ?) up from the bottom. The bottom inch of the buckets will have either hardwood bark mulch or peat moss in it for drainage, but the one inch spacing should create a reserve well in the very bottom to guard against drying out. It’s a trick I learned from regular gardening…

I dunno how tall they will get, but I’m thinking of a way to hang the lights and fans outside the tub enclosure if they get super huge. I can put up a pair of towel hooks on opposite walls that will enable me to hang the curtain rod for the lights and fans inline with the length of the tub, but will be explainable later after the buds are done and gone. The plants can dry hanging upside down in the tub, the lights, fans, and rod be put away leaving only a set of towel holders or something that helps keep the end of the rod when it is in place from sliding down the walls.

Simple, adaptable, and portable. Best of all nothing has to be invented, it can all be bought at any hardware store or even WAL-frikkin-MART !!! 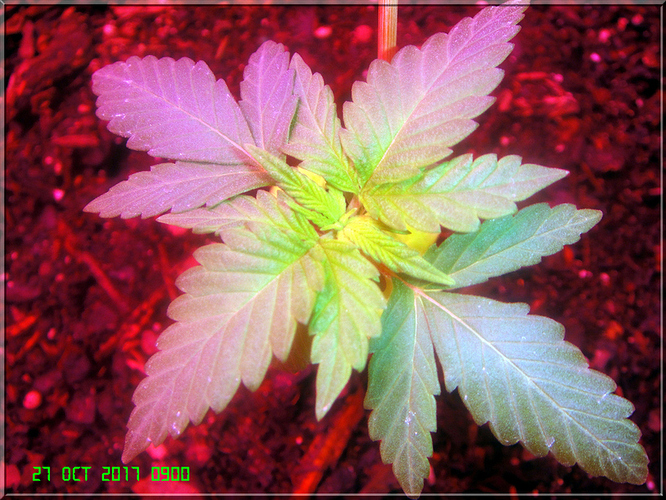 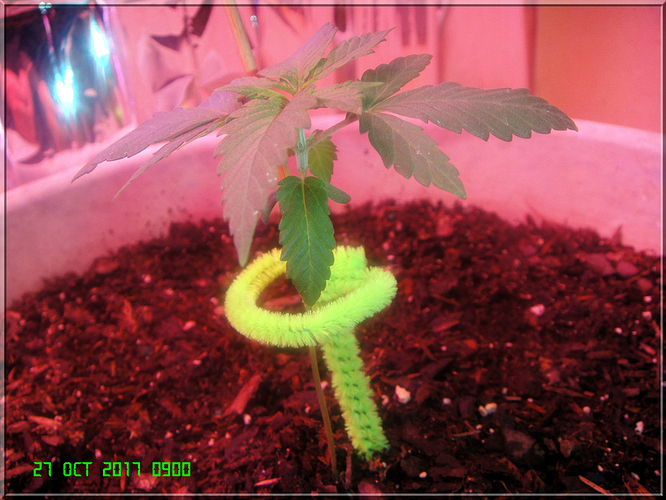 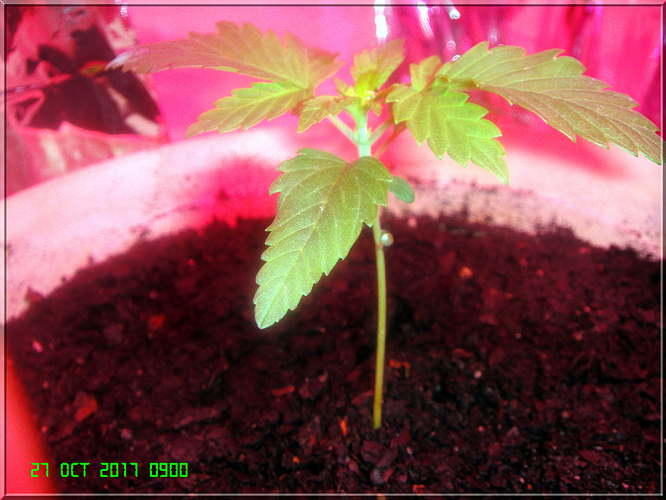 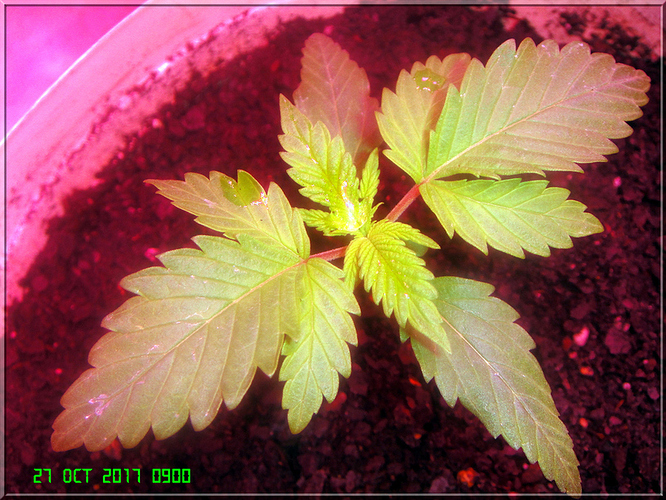 27oct0170900c816×612 437 KB
TIP of the DAY
Above you can see a simple safety support that is made by winding a long decorative pipe-cleaner type thing around a “SHISH KEBAB” skewer. Both of those things can be found at random craft or other stores cheaply…

PS: One thing I love about the way pictures work on this forum is that there is NO WAY IN HELL I wanted to put pictures of “HERB” up at a host website like Photofukkit or somewhere - too much chance of being reported and traced back to yours truly