I have a gold leaf Fem growing in a fabric pot… its nicely in flower now…
How do you deal with the falling temps at night? How low is too low?
We have had two nights in the 40s. I stuck it in my greenhouse. Looks like it needs Christmas lights. 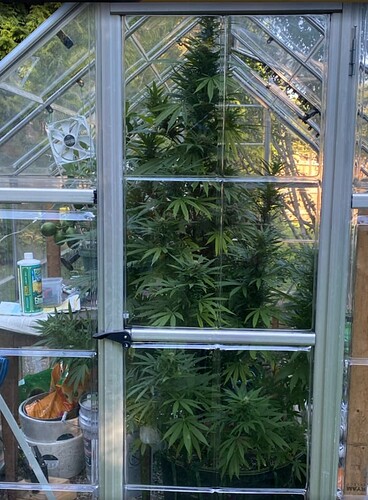 In a greenhouse you should be good for a while

You were wise to use a container instead of in the ground: if you get cold nights down into the 30’s I’d bring it inside. Same if you get precipitation during late flower which can ruin your whole crop to bud rot.

. You have a very beautiful lady there. Happy Growing

I wore that girl… full in the face when getting her into the greenhouse. She is a tad large and happy. Really hard to complain about that.

We are back up to 58 tonight and I don’t hit the 40s (in theory) for 2 more weeks. I have ae empty tent but she might be a bit tall… I might not have room for the light… I would have to measure. I was holding off growing in the tent until this girl was done. Generally I wouldn’t want to take an outside plant and put her inside due to bugs. But if nothing else is in there… does it matter?
My biggest battle with the autos I had were aphids and little green worms. I was going to spray her soon with some BT and later some crop defender. Maybe toss some DE on the dirt for other pests. I am thinking she is not going to be done/ready until well into October. We could see freezing temps then!

Would it be horrible if I moved her in the tent before then?

ALSO… work is talking about me going to the UK for 10+ days in mid October. I can’t ask my wife to bring it in and out every day. That seems to be asking too much (on top of everything else). Know what I mean? lol Yikes! I keep hoping that is postponed.

I feel your pain DogDays. I’m in the same boat. Also growing in Massachusetts. I move my plants undercover when there is any chance of rain (like today). I have 8 plants in 15 gallon pots and it becomes a chore. I currently have 5 on my front porch and 3 in my shed. Also about 3 weeks from harvest.
Bob

Thankfully I just have the one. Before I head down to work I will slide her back into the greenhouse.
8 plants! Yeah, that would be a chore.