I have been researching the Mars Hydro FC-E3000 for a 3x3 tent. I see a lot of posts with plants in the veg or early flower stage but not many in full flower. How does this light do for flowering?

The Mars literature says its good for 3x3 personal grow coverage or 2.5 x 2.5 commercial grow. What’s the difference? Does it really not cover 3x3? What makes a larger coverage (obviously less performance) acceptable for personal but not commercial grows?

I can spend more money on a light but looking at the specs for the FC-E3000, the competition doesn’t look a lot better. Can someone help me understand why others are better besides just saying Samsung is better. If the specs are the same, is there something extraordinary that Samsung does better? What are you successfully using in a 3x3?

The FC 3000 uses Samsung diodes. It will do a good job vegging in a 3x3 for sure. Even though the manufacturer says it’ll flower a 2.5x2.5 it should do okay flowering 3x3. As a rule of thumb you need a minimum of 30 watts of LED per square foot to get a decent yield. You’d be at 33.3 watts per square foot with this light in a 3x3. I use around 43 watts per square foot right now. Others use 50 wats or more.

I always recommend HLG to anyone who asks about lights. I use a 350R in a 2x4 tent. Just pulled 15.08 oz dried from four zkittlez autos. It was my first indoor grow. I’m not an expert by any means, but you never hear anyone complain about their HLG. Never. The results always do the talking.

The FC3000 will definitely work in a 3x3, but take a look at HLG or ChiLLed if you can spend extra $$. As the single most important piece of equipment you’ll buy it’s worth getting the best one you can to start with.

Thank you. I will look at the light.

personally I would look for a light that will legitimately cover a 3x3 during flower. Take a look at the 12" PPFD map. Its sides are down to only 400. I fill up my 3x3 and I would not want my side and corners coming up short.
If I was committed to Mars I would be more interested in the FC-4800. Many run two lights in their 3x3 to obtain the desired coverge.

I am not necessarily committed to Mars if you have any suggestions. I do see what you mean about edges.

I have two 240W Green Beams light in my 3x3. I like the versatility of being able to use the lamps at different heights, as I had all kinds of different sizes in my last grow. Right now, I have one plant so they are hanging together as if they were one 480.

I’ve purchased the fce4800 for a 3x3 . Fits perfectly cover’s every inches. 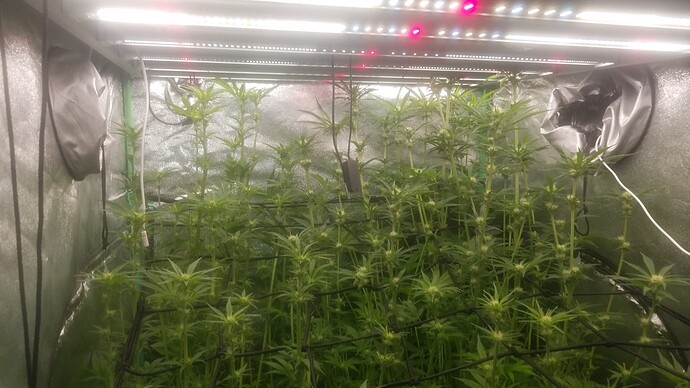 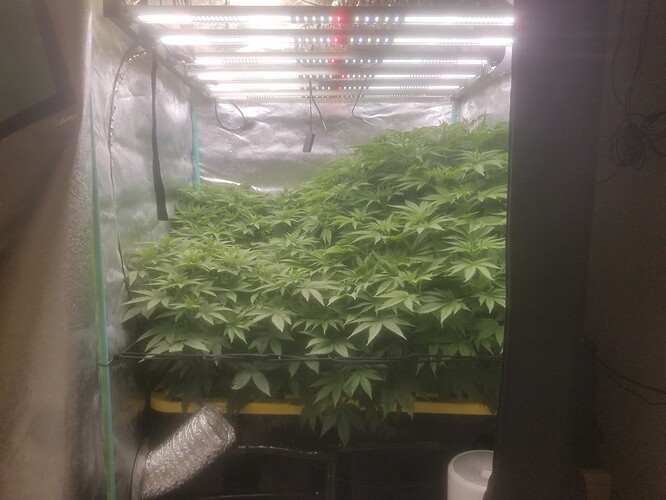 I have an older Spider Farmer SF-2000. It gets really hot. I was thinking of getting a second and putting them together vs the 3000 but am worried about the heat. Do you have your drivers inside the tent and do you think having two (drivers) raises the temp significantly vs just one?

My lights came with long extension cords so the drivers could be placed outside the tent. I have them on top sitting on a 2x4. I have my lights set to 12/12 currently, but the lights are on from 4 PM to 4 AM. Highest the heat inside has been is 82 degrees. My girl is “asleep” now, sitting at 73 degrees and 47% RH.

After wasting money on lights I went and got a hlg 600 for my 3x3. Based on this forums recommendation (brand not size…) now i will say its waaayyy too much for a 3x3 runs at maybe 50% and gives a dli of 49.3 on 20/4 schedule. Was so impressed by the hlg light i bought another for my 2.7² tent. That ones only a 300 but only because the 600 wouldnt fit…
Long story short dont be like me and waste money on lights just buy a good one right off the bat

HLG is king all around with the Diablo boards (QB648 I think) (except in design, but I just have beef with their mounting system generally - the lights themselves are outstanding)

Green Beams is king of affordability if you want a good light for cheap. They are comparable to HLG’s qb288 models.

KingBrite is king of customizable spectrums for a decent price and a loooong wait from China. They are also most directly adjacent to HLG QB288s with more bells and whistles.

ChilLED Tech is king for cool temps and solid lighting.

ACInfinity (lights only) unfortunately lives in the land of “don’t bother” alongside Spider Farmer, Mars Hydro, Vivosun, Bloomspect, Viparspectra, and countless others.

100% with you on the mounting, or should i say lack thereof. Was thinking of putting eye bolts on the holes the carabiner clips into. But im lazy and have not.