I’m using a mix of coco core and mostly used FF HF soil and ILGM nutrients with FFOcean soil and a supersoil. Water is adjusted to 5-5.5 to cospeciate for the soil. Is that correct or should I lower the soil PH and how?

I’m using a mix of coco core and mostly used FF HF soil and ILGM nutrients with FFOcean soil and a supersoil.

This statement is vedy dicficult to understand. Says your using a mix of coco and used HF soil. But then you say your using OF and super soil.

I think they’re saying they’re used to OF soil and now growing in coco.

Or they’re mixing coco and a mix of used OF and HP. Can you clean this up @Ace_Trauknot

I use the Coco / used ff hf top layer and used ff oceans mixed with super soil bottom 1/3. It just seems to be a waste to throw it out until after 1-2 grows. I may be wrong but doesn’t seem to make a big difference.

It’s a difficult task growing with multiple mediums. Soil has ph buffers in it, as does super soil. Coco does not. You have mediums fighting each other.

Right, that’s why I need to find something to bring it down. Any ideas?

If you want organic you can pick up citric acid crystals at your grocery store. If not you can just get some general hydroponic ph down.

Once humus based mediums are added to coco it is no longer a hydro medium. It is considered soil. Using soil, soluble nutrient solution and water (inputs) would be at 6.5± ph.
The exception to this strict soil ph regime would be a true living soil. In this case ph is more flexible but still generally in the 7± ph range. 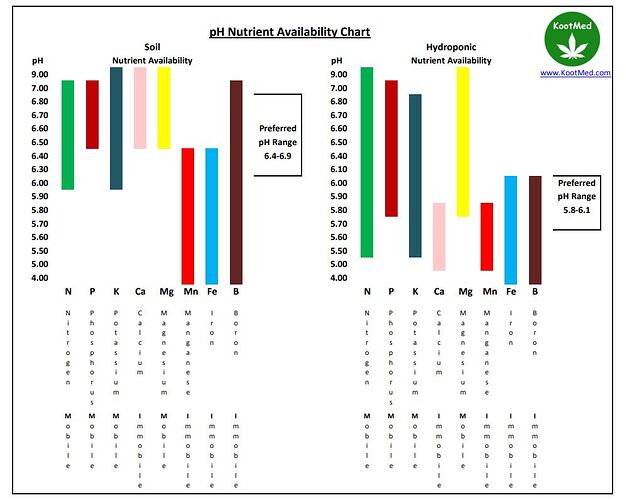