Been growing for 2 years now. First time came across this flowering issue. This plant is Gorilla Glue clone from my last female GG. The top of the plant has nice frosty mugs while the bottom half has what looks like seeds but I plucked one and it wasn’t. They aren’t frosting nor fattening up. I’m also noticing the plant next to her showing some of the same signs. I have recently added some supplemental lighting of far Red, blue, green and UVA. UVA only on for 4 hours. I have attached some pictures, hopefully you can see what I am talking about if you focus on the bottom half of plant. Thanks for reading! 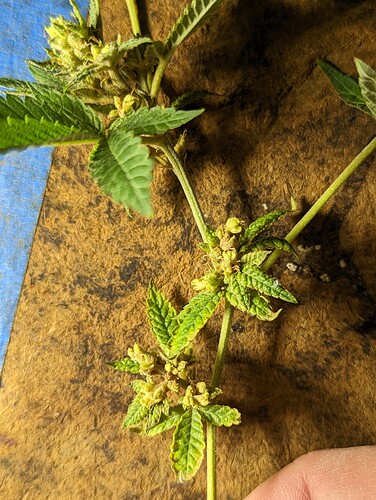 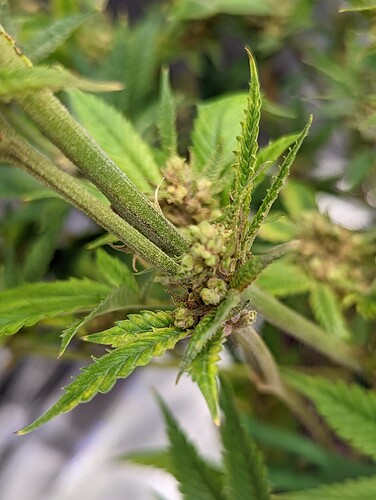 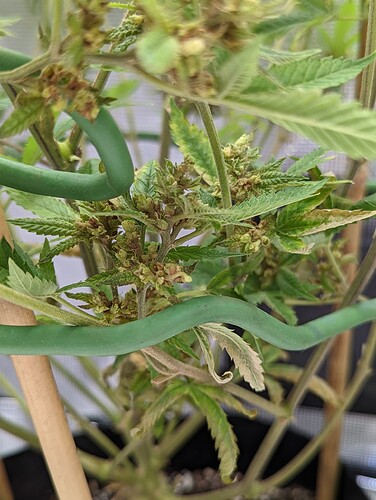 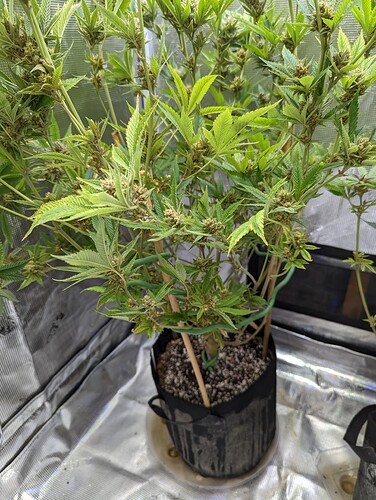 One more pic of entire plant 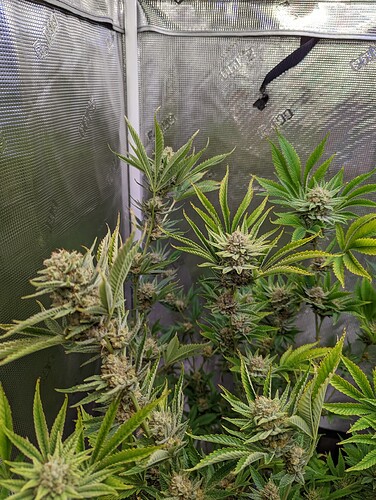 The calyxes arent packed as tight together as the upper ones

So what would cause this?

Here is a good image that I just plucked off. 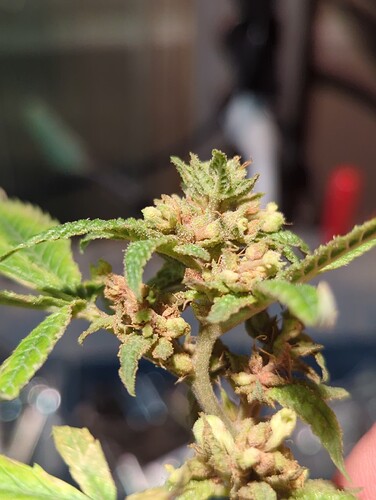 Lower ones get less light and dont grow as much

Def looks suspect if not pollen sacs. Kinda hard to tell from pic but i did notice something different, your plant is light stressed hard. Praying that much is def a sign of it let alone the deficient looking leafs on top as a result. Little pray is not bad but that much is

I got those on a plant I just harvested I am inexperienced and have no answers, but mine also started foxtailing on upper buds at same time it devoloped these. The ones on my plant had pistils. They just looked like really loose immature new buds. I just figured whatever prompted the foxtailing also triggered this new growth.

I grew a couple GGs that finished very early. Just were quick to quit growing new flowers.
Yours show little to no white pistils. They might be done.
If I am seeing correctly they seem to have a large amount of amber too.

Looks like very mature calyxes, and some necrosis in some of the larfy bottom bits. I’ve had some weird shaped growths from time to time kinda like these.
Long as there no nanners i wouldn’t worry much.
And hopefully that dead (necrosis) is only on the bottom bits.

The brown bits here is what im talking about.
The weird growth sticking out could just be a result of the briwn bit dieing off fir whatever reason they did, and the “new growth” coming out of it just mutated a bit.
Kinda like when one is re-vegged the fresh new growth is a weird looking at first

Thanks for the input everyone! So my lower buds simply don’t seem like they produced any pistols. The thing that changed in my environment was my lighting. I added (4) far Red supplemental pucks, (2) UVA pucks, green puck, and a blue puck. In addition a UVA light strip. The far Red pucks are on for 12 hours plus an additional 15 minutes after lights go out. The UVA Strip on for 4 hours a day. The UVA, green and blue pucks on same 12 hour light cycle. My feeding hasn’t changed, always used Jacks 321 and their recommended feeding schedule. Could the increase of lights be root cause of this bud behavior?