I am in the planning stages of grow room. The most logical place for me seems to be an unused closet in a spare bedroom of my house. Closet is about 6 ft x 8 ft but would only be using about half of it. Only looking to grow 1-3 plants to begin with. Trying to be inconspicuous as much as possible, I don’t want to have a bunch of electrical cords from lights and fans and such running from wall outlets outside of closet to the closet/ grow room. I was thinking about taking out the bulb in the overhead light fixture in the closet and screwing in one of those adapters which has 2 outlets on it and plugging my lights into this. That way everything is contained in the closet and no visible evidence exists outside of growing room.
Will this work or am I asking for trouble? Is there any difference between plugging into a 2 outlet screw in adapter coming from the ceiling light fixture socket and plugging into a double wall outlet?

@TxFlyer the one place you dont want to skimp is lights. It seems like ehat youre talking about is for a single bulb like ypu have is a lamp or overhead light? These lights will not produce much at all. Youre gonna want at least 400w or 600w HID or LED. Lets ask @dbrn32

@VelcroThumb…no that’s not the case at all. I should have explained it better. The screw-in adapter has 2 outlets on it so I can plug 2 cords into it. Or I could even plug in an additional 2 or 3 plug adapter and run more lights off of it. I will try and post Amazon link. 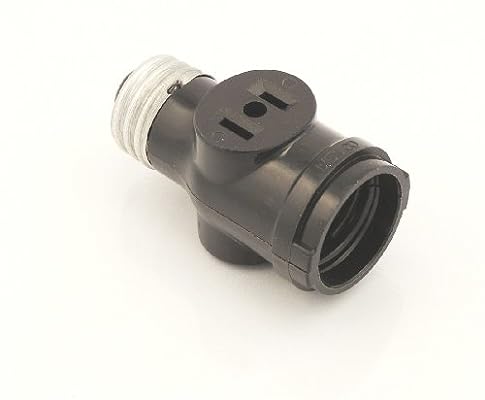 @TxFlyer youd be better off with a surge protector

@VelcroThumb…I like that idea! I’d only have to plug one cord into light fixture and then I could run lights and fans and things into surge protector? Are we talking about one like my computer/monitor/printer/speakers and all that are plugged into? It has like 6 outlets for plugs on it.

@TxFlyer that socket adapter wont work for our application. Most of the plugs you use are 3 prong grounded. The socket you have listed is 2 prong. All of our plugs are 3 prong, except for the desk fans

Are we talking about one like my computer/monitor/printer/speakers and all that are plugged into? It has like 6 outlets for plugs on it.

Exactly plug the surge protector and run everything off that. The only issue you might have is what all is running on that circuit. I’m no electrician, but you have to add everything up to make sure you aren’t overloading the circuit.

Just an FYI You will need one or two lights and fans for circulation. And also an exhaust fan and filter to get rid of the smell when the plants flower. You can recirculate the air or vent it to the attic or whatever.

And as noted has to be grounded outlet @VelcroThumb Good call!

But, if you are using the actual light bulb socket, many people that use CFL’s use that fixture as an “extender” then screw a “Y” 2-bulb fitting into that.

After following along and not needing to make a light recommendation, I may have an idea. Really depends on your home wiring ability.

If you remove the light fixture or Edison base, whatever is in your closet ceiling, it should just be a 4x4 electrical box with a mud ring underneath. You could then just install a receptacle in place of the light. That should solve all of the foreseeable issues.

It is much like changing out a regular light fixture for a ceiling-fan.

My LED is only 300W, so I added “stadium” lighting boosters late in flower.

Any reason this wouldn’t work? Not totally against taking out fixture and putting in outlet but then I would have to replace everything again some day. If you guys think this 2 prong to 3 prong adapter is just asking for trouble, then I will put outlet in ceiling, just trying to take the easiest and stealth route. 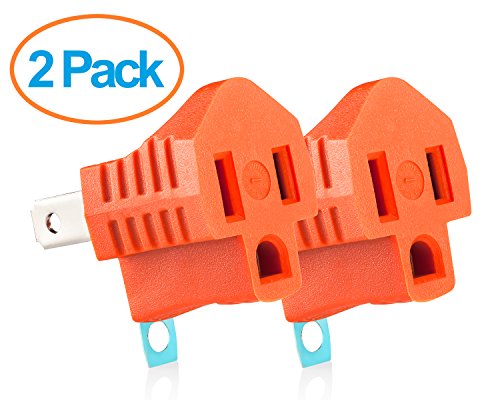 Remember that the wire that was run into the closet was not put in to supply power for grow lights and fans. You may very well overload the circuit and blow the breaker or worst if the wiring becomes hot inside the wall. If you decide to use the closet just make sure you only run what the wire and circuit are capable of handling. That circuit is most likely supplying power to more than just the closet to.

@TxFlyer just remember, youre gonna have an intake fan and exhaust fan, which are both 3 pronged. Then your light is 3 pronged as well

I could imagine that with my 85watt CFls

There is actually a reason the adapter isn’t a good idea. It will give you a plug that fits, but you won’t be able to reference earth ground with it. Those were designed to go in old two prong receptacles. You would put mounting screw through that tab and tighten. That would at least ground to electrical box.

You probably are okay, load-wise. Most houses in America have minimum of 15 amp circuit breakers now. You can look in your breaker box to be sure. A ceiling light is usually wired in a circuit with other ceiling lights so it doesn’t draw much. You could find all the other things on the closet circuit by playing with your breakers and replace any incandescent bulbs with CFL. With a 15 amp breaker, you have 120*15 = 1800 watts available. I doubt you will be anywhere near that with your grow lights and fan. But you would be if you plugged in a heater or AC. You can load it that much and then the breaker will flip to protect the circuit. The wires in the walls should never get hot.

Your screw-in adapter is fine but there is an even simpler one with just a 2 prong outlet. Either way, you need the three prong to two prong adapter and then a power strip. Plug your timer into the power strip and the lights and fan into the timer. All of these are usually rated for 15 amps but look at the fine print to see that they are. You probably need an extension cord to get enough switched outlets. Get a 16 gauge cord: $2 at home depot.

If you really want to be super safe you can run a ground wire into your closet. Maybe there’s one already in the box? But you don’t really need one since you don’t have any water fixtures in there to get electrocuted. Electrocution requires you touch a hot wire AND a ground, so that’s pretty unlikely. Most table and floor lamps don’t have ground wires. My growlights don’t.

Don’t mess with the fixture to look in the box until you find the right breaker and turn it off!

There is a single grounded outlet you can screw on to a round ceiling box at Home Depot. If you are handy with electricity, you know what to do. If not, find a friend but that probably violates the first rule of growing which is tell nobody.

@skrower…the plan was never to hang anything from the adapter. I could put a hook in ceiling and take all the weight off the light socket. All it would have plugged into it would be the surge protector power cord.
@1BigFella…I figure the ground is in the house for a reason, so I may as well use the wall outlets.

My biggest concern was having 3 or 4 power cords going from bedroom wall outlets to the closet and drawing attention if anyone ever went in the room, but now I realize that I only need one cord from the surge protector in closet to bedroom wall outlet. That was fairly well hidden by rearranging the bed and putting a small nightstand between bed and closet door. It’s an unused room since the youngest kid moved out a couple years ago but still don’t want to attract any grandkid attention to that room if possible when they come visit. They’ve never been in that room/closet before so I didn’t want to give them any reason to check out where a bunch of cords were going. With the bed/nightstand arrangement and the light out in the room and door closed and only one power cord, no one can even tell the room is being used. Looks just like it did a couple of days ago.

Thanks guys for all the responses but it appears the surge protector solved most of my set up problems!

Use a heavy duty (outdoor) extension cord to get power to your closet. Plug either your power-strip or your timer then your power strip into that.

They have colors now that aren’t safety-orange, and if needed, you can tuck one cord under the carpet or baseboard to hide it.