RFI, or Radio Frequency Interference, is something we should all beware of. As a ham radio operator and grower, I am privileged enough to be able to experiment with, research, and learn from both of my passions. It has come to my attention recently that a few acquaintances of mine have had their grow operations discovered because of this culprit. I will go into detail about a few things that we all can do to remain undetected.

RFI is all around us, when we get in our cars, turn on our computers, our televisions, or get a text message. Have you ever been listening to the radio in your car, heard a blip blip blip noise and KNEW you were about to get a text message or phone call? Those small blips you heard were RFI and in theory should not have been able to be picked up on your car stereo. One of a few things happened there, either the antenna or stereo on your car was not shielded properly from the factory, or your cell phone is operating on a frequency they are not exactly assigned. Sometimes it is COMPLETELY on accident and typically goes unnoticed.

But how does this apply to us growers? We don’t use stereos, ham radios, or cell phones in our grow stratos, how does any of this apply to us? How would our grows become detected because of RFI? Let me go into that information now. Here in the USA specifically, the FCC (Federal Communications Commission) regulates the airwaves. Everything from stereos, walkie talkies, and anything that can transfer voice communication wirelessly through the air has to go through the FCC first. This also goes for anything that can interfere with that communication. For virtually all products produced 100% in the USA they adhere to the strict mandates that the FCC imposes upon them, meaning that they have been thoroughly and rigorously tested and do not have any major impact on wireless communications and have gotten the “FCC seal of approval” which is usually just a little gold sticker with “FCC” emblazoned on it. CHINA however, does not have to adhere to those standards. In order to be imported, they in theory would first have to get approval but China has ways around everything. By generalizing their shipping manifest to something as simple as “Light products” they can circumvent those FCC regulations.

An acquaintance of mine just had to destroy some plants for security reasons, as law enforcement had been tipped off to the grow. They were tipped off because of RFI in the area. RFI can be pinpointed with something as simple as an AM radio tuned to an off station and some headphones. Just listen for the interference to increase and decrease and you can find the source with relative ease. There are even handheld meters that can do the same, which some police agencies are now acquiring. The grows can be tipped off because through my testing the ballasts for MH and HPS lights which used to be magnetic are now electronic, typically from China, and give off pretty substantial interference. LED lights imported from China as well, although less, do also give off decent interference as well. So there are some things we will all need to do to protect ourselves in the future.

But stratos, how can we protect ourselves from this RFI you speak of? How can we avoid detection? It is simple my fellow friends and growers. I essentially live in a cage. A cage you say? What are you some kind of animal? No, a FARADAY cage. When I move (which I do often) I always remove the drywall and install copper mesh along the studs of the building, top and bottom. I do this to eliminate RFI from jacking with my radio bench, little did I know it would also secure my grow. Because my radio bench is inside a copper tomb basically, I have to run my antenna outside to get signal. HOWEVER no signal can come in, and no interference can leave thanks to the copper mesh all around me. I had no idea RFI was an issue until my friend brought it up to me that they had to destroy some plants and had to relocate completely due to detection caused by RFI. Which led me to investigate ,with my radio setup in my car, how different lights would affect them. I still have to see at what distance they affect, but I CAN CONFIRM that within 15 - 20 feet they do give off a noticeable amount of RFI which can lead to detection if not remedied.

Take my word for what it is worth, but just know that this can potentially be an issue for all of us if not taken care of. Hope this was informative post and helps a few of you out. Thank you, and as always have a nice day. Happy growing my friends.

People have been unexpectedly getting pinched for this for quite some time. Have to watch out with those digital ballasts for sure!

@stratos934
This was soooo interesting to read I was really intrigued…
I grow outdoor, but I really enjoyed your post, thx

People have been unexpectedly getting pinched for this for quite some time. Have to watch out with those digital ballasts for sure!

It almost resulted in a friend getting popped, which prompted a lot of the local growers to really up their security. I have known RFI has been getting people caught up for a while, but with the lack of information about the subject I felt the need to help inform everyone. We all share the same passion, and we should all look out for each other.

This was soooo interesting to read I was really intrigued…

I grow outdoor, but I really enjoyed your post, thx

Thanks @Ragnar glad you don’t have to deal with all this craziness! But help spread the word and hope that we can keep everyone safe and secure!

I skimmed what you wrote and still can’t connect rfi with FedEx nor can I make the connection of growrooms and rfi. Is it that the equipment is detectable? What if my lights are from china, then I’m good? I’m confused

I know a few of us have had the discussion before, and someone will usually pipe up if any of us see a member looking at digital ballasts. I’m sure we don’t catch them all though.

I skimmed what you wrote and still can’t connect rfi with FedEx nor can I make the connection of growrooms and rfi. Is it that the equipment is detectable? What if my lights are from china, then I’m good? I’m confused

I’ll give you the summary:

I know a few of us have had the discussion before, and someone will usually pipe up if any of us see a member looking at digital ballasts. I’m sure we don’t catch them all though.

It’s not just the digital ballasts, the LED lights do also give off a noticeable amount of interference as well.

At least the higher wattage ones do, can’t speak for the smaller ones.

Ahh now I get it. Thanks!

Some may, but I would respectfully disagree that they do just because of higher wattage. At least not at measured level that’s noticeable.

What if my lights are from china, then I’m good? I’m confused

Any and all grow lights produce RF. I climb communication towers for a living and can put my personal RF monitor under any light and it goes crazy. I’ll see if I can’t get some pictures

Something to think about when you hold that cell phone up to your head.

I don’t climb cell towers, but I do something similar more on the power generation side of things. We have monitors and testing equipment, and I’ll agree that if you’re looking for rf it’s not hard to find. But that’s partially in our favor. There’s so much around that minuscule amounts are normal.

It’s impossible to make a blanket statement that something is good or bad by type. A lot of the more modern digital ballasts are protected by filters on the input and output. So even the biggest culprits can be perfectly safe. I could see how some shitty led drivers could pose an issue if they’re large enough. But most of the quality drivers are going to be protected as well. Maybe not to the point that with a meter you couldn’t identify some, but the amount you’ll pick up will be easily justified as normal household amount. All of the big hitters are certified to current emc guidelines, that I’ve seen anyway. It’s probably one of the features you pay a couple bucks extra for and don’t realize.

Ok so I just bought a 600watt digital hid
By ipower
The ballast is a foot away on outside of tent and foam wall. About 50-65ft off of Rd
Will it be detected??? Will they know it’s a light or …

It honestly comes down to frequency and what equipment your using to test for it right? @dbrn32 I’m not familiar with the RF produced by the electrical equipment, what I’m more interested in is the light itself.
I work with different frequencies than that produced by light but from my understanding all you would need to test for something of a certain frequency is test equipment designed, programmed, and calibrated for that frequency.
I have hunted interference for AT&T using only a spectrum analyzer and an antenna known as a yagi. It’s crazy the things I find that cause interference. Anything from people’s garage door openers to cable tv leaks where the cable comes out of the ground into neighborhoods.
Based on my knowledge, all I would need to find a grow op, is a spectrum analyzer that was calibrated and programmed to read frequencies equivalent to what a grow light emits and a directional antenna to pinpoint where its coming from.
I’m open to correction here. I’m only speaking based off the frequencies that I work around and not the frequencies emitted by different light spectrums, but I would think it all works the same.

More than half of this popular lights spectrum

Is in the detection range of this spectrum analyzer, with the right directional antenna, I would think I could find anyone using this stuff, especially since these are frequencies not found emitted by many things. Infrared is 730nm. Not much in a house emitting 730nm. 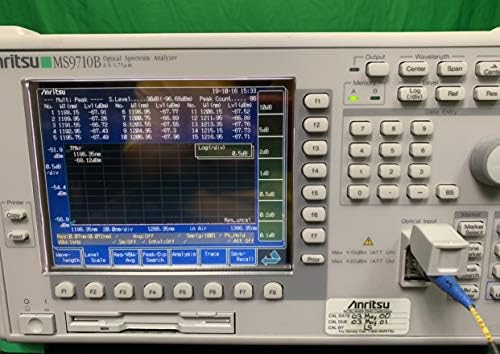 So personally I’m safe for now, definitely my government and police don’t have that equipment… But it’s a good point, also I can’t rebuild my house to put copper in

I think that many ar get busted because they don’t obey to the first rule when you grow weed in a illegal state. DON’T TELL ANYONE!!!
Also if you get to much stuff from outside your country can be a head’s up for government institutions (definitely packages from grow shops or seed banks will be extremely useful for them)

Every a19 bulb 3000k 90 cri should emit 730nm. It’s far red wavelength fairly common. In fact that same bulb using something like a Cree, citizen, or osram chips will produce a better spectrum for growing than that grow light.