Leaves brown up and crisp at the tips, can´t detect the pattern tho

First of all big ups to this forum, just discovered it, love it! I´m quite nooby still but finally managed to get my Royal Bluematic autoflowers through veg. Since active flower i started to see the changes on the leaves and the red stems (maybe normal?).

See the description of the situation and some pictures below. I´m curious what you think it and am looking forward to hearing your roasts

The patches on the leaves appear pretty spread out throughout the leave, no center to outer or tips to center. First yellowish and then turn brownish. Meanwhile the tips of pretty much every leave is yellowing and crisping too. SOme tips dented upwards, some down a little too. The first ones and biggest ones are dieing off slowly now. The patches are rather brown to yellow, just red on the pics due to the lights.

I know it´s probably about my Ph or the unknown bio-flower-stage fertilizer i use, but i unfortunately don´t have my pd scale yet… When i transplanted a week before early flower (i know, first mistake) i watered my soil with some nutrient water i mixed up. Since then maybe once a week i mix up a bit and feed it to the plant.

First two times with only a few drips of the nutrient in my 200cl water cup. Just now I gave it a stronger mixture with some more brownish water, still translucent. (absolute cringe) Meanwhile i´m watering permanently with two of these easy auto watering systems Link.

I use these because my previous try´s always died in overwatering and with these auto systems it runs quite smooth and constant. Super paranoid about watering and couldn´t imagine how a plant could survive a flush even.

The buds form quite nicely actually, but i am certainly limiting the plant somehow.

Can’t see all that well in the light but the tips look nute burnt. The perlite you used does it have time release fertilizer in it?

Welcome to ILGM! It could be getting root bound in that type of container. They do best in something like smart pots or air pots, where the roots can air prune. Without a way to measure pH or TDS, it’s hard to tell if you’re over or under feeding. You may be giving the plant just what it needs, but at the wrong pH it can’t absorb it. With that type of feeding system, you’ve got kind of a hybrid soil/hydro setup. In soil, they respond better to cycles of wet to dry between feedings than constant wet. Get a good measure of your runoff’s pH and TDS, and go from there.

The perlite you used does it have time release fertilizer in it?

Funny you mention that. I grabbed a bag of perlite today, and while waiting in line I noticed it contained time release fertilizer. Back it went. I didn’t realize they added fertilizer to perlite too.

@Drinkslinger I only know from experience lol. I have six bags sitting here I’ll just use outside in the veggie gardens.

At least you didn’t get it all home like me!!!

Probably the first time I was glad for a long wait in line. I was bored so I started reading the bag.

I bought Miracle Grow perlite because it was cheap and what Home Depot had. It wasn’t until I started having problems that I looked into it.

Yet another thing one has to keep in mind.

Haha same reason why I did but had to book back up to the grow shop and get this! Yes that’s all I needed for three pots lol!

I’ve been buying this stuff: 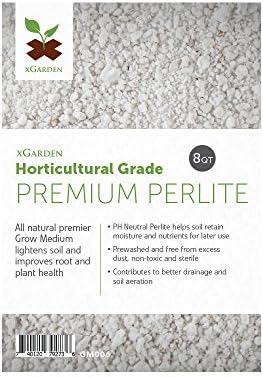 Alright hey thanks for all your replies! I indeed wasn´t aware that there is such fertilized perlite, the dude gave me a full bag without any label, told me it´s rather neutral soil. Eventually i see that control over ph is indeed the most important when it comes to issues, so i´m certainly getting it within the next few days.

Cheers and thanks again for your helpful tips!

Today for the first time i noticed on my main bud some white hairs are turning orange. Is getting closer to harvest right? What would you estimate how long it could still take? 2 weeks?

Yes sir, if the roots are struggling and unhappy, you’ll see it in the foliage, especially during flowering…you’ll see about everything in the foliage, honestly. For instance, if they’re cupping/canoeing, and reaching up, they’re thirsty, and trying to “catch” more water, or it might be a little dry or hot in your grow space. Any deficiencies will first show up in the appearance of the leaves. If they’re over watered and having difficulty transpiring all that moisture, you’ll see the leaves drooping/hanging down. The leaves are their warning lights.

Although it’s maybe not ideal for full time use, I’d hang onto that watering setup, in case you need to go out of town or something like that. Something to keep them from drying out while you’re away is a good idea to have around.

I would run the lighting full spectrum (both switches on) all the time, to give the plant(s) as much light as possible. 16/8, 18/6, 24/7 are all acceptable for vegetative growth on photos, and for the full life of autos. I’ve seen some who have had to increase the hours of darkness to get autos to finish up. Some strains seem to do better on one particular schedule than another, from what I’ve read from some sources, while others say run autos under as much light as possible to maximize the yield. I think a lot of it has to do with the specifics of each person’s grow, more than anything else, though. All that said, I’ve never personally grown an auto (just feminized photos and bag seeds, and clones from them), but I’ve followed several auto grows.

If you’re just starting to see red pistils and the majority of them are still white and standing more or less straight out, you’ve still got several weeks. Wait until you see 2/3 or more (~ or so) of the pistils turn red, then start checking the trichomes with some type of magnification, at least 30x is best. I got a pocket microscope with 60-120x for dirt cheap on Amazon that works great as long as you don’t want pictures lol! Once you have the trichome color you want, or nearing it, you can start flushing if you intend to.

I think you’ll do alright even with the banged up leaves. Just do your best to get her as far as you can as best you can. Everyone’s first grow is a crash course. Best way to learn in my opinion! You figure out as you go, and learn from each. Each grow gets better than the last. The people on here will keep you steered in the right direction!

One other thing, you might want to get some sort of ventilation going in there. You don’t want moisture sitting around in your buds once they start getting dense. The plants need fresh air, too. Not enough circulation/fresh air, there’s not enough O2/CO2 for them to breathe. Even a small computer fan would be better than nothing. Not directly on the plant, but enough to give the buds a slight breeze.

I was going to get perilite tomorrow and didn’t know about the time released fertilizer in it glad I was up late reading here. What’s difference between perilite and Vermiculite?

A hygrometer to measure temps and relative humidity is absolutely necessary. You can buy one for under $10.

How much and how often are you watering?

How far away from the top of the plant is your light?

Looks like maybe light burn and magnesium deficiency from that. Possibly pH.
Environmental factors need to be measured, too

@Uland
I have some thoughts. Most of the questions you answered, but I don’t want to guess the rest:
With the permanent watering sys, is the soil constantly wet?
Is that your primary watering “scheduler”?
Are you doing any manual watering to run off?