Latitudes: "Is 3rd Time The Charm?"

It’s 300 watts see where it says power draw 300w ± 5%… I set my 200w sf at 25-30 inches above for veg, I actually start seedlings at 35" watching for any stretch and lower it if needed… once the plants have their 2nd node I drop it to 30 if it isn’t already there… I then judge the node spacing and move the light up or down trying for a decent spacing, I like pretty good space on my main stem to keep the branches separated a little bit…
I would probably move the light up to around 25" and see what happens, I’m thinking that will get them going again, I don’t drop the light down and start pounding them with light until the stretch and that’s when I want to get closer nodes

Is this the light?

Is this the light?

No, I think that is their latest model… This is the one I have…

… It makes sense to keep it higher, but one of the issues I have is my small tent. It’s only 55" tall. After the fan, filter, and rigging, the height is even less… On my first grow the tops of the plants were higher than I could place the light so I decided to try to keep them shorter and well-trimmed on my 2nd attempt and it seemed to work (except for one gal that didn’t like several days between watering at the end. More on that issue in a bit).

Keeping them short is the right idea. I like mine compact too. Are you able to relocate all your things outside of the tent? It gave me a bunch of extra head room 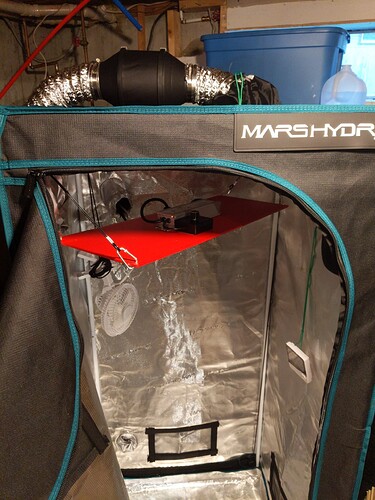 Ah yes I see, that’s a lot of light for the space but they’ll like it during flower. You’ll just have to get used to it using the dimmer and all will be good

Are you able to relocate all your things outside of the tent?

I’m definitely gonna have to take a look at that. I currently have a filter on both ends of the in-line fan. (I read somewhere that it helps to keep the smell under control, and it really has worked.)

I’m gonna give the young ladies a few days with the higher light and re-evaluate by the end of the week.

… Now… Some of you may remember the OG Kush Auto that sorta stalled close to the end on my previous grow. I got stuck with a few work trips out of town and she didn’t handle the time between watering very well. I decided to cut her down early and accept my losses, fully understanding the ramifications with doing so… 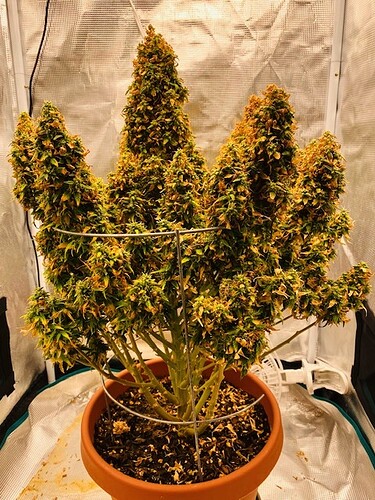 I managed to cut away almost all of the dead stuff… I’m now 3 weeks into the curing and it still hasn’t improved in color, and definitely not in smell quality… Sorta reminds me of the low quality stuff back in the early '80’s that I’d purchase at 1am at the bar, then go directly to my wallet to see how much cash I wasted. LoL!..

Any suggestions to improve the “sight & smell test” for this batch?.. This pic was taken yesterday… 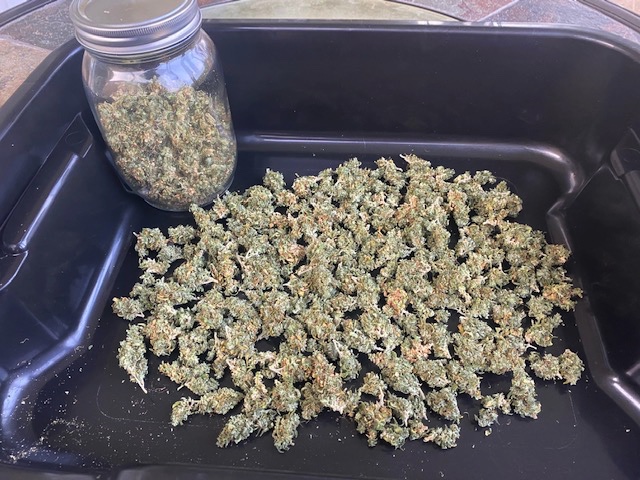 You don’t really get smell improvement until about 2 months in and they get really good at about 4 months, my 10 months zkittles are excellent every time I open my bag it’s like pure candy

Hey @MeEasy … Earlier today I came across one of your threads… Circa March/April where you were doing some Autos and in the process of a move?.. Can’t believe I didn’t see it sooner, but I seem to go down various “rabbit holes” every time I surf this forum.

You had them trimmed pretty “high & tight” (Flo?), which was what I’ve been trying to do… So I tried to emulate your success… God help me because I have nowhere near the talent that you do. LoL!..

… But more importantly, I really hope you’re doing well and that the C is still in remission (huge thread, and I didn’t cover it all)… I have 2 family members going down that road… I’m currently on STD for another few weeks due to some surgery… Brother, what doesn’t kill us just makes us stronger!.. Love the tat by the way!..

… I’ll post some pics of the trimmed young ladies once the lights are back on… (And yea, raising the light seemed to do the trick… Thank you!)

like always… thank you for your kind words and hope you recover well. I’m trying different things when it comes to defol, after reading a couple of articles from Nebulahaze on growweedeasy on defol she explains how it’s more about the timing so I have been pretty much following her tutorial. Then I read somewhere else I can’t find it again (dumbass) it said that once your plants trichomes are right where you want them you take off every leaf you can see the stem of this makes the plant think it’s under attack by something and the plants only defense is to make more trichomes… it’s sort of like the 24 hour dark before you cut em… I’ve been playing a little bit with the three different things I just wish I had the means to do lab testing on the difference when I do or don’t do certain things, but then you have to do clones so it’s more of an even playing field… I can go on n on I have a problem sleeping so I sit and work on this stuff in my head lol… anyways after stripping them down I put them back under the light for a few days to a week… it seems to be giving me more sugar on my buds but without the lab n clones etc I will never know 4sure

Sorry for the book I get to babbling

Ha!.. So do I… I’m in the eastern timezone but I’m routinely up way too late for my own good (like right now)… It doesn’t help when part of your abdomen has been removed and you can’t crawl into bed (thank goodness for a comfy recliner). LoL!..

… I was going to try to post pics on Friday, but here are the mid-week pics immediately after their trim (tight, just like Flo maybe?)… I figure if I keep it tight it will be easier to manage. I dunno since I don’t have much experience… Hell, I’d love to live in any of your tents. Ha!.. I think they are doing ok for right now… 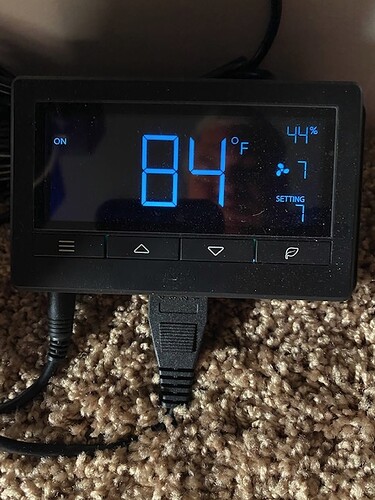 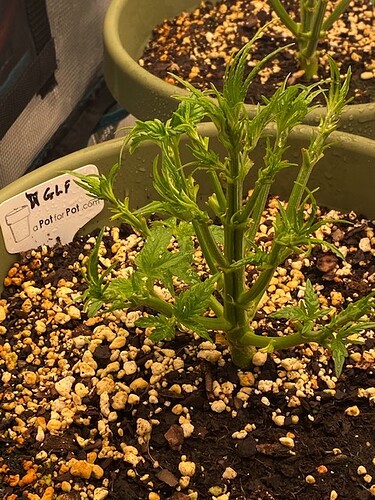 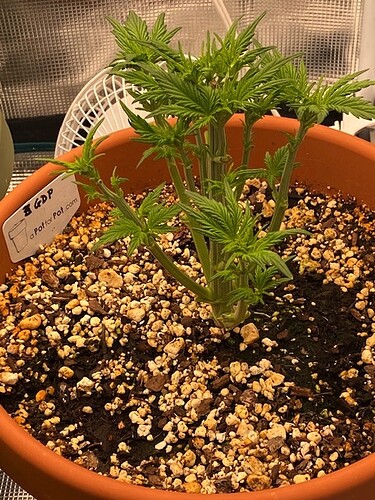 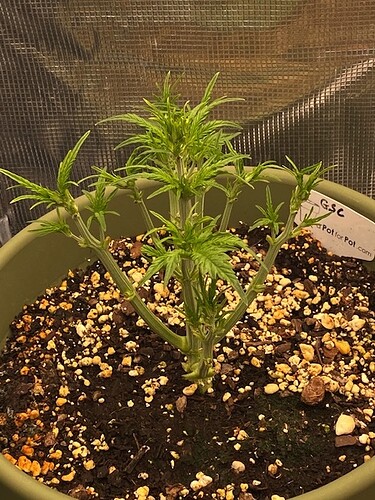 … They’ve responded well so far, but a long way to go. Ha!

I don’t really start defoliation until right before I switch to flower I’ll take a few necessary leaves that are just blocking the light after trying to tuck em of course. I do the first one right before I switch to 12s and then uncover budsites at 2nd week after switch then another good defol between 3rd n 4th week making sure to leave enough to get to the end because after about 3 or 4 weeks they won’t make new leaves at all… once they look close to done I’ll watch trichomes until they are right there and I strip then to just sugar leaves putting em back in for 4 to 8 more days depending on the trichomes… I think this one explains better I was half asleep when I wrote the other one

Here’s the “weekly Friday pics” of my young ladies…

… The curling issue seems to have corrected itself, but now I’m noticing some browning of a few leaves on my Girl Scout Cookies Auto (last pic)… Ugh!.. 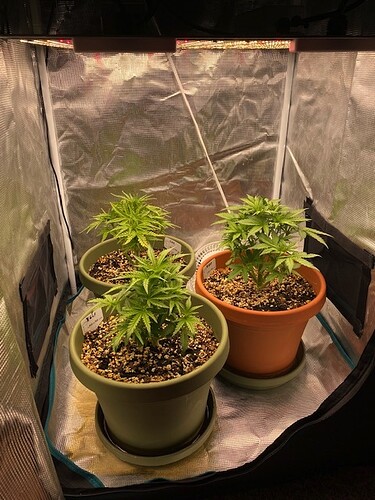 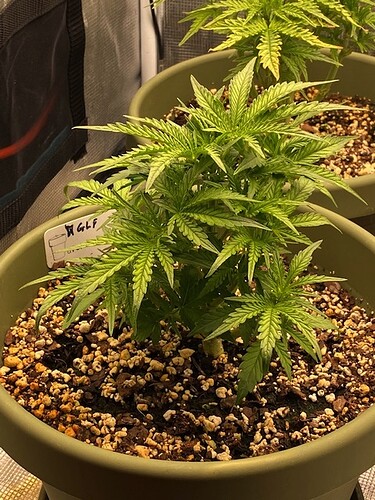 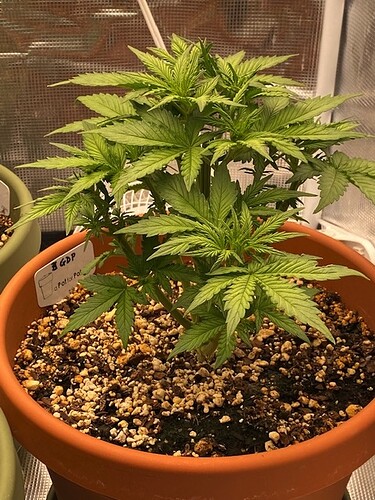 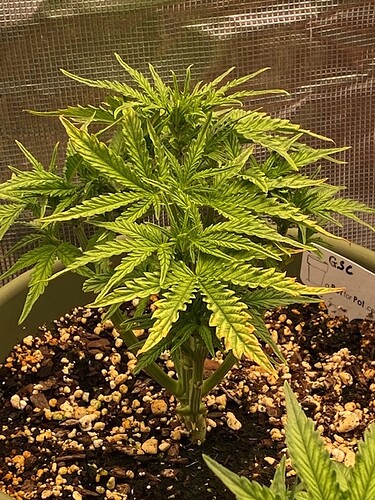 … Cheers everyone!.. Have a great weekend!..

My guess is it’s just nuteburn you did such a heavy defol the nutes had no where to be stored so they overwhelmed what leaves were left , I personally don’t do an underbrush defoliate until just after their flower stretch but you ll probably end up with more cola sites you re at about where my older girls are at (even though I had a slower start from me testing a new starting light configuration) 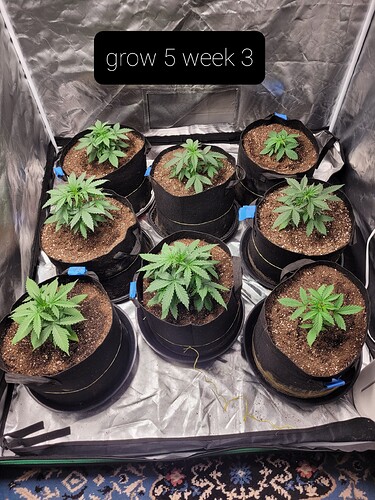 I’ll throw a guess at the issues in the last picture, zinc 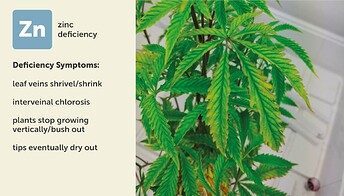 Ha!.. Yea, I trimmed ‘em pretty tight… That’s because I’m tryin’ to keep them really small and dense due to the size of my tent… I really have no clue what I’m doin’ other than what I google and read…

Thanx for the replies @GreenSnek @MeEasy @Underthestairs … Everything you said makes perfect sense… Heck, I was looking at either a Nitrogen or Iron deficiency (leaning towards Iron due to it being only the top leaves), but it may be zinc because I’m maybe seeing some of the other effects…

Pics from this evening… Should I be worried, or should I just let 'em go? 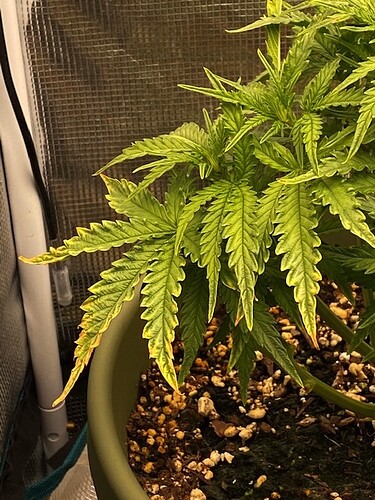 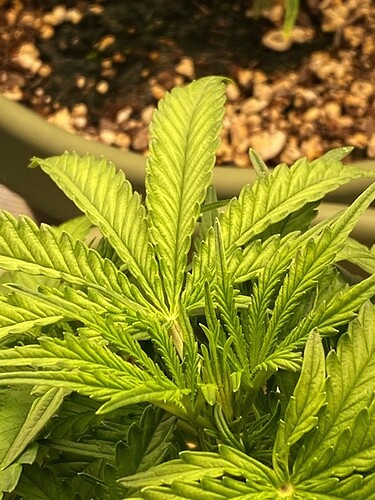 … Is it a big deal or should I just “let it ride” for a while longer before addressing it?.. Heck, for that matter, is this something they will grow out of as they mature?..

Gotta admit that I know zero about using various nutes. Yea, I read and understand the concept and effects, but I just have never used them… I’ve just been using the Bergman’s mix for this grow as well as my previous two… 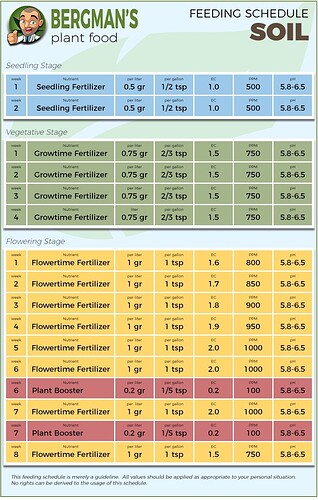 … Gotta love the cheap entertainment that is a newbie like me!..

She’s definitely expressing a need to you. And I would address it, once you get it figured out.

Where is your light at for height? And power?

I agree… I just don’t know what my next step should be… I mean, I really can’t go down to the local nursery & garden center and ask; “What’s wrong with my pot plants?” without expecting a visit from the long arm of the law. Ha!..

… Don’t currently recall the numbers for the light, but it’s posted above…

What should be my next step?.. Today they look even healthier, but maybe my mind is just playing tricks on me… After all, I did sample some of the OG Kush that is finishing it’s curing process. LoL!.. 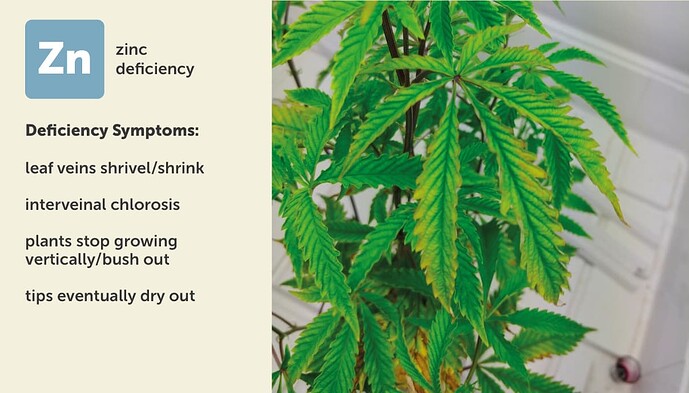