Does anyone know a way to get rid of Japanese Beetles eating on your plants? Any suggestions are greatly appreciated. 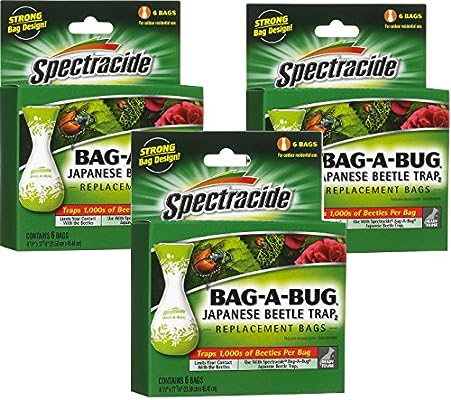 Last year was my first outdoor grow. I had a Japanese beetle problem in my grow area. Good thing is they never touched my plants. All the wild raspberries took a beating though.

I have 3 autos growing outdoors that popped up on May 7th and are flowering really nice right now. I check on them each day and it seems like there’s usually only one Japanese Beetle on at least one of the plants each day. And each time I find one on there I kill it but I’m afraid they’re going to eat up my plants before they’re ready to harvest. I was hoping someone might know of some kind of repellent that is safe on the plants. Thanks for the suggestion on the bags from Amazon, I’ll look into them.

You could try food grade DE, but I’m not sure if that works for beetles like it does for smaller insects. Let me tag @garrigan62, I’m sure he has a remedy

DE wont do much good. and they fly in and fly out the traps looks to be a good idea But I just read in a couple places that the traps will just draw more beetles to your area so do not use

If you have enough property, setting them away from your plants can’t hurt.

They say you have to put a lot of them way way out from what your trying to protect.

Here are a few things you can do. Hope this helps

How To Control Japanese Beetles:
•Treat with a combination of Milky Spore and NemaSeek Beneficial Nematodes in spring.
This combination is the most effective treatment for prolonged control of the grubs.
Nematodes help distribute the Milky Spore through the soil. Apply Beneficial Nematodes
once more in late summer or fall. Use this Life Cycle Diagram to time applications.
Milky Spore Granules can be applied through a drop spreader.
•Apply Surround WP to foliage and fruit to keep adult beetles off. It acts as a physical
barrier and disorients beetles to deter feeding.
•Beauveria bassiana sprays are used for biological control of Japanese Beetles and kill
through infection. Spores of the fungus infect all life stages of Japanese Beetles and
can be applied to foliage or as a soil drench. Use BotaniGard 22WP for sensitive crops.
•Knockdown sprays of PyGanic or Azadirachtin products, like AzaMax, can limit adult
feeding on foliage. Effects of these sprays can be limited due to the beetle’s high
mobility and hard shell

The Best Way to Get Rid of Japanese Beetles

If untreated, the Japanese beetles can quickly destroy a garden
If Japanese beetles are pestering your plants and you’re seeing their nasty bites taken
out of stems and leaves, then you’ll want to stop the infestation as fast as possible.
The best way to get rid of Japanese beetles is to catch them as early as you can, but
no matter the size of the problem, there is always a way to attack them. Depending on
the extremeness of your beetle problem, often you can start small and work your way up
if the Japanese beetles persist.

Treat light sightings of beetles as soon as possible by hand picking the beetles from
your plants and placing them in a jar or plastic container. Leave the jar sealed for a
few days until the beetles die off.

Place the dead beetles in to a bucket half-filled with water and a scant teaspoon of
dish washing liquid, well mixed but not sudsy. The scent of the dead beetles should
ward off other beetles still in search of food. Leave the bucket in the garden for
three to four weeks until the beetle season has passed.

Lure beetles to where you want them in your garden by planting white geraniums two
feet away from the plant you want to protect. Once the beetles dine on the geranium
they should become paralyzed and drop to the ground where you can collect them.

Apply an insecticide to the damaged plants if the infestation is taking over and steps
one through three haven’t been successful. Products like Neem, rotenone and Sevin should
be able to rid you of the beetles, but follow the directions on the packaging carefully,
especially when using around children and pets.

Tip
To get the collection job going, turn the task into a contest and have helpful children each
take a jar or container. Award a prize to the child with the most beetles collected.

Warning
There are Japanese beetle “traps” available on the market which have scents that mimic
females and/or food plants the beetles enjoy. While you can use these, there are
speculations that they actually draw more beetles to your garden, increasing your
chances of having beetles.

When is Japanese Beetle Season?

Usually feeding in groups, Japanese beetles are most active during warm, sunny days.
In fact, once the adults emerge from the ground in spring (June), they immediately
begin feasting on whatever plants are available. This activity can take place for
nearly a month or two throughout summer.

Damage can be recognized as a lacy or skeletonized appearance of the leaves. In addition,
their young can be just as devastating. Grub worms commonly feed on the roots of grasses
and seedlings.

How to Get Rid of Japanese Beetles

It can be very difficult to rid the garden of American Japanese beetles, especially
once their numbers have grown. The best defense when combating these pests is through
prevention and early detection. You can improve your chances of avoiding Japanese beetles
by learning about their favorite weed plants and then removing them from your property.
Examples include:
•Bracken

Keeping plants healthy is another way to prevent Japanese beetle attacks, as they are
attracted to the scent of ripening or diseased fruits. If you do happen to have an outbreak,
simply pick them off plants or gently shake them off in the early morning. Place them into a
bucket of soapy water.

While there is really no surefire Japanese beetle home remedy, there are some tactics you
can try in addition to preventative measures. For instance, a natural Japanese beetle repellant
can include the addition of plants Japanese beetles do not like such as:
•Chives
•Garlic
•Tansy
•Catnip

Covering your precious plants with netting during peak season also helps. The use of
homemade insecticidal soap or castor oil soap is another Japanese beetle home remedy
worth trying.

If all else fails, look towards eradicating their young larva or grubs, which eventually
become American Japanese beetles. Treat the soil in your lawn and garden with Bt
(Bacillus thuringiensis)
or milky spore. Both are natural bacterium that target grubs and eradicate future
problems with Japanese beetle pests.

Did you find this helpful?
Share it with your friends

When it comes to insect war, I like using BIG GUNS.

But only if it’s absolutely necessary!

Thanks a lot everyone. I’ll try some of these things and see which works for me. I just don’t want it to hurt my plants or make them have a terrible taste. I really appreciate everyone’s input.

I use sevin dust if their not in flower…

@Sittingbull64 you are the first grower that I have seen say that. I concur with your conclusion.

If the Beatle in question has a soft exosleleton then DE would work. I would look into insecticidal soaps that are safe for food production, and usually the company lists bugs it will deter.

I was told a few years ago by an old timer to use wood ash on my potato plants to get rid of potato beetles. The wood ash is supposed to prevent the larva from feeding. No potato beetles showed up last year so I’m still uncertain if it works. Same might work for Japanese beetles. My plants last year went untouched by Japanese beetles. Purple Haze. Hopefully they leave my plants alone again this year. I think regardless I’m going to test it out to see if it works. It won’t hurt to try. If it works I’ll let everyone know.

After my first indoor to outdoor grow, I went back to growing indoors in my grow tent. Had to knock out five different pests, and latest was aphids. Sprayed them with Neem oil after getting them inside.
Hope it knocks out the last of the little critters. Too much work growing outside here. Should be more fun!

I agree with the indoor thing. I haven’t tried outdoor, but I have grown vegetables. I think you have enough issues to manage in a closet without throwing buggers into the mix.