Is this a Phosphorus deficiency? 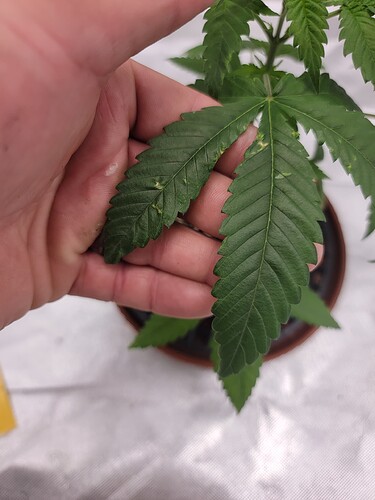 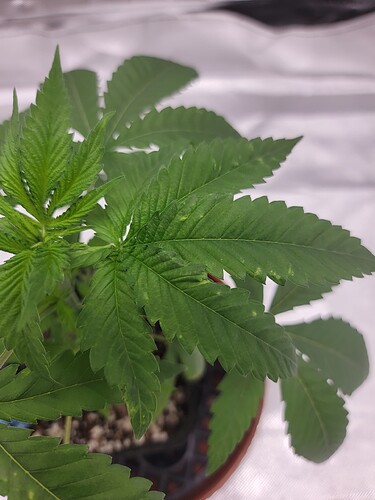 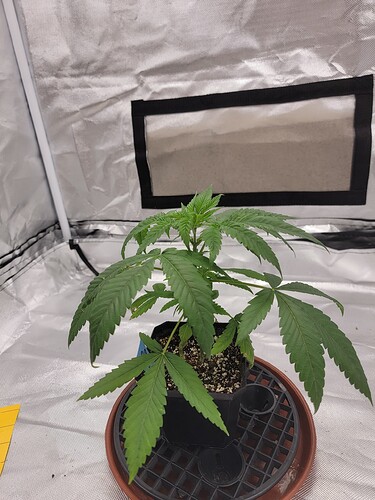 Are you planning on putting her in bigger pot?
Looks like she’s about ready to go to a big girl pot… looking gorgeous.

Those leaves have probably gotten damaged moving around or something. If it starts to spread we may have to have another look at her. Keep an eye on the new growth. As long as it’s green, she should be fine.

@HappyHydroGrower yes i do plan on transferring into a 1gal then into a 5 gal. I thought if i left her longer in a 4 inch x 4 inch the root system would be good and not having to worry about over watering when i up potted is that what yall do? Say let her veg longer in a pot for better root system?

Also from picks is that normal growth for the age of my plant along with node spacing?

Sounds like you’ve got a plan. I’ve always heard to uppot when leaves reach the outside of the pot. A lot of different ways to accomplish the same goal. Keep on keepin on!

So i havent watered my girl since transplant into a 1 gal containers of coco 70% and 30% perlite and she is praying and healthy i lift the pot and she is still heavy why is that? But no signs of overwatering or dropping leaves from underwatering i dont understand could someone explain this in detail or am i just crazy because i cant understand even thou its been explained in many ways im still dumb founded. @beardless @Graysin @CooterJuice @SynysterChris 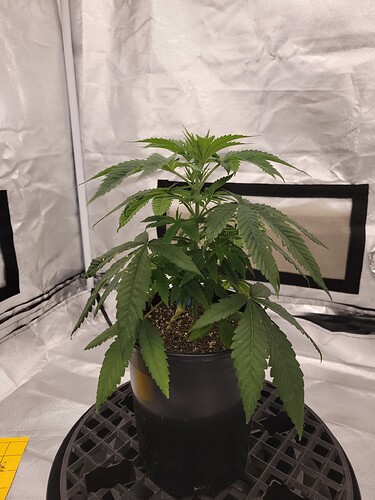 How many days has it been?
Looks perfectly healthy tho so personally I wouldn’t be concerned I’d just be waiting impatiently haha,
If you really wanna water/feed you could pull out a cheat code I used a while back in your same position,
Lowered my humidity to get the brat to drink more of her water so I could shove food down her throat

I love it. I personally have never done one because I just don’t have the time to train my plants. They pretty much get watered once every 2 days and chronic neglect.

1 gal containers of coco 70% and 30% perlite and she is praying and healthy i lift the pot and she is still heavy why is that?

In veg they just aren’t as thirsty as they are in flower. You should still water her once every day or every 2 days - in coco she has no buffer, so the water while it isn’t strictly necessary from a weight perspective will be very helpful for her root zone and for keeping the coco from leeching the CalMag out of her root zone.

in coco she has no buffer, so the water while it isn’t strictly necessary from a weight perspective will be very helpful for her root zone and for keeping the coco from leeching the CalMag out of her root zone.

This is something I have to force myself to get used to… I keep debating not watering when they still seem moist. So I imagine it’s a fairly common thought process for anyone coming from growing in soil.
Pretty sure for me, it’s likely been the cause of a few lower fan leaves getting lighter colors.

The thing about coco that I think we sort of all struggle with is that it’s essentially hydroponics light.

In hydroponics, the root zone is so open and exposed to air, the water is critical to maintaining healthy roots. Constant moisture in good parameters prevent the root hairs from drying up and shriveling.

The thing that can happen in coco by not watering once a day is that the coco will dry out more than we think it did, and the roots that get hit with the open air are effectively air pruned - it’s the same thing we rely on to keep our roots from growing out of fabric pots. So dry coco = air pruned roots even deeper inside the container. It doesn’t necessarily hurt the plant, but if you’re using coco to achieve rapid growth akin to hydroponic growth, it’s so so important to think about it like it’s hydroponics, and not like it’s soil. Letting those outermost root tendrils dry up just stops her from expending her energy growing upward, and keeps her fighting to get her roots established.

Dangggg that is a pretty long gap, I think the longest I’ve gone on my veg girls is 3 days and I’m guessing I probably should have watered at least on day 2, cuz when I did water just now one plant took 1.5gallons to even get any runoff, so like Graysin said it must be dryer deep down than we think.
For me it’s easy to see a partially dry surface and think it’s wetter the further down I go, since soil works like that.
Guess coco doesn’t and will have to get used to that haha

Oh and I vote yesss on manifold!
I’m doing a version of that on my veg girls, topped the mains to make 2, then when one on each plant turned out significantly taller than the other, topped that too and tied down, and my guess is from some lower branches being at equal height/light, they started getting fatter and bursting with growth equal to the main stems so I tied those down too. Ended up Like 4 legged spiders haha, I think yield per SQ ft is no doubt better this way. 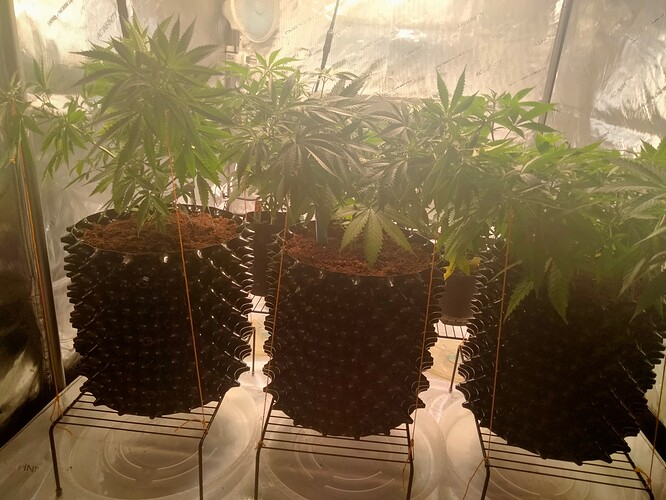 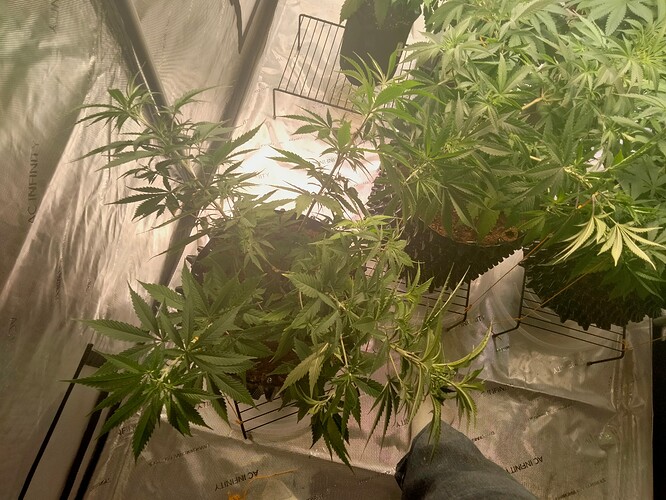 @SynysterChris how do you like those air pots vs fabric pots? And also i did the manifold 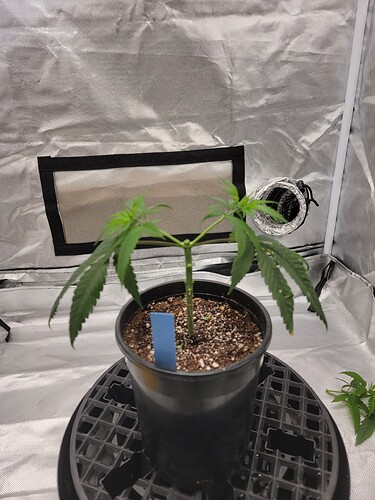 And yea i think i waited to long to water but it just felt heavy and heavy until the 5th day i picked it up and almost hit the light, it was so light but i just water her after 2 days it took about a 1/2 quart to run off. Then i chopped her🥲

So far my opinion is for the final home they’re likely the same. Root systems on the ones I pulled out of 1gal fabric looked damn good lots of tiny fiber roots like basically a solid cobweb.
But for intermediate pots I’m def preferring the airpots because they unscrew and peel off the rootball; getting my veg girls out of 1gal fabric was difficult, they kinda clung to the fabric.

Oh damn you went 100% on the manifold haha
I did mine pretty far into veg so didn’t trim off much, kinda between manifolding and just plain topping + LST with taking the overall Shape of the manifold way.
Can’t wait to see how that one turns out!

So far I think watering every 2 days in coco works, at least for me. I don’t water daily even though I know we can, partially just cuz I ain’t got the energy for that especially with an increasingly crowded tent… too many trays to change out, making and testing feed water,. and then if I’m also testing the runoff? Ughh

I think it is, I just did it so late that I didn’t have the balls to go all out, woulda been cutting off so much growth haha maybe on another group earlier on.

Yup I figured that was typical, so same I’ll stick to plastic of some form at least for anything interim. If I get sick of the 5.5gal airpots I’ll try 5gal fabric since they will die in them and never be transplanted lol

i know i always ask for help about growing and advice but i would like to know what is yalls favorite strain and why? Or even what is your proudest (idk if that’s a word) strain you have grown?

I can’t speak from knowing an end result as I haven’t even flowered this strain yet,
But so far I am ADORING this “Skywalker Ghost Kush”.
It’s such a short fat dense ball of fluff!
The way it’s grown so far has been so behaved and “even” that I debated not even doing LST(I did anyway) but hardly made a difference, its still so compact O.o
And the stalks are so thick and dense, I could hardly bend them!
This strain reminds me of Gimli from Lord of the Rings

Even without having flowered it, between it and the GSCs twice the height, I chose the SGK to be my next group.
And it impressed me there too, the clones only took 10 days to fill their cups with root.
…been meaning to move them to solo cups lol… note to self do that tomorrow 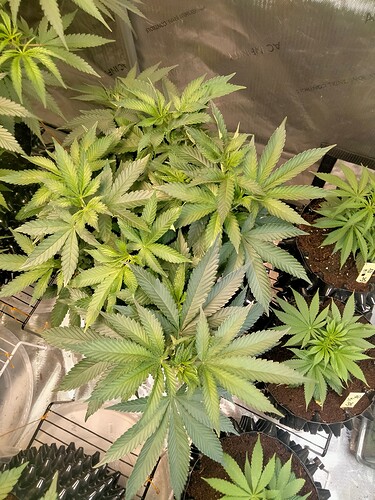 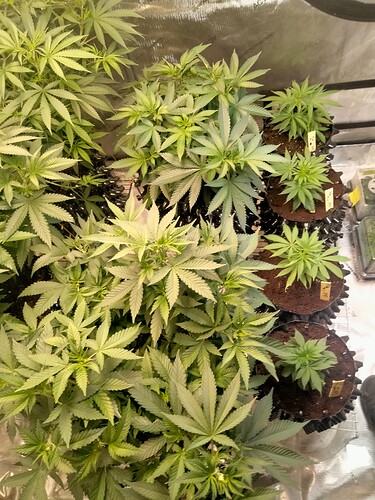 This is a top from topping one that I cloned a couple weeks ago, exhibiting the same features already.
Short stout dwarf haha 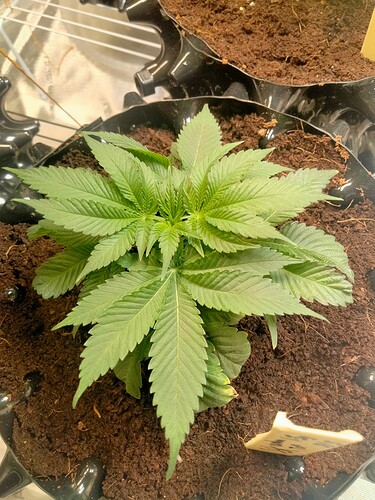