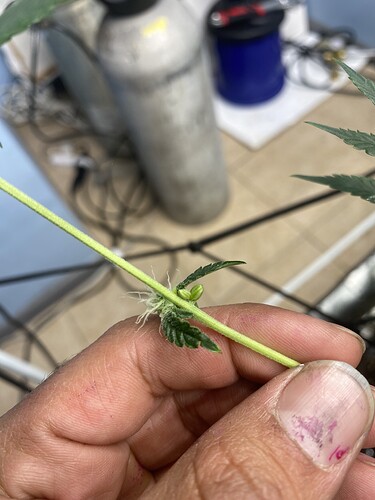 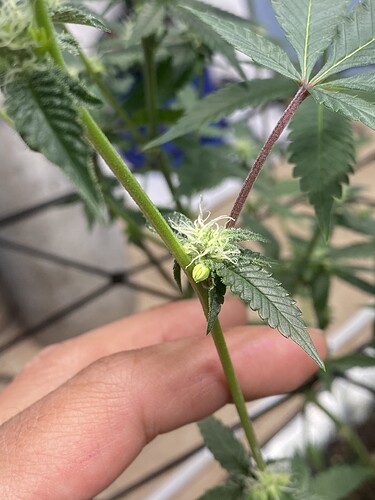 Looks that way. Also looks like some long node spacing.

Thanks bro! So bummed out about it ) :

I’ll keep a close eye on the rest of the plants. Hopefully none of them got pollinated-.- wish me luck guys

As far as sacks in picture they don’t appear opened yet, so I wouldn’t expect you see trouble from what’s pictured. I would definitely keep an eye on others though, seeds carrying herm genes can be pain in the rear.

All the luck to you bro, I had an issue early on with mine. Just a few sacks plucked and sprayed with water, h2o misting will help immobilize and sterilize active pollen spores. Seems to have worked for me. I agree with @dbrn32 those sacks pictured don’t look like they’ve opened yet. Hope your others are good

That’s a bummer both male and female parts.
Remove if you have other plants.
Good luck

1 king sherb from square one genes turned into a herm

Only one plant survived and it’s a king sherb. I’m still keep a close eye on this one

Not stress induced nanners, those are full on male flowers!

As stated by a few other’s…
Those are male and girlie part’s…
No hermi , bad genetics…
Sorry brother…
Hopefully you dont have anymore…

Those are male and girlie part’s…
No hermi , bad genetics

You’re seeing male and female parts on all those plants? Or does it look like they have been pollinated? It would only take one herm plant to create seeds in all the other plants, but having seeds doesn’t mean they’re all hermaphrodite.

Main reason I ask is because nearly a whole room of different strains going hermaphrodite means you probably have a problem. Something like light leak or major stress point.