I'm legal now with cannabis in my car

This is what I need to use to be completely legal in my state to travel with cannabis in our vehicle.

We are going on vacation soon and since were traveling all within the state, we can take it with us!

Other family from North Carolina and West Virginia are meeting us there too. Wonder why here??!!

We all get to smoke legally together here in Virginia… What a hoot!!! 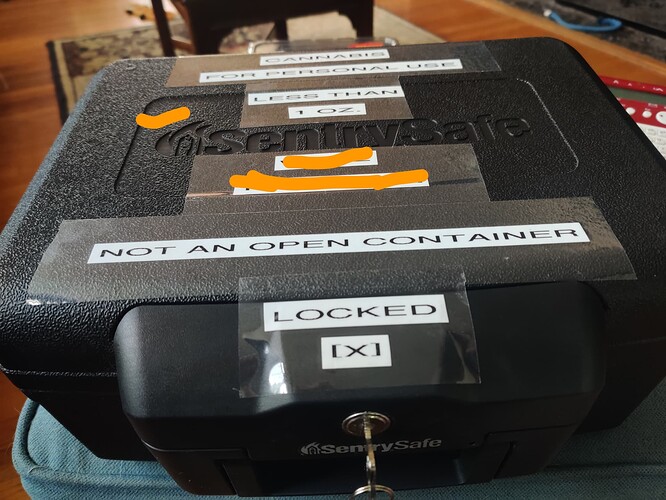 Im happy for ya! It is a great feeling to take your medicine with ya. The first time I drove home from the dispensary (i had just gotten my medical and my grow had yet to start) mine was in a stapled paper bag with the receipt on it. I would have much preferred your system.

Glad they eased up on the laws too bud. I’m in central va and thought for sure I’d be dead before it was even legalized here. Pretty sure they dropped the penalty for “plants being seen from the road” to a 25$ fine also. Which means cops won’t even bother. Good thing because my outdoor is huge!!

It is sad how different various states handle this and alcohol. My state is 100% illegal but you can buy a permit to grow rope. However, you can go to a bar or brewery, buy a container of your favorite tap and a piece of tape sealing the opening does the job.
Have a blast on your vacation. Cheers

If Congress would just legalize it nationally, wr can all move forward. It’s such a crap shoot now

Feel your pain brother. Kinda silly that you can buy poison without a permit that kills everyday.I drink myself but it changes me compared to smoking but it’s ok it’s legal. Not trying to rant but jeebus Gov’ get your shit together.

Pot is 98% less harmful to society than alcohol.

The big problem is there ain’t money in the cure!!! If they legalize it they will put so many people out of business. Every pill I’ve ever took for pain this plant does the same thing. I’ve broken my back in 2 different places and without it I’d be S.O.L.

If congress legalizes it Va, Az, Ca, Co, Wa, Or, Nv, and some other states I’ve forgotten will be in a bind. Guaranteed the federallGuv would have all kinds of cutouts and set asides favoring the lawyers, lobbyists, and big Pharma. Heck the lobbyists write all the bills, congress just votes on them without even reading them.

You would probably be required to get pricey permits and other such nonsense once they stick their big snout into it. No thanks, It became a states rights issue when .Guv dithered for the last 40 years.

My state had to try and fail three times before passing our current law. It has changed things for the better. The sheriffs out here don’t give a rip about a harmless plant anymore, freeing them up to do whatever it is they do.

The only good congress could do is complete and full decriminalization. Remove MJ from harmful drug status.

If congress legalizes it Va, Az, Ca, Co, Wa, Or, Nv, and some other states I’ve forgotten will be in a bind.

For what? We’re already legal and no law from the Fed is gonna change that.
Now if Republicans in this state had their way it’d be gone.
There’s a lot of conservatives on this site - more than I ever imagined smoked weed tbh - and I’m not sure they actually get anything from it since it’s such a negative and aggressive movement - 2 things weed should cure.

But the fact of the matter is - and it’s not political - it’s FACT - Republican politicians and the people who vote for and enable them are the problem. Not “The Feds”.

Interesting way to frame the discussion @Tylersays. I don’t vote for either one of the lesser evils, gave up voting in anything other than referenda issues. Gave it up decades ago when I realized, not a dimes worth of difference (other than the minutia) between the two parties. That is not political, as you say its a FACT.

Barry O could have removed it from the criminal narcotics classification any of the 8 years he was president. So could any other of the clowns who sat and are sitting in that office over the last 40 years. The US congress is captured by big money interests and doesn’t give a rip about you or I. That, my friend is a provable FACT.

States right matter. My rights matter. We worked hard to change the law in AZ. Anyone in another state can do the same as you in VA just proved. DC doesn’t give you your rights, they are only supposed to protect and secure them. You, or I have less than a bucket of warm spits chance of changing anything at the federal level. So I work where I can to make change, state and county.

I Hope we can agree to disagree on this as I respect your skills, and hope to keep learning from your grow ability. Sorry if I come across as negative and aggressive. Everyone has their own journey and mine has been long and winding. I’ve been on the wrong side of the baton as a youngster for… you guessed it weeeeed.

One thing I hope we can agree on. This prohibition will end. We have a critical mass now and we have many successful examples of states doing it well. In Az the only reason it failed so many times was baby boomers who were scared ala ‘refer madness’. Living in fear, they have had their time in the sun and now Gen X, Millenials, and Get Z all seem overwhelmingly in favor of ending the prohibition

Damn I don’t even have to transport my pistols like that here in Okiehoma. Nice cool day here today. Going to strap on my Glock 20 with my own Gold Dot nuke ammo, grind some bud up. Put it in a zip with a old pipe. Get on the Wing and roll to Tulsa. And to think they wanted to put me in prison for 20 to 40 years back in the mid 80’s for a grow… LMFAO!

I was so happy when we went legal in va

Yeah; that’s why I started my first grow 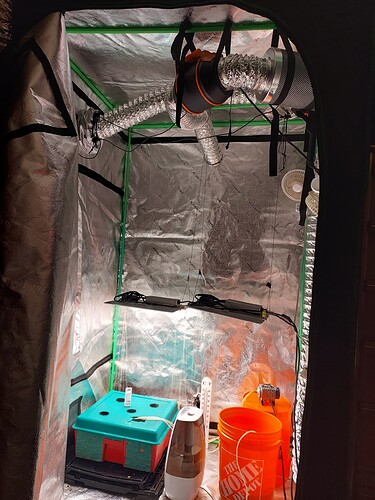 Interesting that you’ve got a double hose exhaust for your air system.

Why did you set it up that way? Just curious… mine’s just a single

Isn’t the intake from the filter?

I have two filters one on the inside to filter the air going out witch is at the top and a filter on the outside to filter fresh cool air coming back into the tent at the bottom. This way it helps controls temp and gives me more air movement so thats a total of two spider farms ac fans pushing air out and in