I want to move to a legal state! 🤬

It would be nice to know the culture in other legal states, please anything that you would feel that would relate to as to why someone would want to live in your “legal” state…!

@AmnesiaHaze Alaska is a little off the beaten path, but. You can have 3 mature plants per person and 6 total. Depending on what part in Alaska you relocate to it’s not always cold. Southeast Alaska is a rainforest and moderately warm temperatures. Nobody really cares if you grow, some people grow and sell. It’s not that big of a deal in this town and it happens all the time.

Please do! California is pretty damned weed-positive. I’m not even a young stoner: I’m retired and I know lots of old codgers and veterans who are interested. Some have actually used pain meds for years or are getting old-timers maladies that respond well to marijuana. So there is very broad support for medical and recreational marijuana.

There are dispensaries and hydro shops, plain old head shops, etc. even here in one of the most conservative Congressional districts in the state. Next district over is Daryl Issa’s! Even people I would never think of in connection with weed are telling me about the benefits of legal marijuana. Even conservatives who wouldn’t use themselves have some friend or relative who has told them about getting off opiates or relieving arthritis pain, etc.

We have had legal medical marijuana for so long that it is very accepted, though you might still get fired if you have to take drug tests at work. Likewise they are pretty strict about weed around schools or about DUI. January 1st recreational sales went legal, though recreational use and growing has been legal since 2016. Still there were lines around the block on the 1st to buy legal.

My county is one of the few that has prohibited any marijuana businesses or farms, but the City of San Diego takes up much of the county and it has embraced the full production chain. There’s talk that legalizing marijuana might actually change the makeup of the County Board of Supervisors, as old anti-pot warriors get replaced! Anyway, the County cannot stop private growers under the state law as long as they keep to the 6 plant limit inside.

I’m sure Northern California is a whole different scene: They have been growing there outside for decades before it was legal. I’ll let some Northerner comment about it.

Alaska law was changed in 2016, we can have six plants per adult over 21 up to 12 plants. In your residence, you can possess the amount those plants can produce. In public you can possess up to an ounce.
They say they’re trying to treat it as alcohol/moonshine. I was trying to link the article but can’t figure it out

I’m not going to get into the nitty-gritty’s of the law but Maine is a legal recreational state since November 2016.

In Maine I can grow six flowering plants and have an unlimited number of seedlings.
I can keep for personal use the entire harvest from six plants (which seems quite a moving number).
Any of the 6 plants I grow outdoors must be labeled with my name and identifying drivers license number and the plants cannot be visible from a roadway.
It’s legal to have I think, up to 2 ounces on your person in the community but use/ingestion must be done outside of public purview.
Currently, the laws have not been created/passed that govern the sale/distribution of recreational marijuana so, it cannot be bought or sold at this time but can be "gifted."
There is a fully operational pot delivery service available in the state to non medical marijuana users that charges a delivery fee but the herb is free. Cops and legislators are aware and feel this service complies with all applicable laws.
Hope this helps.

The Netherlands. You can grow 4 plants in natural light. Growing more and/or under artificial light is illegal and the cops enforce the law (ask me how I know

). Dutch coffee shops tend to be a bit grotty, at least the ones I have visited. You can almost always consume weed on the premises. Loose weed is weighed out and sold, IIRC you can have 5g and expect no problems with the law. 5g is the maximum you can buy in one hit, the coffee shops can have upto 500g on the premises and can be shut down by the state for the smallest infraction. I never had any trouble wandering around with a J on the go, at least not in Amsterdam (got yelled at for jay walking though, go figure)

The rules were being tightened just as I was leaving, no coffee shops near schools and in regions close to the border you have to be a registered resident and be able to prove it before you can buy weed in a coffee shop. I think the French, Belgians and Germans are complaining that their citizens hop over the border, score and then head home

Washington state. Growing recreational weed is illegal (I guess the state really wants its taxes) but there are plenty of places to buy it. I’m not aware of a limit (there may be one, IANAL) & I could buy an ounce or more at a time without issues. Weed is sold in sealed packages and may not be consumed on the premises or in public. I think you may have a problem if you have an open package in your car but, again, IANAL

Mass. Growing recreational weed is legal and I can have 6 plants, my wife could have 6 too for a total of 12 on the premises. I can gift upto one ounce of weed and IIRC I can have up to 10 ounces on my premises. Initially it was thought that the rules for selling weed would be sorted out by now but that seems to have been pushed back to July.

I haven’t had a smoke wince I left WA in July, can’t wait for this crop to finish

It is wrong that any adult, wishing to do so, cannot grow a plant that came with the planet. It causes me distress to think about it. Why should anyone have that type of control over other people. It is our birthright to live our lives to their fullest.
The mj laws are becoming unenforceable( emphasis on becoming), and if a law cannot be equally enforced, it must be abolished.

@GreenThunder and @AmnesiaHaze I did some digging and finally found the state website you found. (Probably) Here’s the link for anyone else that wanted more specifics.

That’s more detailed (and official) than what I found, which was an ADN article. It does confirm the 6 plants per person not to exceed 12 per household. [I need a bigger home!]

I was looking for more official. @GreenThunder the real disappointer was only 6 can be flowering. So to stay “legal” that’s not very many, considering the amount of family consumers I have.

You know what’s sad @Covertgrower NY medical cannabis you can’t even smoke it! It can only be consumed in pills, edibles or oils, which is smoking it in its 100% pure form?!? Does that even make sense! You can’t smoke the buds, but you can press the buds or dissolve the buds with alcohol and smoke the oil from it!!!

I’m getting sick just thinking about how dumb that is.

So you can’t smoke the plant why? Lol just dumb

So to stay “legal” that’s not very many, considering the amount of family consumers I have.

If I had the space, my grow would likely overstep the legal line as well. Hubby and I both have plenty of family who would love to be supplied. Some of the closest will benefit but we don’t have the space for as much as I’d like to grow and share. My sis wants to move out of her apt into a space she can grow a little. I’ve showed her some of the discrete options I’ve seen but with annual inspections she’d rather not risk it.

That’s pretty crazy alright… it would almost make a little sense without the smoking oil. Not much makes sense in the world of politics

In one hundred years, when this is all history, it will be looked on as ridiculous.

On the other hand, there IS the idea that states should serve as the laboratories of any new legal issue, to see what works and what does not. That actually has some validity, but I think we are getting past that now with the most populous state in the union going full recreational and so much of the population favoring full legalization.

Sessions is about to discover that as he takes on a umpteen million dollar industry that has just started having banks and credit unions handle their money. It’s one thing to raid a dispensary and steal all their cash and weed. It is altogether different to take on a bank and start driving their customers away by confiscating accounts.

With wider acceptance and use of cryptocurrency, banks will mainstream the industry if they want to control the flux of cash. This should not even be an issue. It goes deeper than big pharma blocking things…man will stand behind stupidity, and hold fast to outright lies, rather than admit they made a mistake. I believe that is the reason churches that outcast gay people are losing…If even 25 yrs ago,the church admitted they were wrong about their interpretations, and welcomed all peoples, they would not be losing followers.
The church is wrong, just like the gov is wrong. They cannot control the masses with stupidity forever.

NY Times has an interesting article about how hard it is for marijuana businesses to get bank accounts: 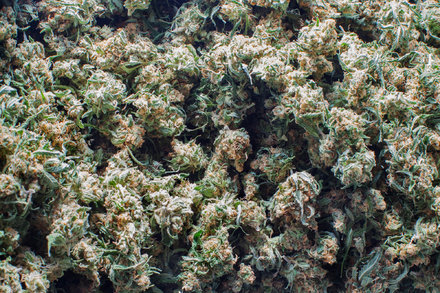 Where Pot Entrepreneurs Go When the Banks Just Say No

As the legal markets for marijuana spread, a small credit union is solving a big problem: what to do with all the cash.

If I understood it correctly, the woman running the weed friendly part of that CU risks going to jail for money laundering. It’s also clear a lot of businesses are at a lot of risk of being robbed.

Well that’s just it @DVM , all of our music advocates/popular billionaires/etc, and many many many others are blatantly publically opening commercial grows and dispensaries. It’s all done with their own money. They know what’s right for the people. So sad the banks are controlled by the federal govt like that. Banks cant have a say where that money goes to. The FDA has patent rights to cannabis, but its still illegal. Because they know it’s the popular choice of medicine and medical treatment.

Fl. may be able to grow their own meds now. I man went to court and the judge ruled in his favor.