Hey all!
I like to experiment on plants i can’t grow out for whatever reason…ive never grown photos, or indoor, only autos outside throughout summer. I had some unsexed and decided to try manifolding since im doing 5 indoor photo females. So…whatcha think? I did prune a little in the middle, mostly bc i removed growth sites i know wouldn’t grow anyway…i cropped at 4th node waited for an another 4th on both sides, cropped again. I stopped there. I was going to do it again but i got too stoned and got confused and gave up. I want to do it like a + instead of just half…ill see about a practice on another outdoor project lol.

Looking good to me. 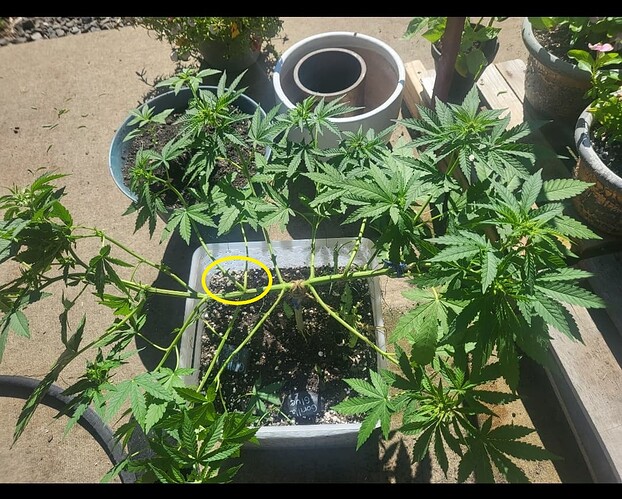 What is going on with the circled node?

In the middle? I split the stem at the junction by mistake. Some branches needed bandaids and i lost one branch. Not sure what you mean circled. I have lots of pots behind and beside it…lol

Ha, i get it, you circled!!! Lmao. I busted off that one beyond repair. I had it tethered to a post and forgot that i did that, and i yanked it. Broke the stem, if you look at the original split, it’s tied together with garden twine. Man, i did not know how hearty cannabis is! I have not been gentle and I’ve learned that the branches are very forgiving uf taken care of right. Its a male, i pluck off the sacs daily…i have no other plants going into flower. I want to do the manifod that looks like a plus sign and o also want to do it a 3rd crop but couldn’t figure out where and when. Once it took off, it TOOK OFF!!!