How to store my dried marijuana plants?

My harvest was considerably larger than I anticipated. What’s the best way to store the marijuana in the short- and long-term?

Marijuana’s main active ingredient is, of course, THC, which is located on the glands of leaves, stems, and flowers primarily on the female plant. THC is created on the gland membrane’s surface on the exterior of the cell. (With the help of a photographer’s loupe, you can see the glands quite clearly). In living plants, a water molecule attaches itself to the gland so that the THC is less active than it would be dry. THC achieves its highest concentration of psychoactivity when the plant is thoroughly dried.

When exposed to light, heat, and oxygen, THC tends to deteriorate. Thus, it’s not a good idea to store the dried marijuana in a large bowl sitting in the sun. It’s just as bad to put the marijuana in a baggie and then put it in a pocket. Your body heat and the abrasion from rubbing together will make the THC degrade substantially. The polyethylene bags also have a small electrical charge that interacts with and attracts the glands. When you get to the end of your stash, the baggie might have a cloudy residue of glands that you didn’t get to enjoy.

The best place to store your marijuana is in a wood, metal, or hard plastic container and not in a shirt or pants pocket. Keep the stash away from your body heat as much as possible.

A knapsack or purse might be good in terms of quality assurance, but not necessarily ideal for security. Ideally, you want to store the marijuana in a large sealed container in a freezer. Scientific research has shown that marijuana left in a freezer for one year revealed only negligible signs of deterioration. Fridges work the same way, but not as well as freezers.

Both freezers and fridges are effective because the marijuana is in a cold, dark area where chemical reactions are limited. It would be irrelevant to fill the container with an inert gas. A vacuum-sealed bag also works as a good way to keep buds at their highest.

Hi,What kind of tin or box is best for carrying my bud with me when I go out?. Thank’s.

I use a super small ‘Ball’ or ‘Kerr’ mason jar.

Anything that would be food safe and air tight is probably best.

Most Ziplock bags are not actually entirely air tight, the plastic has micro pores in it that leak the smell.

Thank’s for the help. How long will bud last in a mason jar with a humidity pack kept cool and in the dark?. What is the best way of grinding the bud?. Thank’s.

I read an archaeology article that said a mummy found buried with a bunch of cannabis, not that far from the ancestral home of all cannabis – near the Hindu Kush mountain range, that was over 2,000 years old. And for much of the cannabis that was in the center of the extremely large bundles, and the same conditions that led to mummification of the corpse – relatively mild temperatures and a very arid environment – would have made the cannabis very dry, and the stuff in the center of the bundles kept oxygen levels way down and obviously prevented light as well, anyway – to make a long story short, many of the archaeology students/assistants sampled the stuff and apparently it was still incredibly strong and potent stuff.

So as to how long in an air tight container after it has been cured and dried to about 50-60% RH, who knows?

Absolutely oxygen, heat, light and time can all degrade THC, but properly stored bud should last you as long as you need, lol. Of course rotate stock and always use the oldest stuff first, ha ha, This is a good problem to have, lol.

As far as grinding, it depends on personal preference. Some people use the commercially available aluminum grinders. I’ve seen many people use wire screen colanders, this used to be a preference of mine, lol, and I still do use something similar but it is small enough it fits in the top and in the mouth of one of the above 4oz mason jars.

I got a few brand new never used ones like the link below at a dollar store, then put on the top of one of the mason jars, I take a big round steel table soup spoon and shape all the screen to one nice smooth round bowl shape fitting the mouth of the jar. Later I’ll drop a small nug, or a few, and then use a stainless steel spoon again to crush the bud through the screen.

I also have a couple of aluminum and acrylic grinders, one just like the one in the link below. 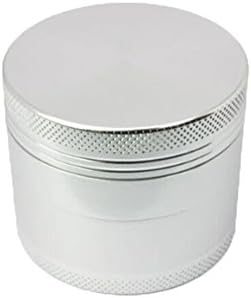 Hi, This information is great thank’s. Now that you mention it I remember hearing about the dig. Thank’s again.

Hi MacG, I bought one of the grinders, it works great Thank you.

I have one of those food storage vacuum sealers, that you use with vacuum seal bags quart of gallon, where it melts the plastic together, and I have the jar lid sealing setup that we use for dry beans and such in glass jars. I had thought freezing was determined bad I had read in a book, but now I am confused, but I will have to vacuum seal bud, cause I will have likely almost a pounds worth on my first grow, mainly cause the old plants of almost nine months got large,…very large, and then underside branches with bud all over got more light when I accidently over fertilized during bloom and damaged alot of fan leaves, …maybe a good thing, …more bud, too many small size on the under branches that then got more light. Then I have another harvest that will be ready in less than two months!

I like the jar method, I have alot of jars, once cured in the jars, then I will decide on the freezer method with vacuum packing. And I can’t pack them away with my “mummy”, errr, she is old and grouchy and probably would discover the bud tucked away in a cool dark place in her closet anyway, hehe.

I use the vacuum sealer also works great, just don’t suck all the air and smash the buds flat. I also use the Canning jars to cure everything. I think tomorrow I will take a pic of all the jars I have. As for freezing I do my edibles that way it does not seem to hurt it.
Tom