How much rudarlis % is in auto?

A customer has a question and I hope we can get some opinions on it, thanks

“Hey, I 100% want some ak47 but my only question that I wanted to know is how much rudarlis % is in auto flower strains or are they actually well in this case 50% indica and 50 % Sativa”

I’m no expert, but I wonder if the answer to the question has any real value? Breeders breed for specific characteristics. Thought experiment: you cross 100% indica with 100% sativa and come up with progeny. All of the “children” will be 50% indica and 50% sativa, right? But the children will have characteristics different from each other. Some characteristics come from mom; some from dad. The high from some may act more like a sativa, the high from others will act more like indica. Some will have higher THC; some lower.

“The genetics behind these new autoflowering strains that breeders are producing are generally not shared or if so only in very vague terms. This secrecy is done to keep others from producing knock offs of the strains, and more often, to obscure revealing that new strains are, more often than not, descended from the original Lowryder, which is often criticized as a substandard strain of low potency.”

“The newly produced strains of autoflowering cannabis have proven that they can produce quality medicine comparable with classical short-day strains. Breeders have reported THC content in the low 20% in some newer varieties while many varieties also have high CBD content.”

Autoflowering cannabis or day neutral cannabis varieties automatically switch from vegetative growth to the flowering stage based on age, as opposed to the ratio of light to dark hours required with photoperiod dependent/short-day strains. Many autoflowering varieties are ready to harvest in less than 10 weeks from seed. Dwarf varieties can have short stature while still giving decent harvests. The origins of autoflowering cannabis are still debatable. The strain Lowryder by breeder The Joint D...

These are auto blueberries. I think one of the is more rudaralis then the others. It just looks funny. 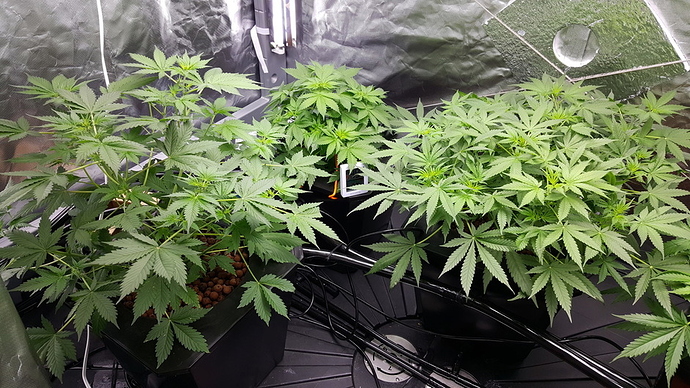