How many seeds should I drop?

Lowest occurance of phenotype expression is 5% as a general rule.

Meaning out of 20 seeds you have seen every phenotype expression(excluding the rare occurrence, for example cherry AK47 by serious seeds 1/100,000)

But, the pheno you want could be a male, so you need to germinate 40 seeds to see all of the phenotype expressions if you intend to breed.

This is according to Heavy Dayze on the podcast growing with the fishes episode 95 minute 36 42 seconds.

Now I need to buy 3 more packs of everything!

I’m not sure i agree with that guy all the way. Yes very big rabbit hole here. This highlights why people will ‘scrub’ their plants to get rid of things prone to mold,and fungal diseases, but then you hit the now it’s a gmo plant after going through the lab and the lab can process your plants and tell you if you’re on the right track to get what you’re looking for. This Is expensive but takes 5 to 8 years off your growing everything out and turn it into a 18 month project.
This will be good when more leaf tissue analysis is more available because the other expressions will be what terps,thc’s,and cannabinoid are in your plant if there’s a home version of the test i would definitely buy it. But until federal laws change so I can submit fan leaves through the mail and some wont even take it if o drive it to the front door. But in the end how dose a regular guy compete against a bigger one with money or a corporate one. Obviously we will become craft cannabis growers but going to need that testing for the final selection and breed out to strain stability of bx 7 times my eyes and nose can get me to a f4 but after that I will need to test for the best fem/male. Kevin Jorday talked to me and 5 other people at a convention for how we could achieve this and he said it took him a couple years before he realized that the lab is a great tool
But here’s one of his videos on breeding i know i probably got off topic but there’s so much that goes into play with this rabbit hole lol 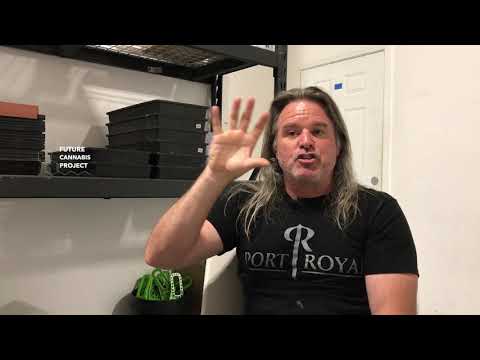 Well I’m not sure what I’m exactly looking for until I know what’s possible.

As an example, let’s say that I drop 40 seeds, two of the phenos tick all the boxes of what I think I want, But one of them has an unusually high amount of CBG which turns out is beneficial for whatever reason.

I believe his point is that if you want to see all of the phenotype expressions, the good, the bad, and the ugly for both males and females you drop 40 seeds.

Lab testing or not, if you don’t see it you/the lab won’t know it.

I imagine it’s possible to drop a single seed, breed it by another genotype/phenotype and take those to F100 and end up with something close to your goal, but by dropping 40 you have increased your chances of finding what you want greatly, this eliminating the need to go to F100.

Anyways, the dude is intelligent, has interviewed all the major breeders, and his rational is based in science. That is what caught my attention and made me want to share.

will be what terps,thc’s,and cannabinoid

Easily as important as THC. If I just wanted that I’d be fine but want the ‘entourage effect’ and a more flavorful experience. So definitely worth chasing.

Imo this going to depend heavily on what you’re after, and why. If you’re pheno hunting for mom to run sog type of grow, it certainly makes sense to drop whole pack of whatever you have, keep the best female and roll with it. That will provide you best plant out of pack so you have something to run. If you’re not 100% satisfied, you drop another pack in the meantime and work through those.

If you’re looking to do some breeding, then it maybe makes a little more sense to drop multiple packs. Your goal isn’t produce flower immediately, so no rush to get anything into flower. And the long term expenses justify up front cost of seed stock and taking the time to make sure you have a keeper.

You also need to consider filial generation of seeds you’re working with. Something that has been inbred several generations won’t usually have as much variation from seed to seed. This can also be good or bad, depending on what you’re looking for.

I agree with the lab being beneficial but… I can grow my seeds look for what I am looking for and SMOKE IT. I dont need a lab to tell me if I get high and if it is what I want. Then I can give it to multiple people to test and then get their reports and opinions.

Then after all that if I have found what I like and others like it, THEN at that point hopefully I can somewhat stabiIize it and then I can send it to a lab to know the stats of what I have.

When I grew my “God Weed” in 1979 it took me only about 2 years. I grew it out after I found it to F5 or so with quick flower and not much veg time. All from giving results to people to “test”(smoke) and it worked out well.

So I guees I am saying grow, test, grow, test, test grow and you will know. Then for clarification when everyone like what you have send your prodigy to the lab for analysis to know what you came up with.

Makes sense to me. You my friend have a lot of growing and smoking to do!!!

It will all come together.

Once we can legally ship seeds, leaves, and clones the breeding game will become a lot more cooperative!

I’m looking forward to having a harem of elite cuts, mine and what’s out there, then pheno hunt for a few males.

Having some solid females that I can become “intimate” with and know their subtle nuances would go a long way for me.

I’m just growing weed. If I like a particular plant I will keep a cut around for it. If I realllllly like it I will breed it to make seeds for myself.

If I get lucky and something amazing comes out of that, so be it. I don’t have any kids, so having my own awesome strain would be about the only legacy I might get to leave behind. Hehe.

But I am not going to seriously effort to create it. I am going to let the wind blow me and my garden where it may.

I am going to let the wind blow me and my garden where it may.

I always have this feeling that if I don’t drop all the seeds possible of a strain I will miss out on the “one” phenotype.