Blunts all day… joints are for taste lol

Wow they exploded over the couple days. Killing it brother

Exactly!! And if I wanted to taste cigars I’d be growing tobacco!!
I wanna taste weed, so I grow and smoke weed!
Plus, who knows what they’re slathering all over that blunt wrap to make it taste like blueberry or whatever. Ewww!
I already smoke cigarettes - which i need to quit, and I really only smoke joints if I’m going mobile or working in the yard. If I’m just chilling around the house watching a flick or something it’s bong rips all day!
Clean, easy and straight to the head!

Looking good @Indo_817 ! At 4 weeks old it won’t be long before you’re seeing flowers forming on the autos. I’ve got to transplant mine this week and get that tent settled in.

Yup. That is the beginning of flowering.

All thanks to you guys!!

@Tylersays you growing autos also? I heard it’s not good to transplant them

You can if you catch it at the right time. Mr @Tylersays got the hang of it by now

@SilvaBack203 ohh okay,being my first time growing auto I’m not sure what I’m doing yet maybe I’ll try that down the road I have plenty of beans to try new technics

It’s one of those things, some say yea, some say nay! I think I can do it gently enough so as not to disturb them too much, plus it helps getting the roots to spread quickly throughout the entire bag.
We’ll know later this week. I don’t want them to spiral in the cup so I’ll go a little early.

The 2 Northern Lights are rooting big time, the Gorilla Glue is slower. But she’s the one that got dropped on her head! LOL!

Ohh no you dropped one? So I was gona ask if there is a benefit to transplant but you just answered my question haha so on autos what size pots do you transplant to? I’m doing 3 gallon cus I read it’s good size for them 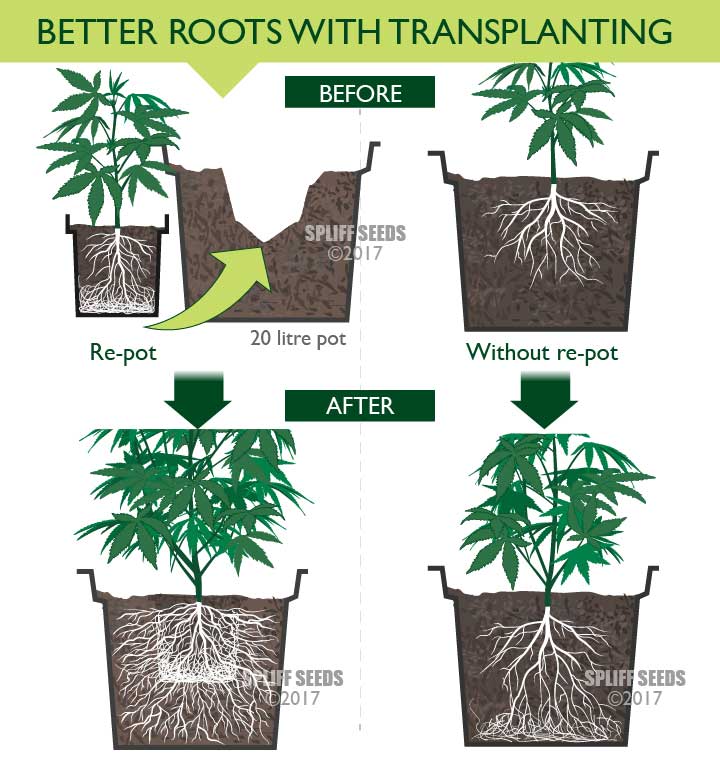 @Tylersays thank you for the info, will definitely try this out on my next grow

Stupid new keyboard was a piece of shit. LOL!

Yeah, I’m using 3gal bags for the autos. I figured for the shorter growing period anything bigger was a waste.
Plus I’m hoping it’ll help keep them a little more compact since I’m now using the 27"x27" instead of the 2x4. I should be able to make it work though.
It’s the 4 extra skunks that are throwing off the equation! LOL!

I’ve got my 2 5gal pots from my first grow on the deck. i want to pull them out of the pots and wash the roots clean and see how they grew in the plastic pot. i was terrible on underwatering first grow. Kinda why I’m digging the new mix I’m using, you almost can’t overwater.
The autos will be the first time in it from seed. But the clones are doing great so I’m hoping for good results.

@Tylersays so how many plants you growing in the 27x 27 ?that’s what I have currently .I’m trying to find your journal but I cants find it haha I think you had tagged me in it

Whenever I transplant I use mykos 2 help with shock

I’ve got 3 autos and the 4 left over skunk clones. LOL!
Ideally I would probably only do 2 autos and maybe 1 photo since you have more time for training it out.
Originally the SoG was gonna be in the 27"sqr but I couldn’t get the humidity and temp under control.
Now I have the opposite problem with humidity - to low. When it was packed full it was to high! LOL!
But I think the clones will do better in the larger tent and I can keep the autos small.
It’s the 4 skunk clones that are killing me!

My current journal is my original which covers all summer, outside and inside. The clones came from that grow so I just kinda continued in it.

When I get my autos up-potted I’ll kick off the journal for those.

@SilvaBack203 I’ll be using Mykos for root development too. Plan is to put a layer a couple of inches from the bottom, the mid-section and a inch or so below the surface. In addition to the cup hole. Also debating on giving the media a good soaking with Jacks and Mammoth P instead of just plain water for the transplant. The Mother Earth doesn’t have much of a charge like the FF soils. Probably just once a week for the first couple of weeks then every other watering for the rest of the grow.
I’ll probably be transplanting tomorrow, the NLs hit the bottom of the cup and are starting to wrap around and the GG has come right through the drain holes I drilled in the cup! It’s time!

@Tylersays so I want to start growing another auto but I’m afraid that I might not have enough room. So do you think I might be able to fit a third? I see @SilvaBack203 has a few growing in one tent but I’m not sure what size he said he has