Helping to spread the love and break even

Ive recently had a couple other local growers i know asking about my cloning abilities. My question is what is a clone worth at various stages. Im not opposed to hooking a friend up. But am trying to figure what a fair price would be for one in a solo cup. Versus say a 6 week clone trained and all but ready to flower.

Wow thats a pretty tough one and i have been in the same boat myself before. Lately ive just been teaching others and newbies. But back to the issue i would say $5 or so more than the seed cost for a small solo cup that you can see roots at the sides and bottom a little and price accordingly from there up. I think that would be more than fair for anyone interested in your service. Not so much for you if you just do one, but if you are doing them by the tray and multiple trays thats where you will shine

I purchased some clones back in March, while seeds arrived and germinated. Prices were $10-25 and seeds were $10.00. PNW area with fewer growers available (advertising and selling). The BananoBlueberry was interesting and worth a second purchase later this year. The real price determinant should be the actual variety/strain being shared (bag seeded or known genetics and quality the Mother produces)

Versus say a 6 week clone trained and all but ready to flower.

How much cost for 6 weeks of tent operation? Double that.
Trained and ready for flower, Double again.
Commercial rates being double the friends/family rate.
Selling can create unforseen issues.

Ya that was way back…these days id have to think on it a while…as legalization around me increases prices are falling on all flower product due to market being more and more flooded. I see this happening a while longer till there is a more defined separation of quality that supercedes quantity. By that time i think quality of the junk stuff should be on the rise at least some. Jmo

That seems like a good idea over all. I could definitely live with that.

Thanks for the input guys. Im cool with sharing, but im not trying to be Johnny apple weed

High times article 1977 place clone value at $100-200, for top genetics ($3000/lb rate then)
I would willingly pay $25.00 for a BANANO-Blueberry or as an experiment to introduce new strain to my inventory. However, now things are semi-legal and the last purchased clone had WA State size limits.

I have seen them around 20.00 in colorado dispensaries.

There are some very highly sought after genetics that could go for several hundred bucks. This paying more for the lineage that just the plant. I would say a healthy rooted clone $20-$25. From there larger you go is more significant investment into plants. Not only does it take up valuable space but also resources in light, nutrients, etc. I could see mature plants bringing decent penny.

I would also beware of getting jammed up selling plants. More specifically larger mature plants. There are some places they weigh the entire plant and could charge you for distribution of said weight.

I’ve seen tiny clones go for $10 each. You get the whole tray (30) and they’re around $5 each. Just a supply and demand thing. I’d imagine they’d be cheaper outside the prohibition zones.

not trying to be Johnny apple weed

Most great people dont seek to be recognized, they have greatness thrust upon them and naturally wear it well.

My clones go for a lot more… keeping in mind that mine is a very small operation… wait, we are not talking about cloned humans?

Nevermind, I’m definitely not cloning humans in my basement laboratory… that would be unethical.

I give clones away. My only cost is a small amount of soil, and a solo cup. The lights are on anyway, so no additional cost there.

My question is what is a clone worth at various stages.

“Reasonable” to me is $20 a cut (unrooted) and $50 for a clone (rooted). I would pay either price without a qualm, if I knew the strain specifics. If it’s bag seed, I’d cut both prices in half.

I was at the dispensary it was the artist tree and they had clothes going for 25 plus tax probably came out to 35. If they are teenagers and they already have 5 or 6 nodes which means you can top them You could probably get an easy $30 for sure 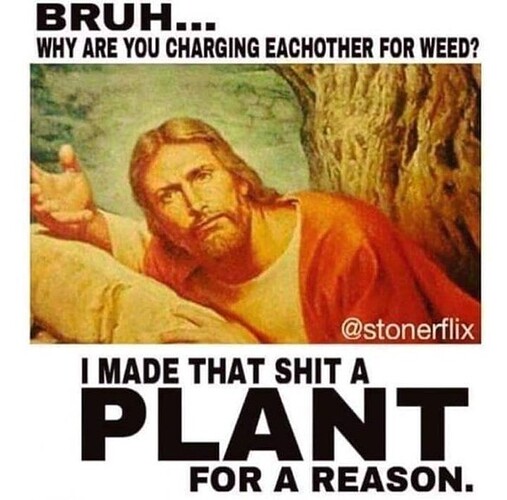 If christ had given us all the power to make a million meals outta 1 loaf of bread and a fish head or turn water into wine then I could see him being all butthurt we charge eachother for stuff, since that doesnt seem to be the case, perhaps just a few dollars for time and effort, as long as he gets his 10%. You know, 10% for the Big Guy… seems to be the going rate.