Doing a aeroponic grow of AUTOFLOWER NIGHT QUEEN, this will be my 3rd plant attempt. 1st was growing pains, 2nd seed grew into Male plant and now this one. My first real grow worth an actual effort in harvest.

I planted on Jan 22. its been 78 calendar days. On a plant that normally is harvested by its 60-90 days. However I missed a week w nutes and I broke it in veg, possibly stunting growth. All this is, plant held on. And looks good. HIGHLY RECOMMEND for newbies as it was easy to grow, did well with LST (I broke a main stem bending (newbie mistaker) plant & it STILL grew that cola, I starved w nutes and it still pulled through. (Aeroponic grow, on timers make u lazy and/or forgetful🤷‍♂️) still seems to be a good yield.

Anyway it’s almost time and I dont know if I should go a head and chop now or feed another week, then flush, and chop. Now being honest. It’s been a week of it using whatever is there. I havent refreshed nutes in 2 weeks. So I refilled reservoir today to flush, but should I add nutes and keep going? Here are several pictures. Some hairs are turning. Other colas are still white. This 60% thing is questionable. In addition to I’m about way over due on days according to normal growth charts for autoflower 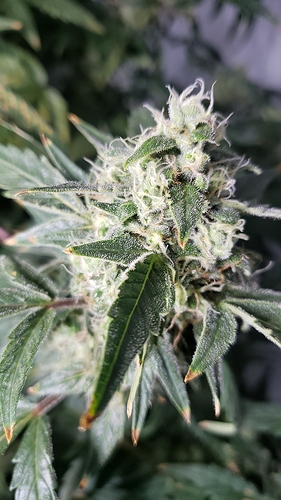 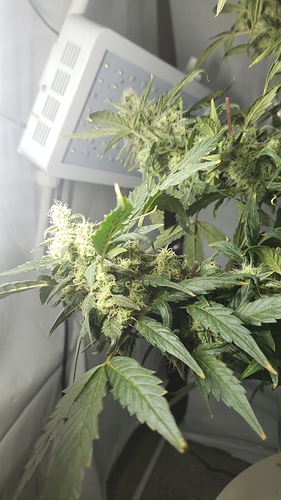 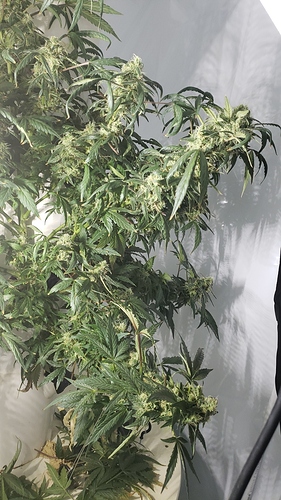 She’s not ready. She’s still got her final swell coming. For trich pics, make sure to get the trichs on the buds and not the sugar leaves. The sugar leave trichs will mature faster.

I would even guess you have 3-4 weeks to go. Pictures of trich’s need to be from the buds. You still have 90% fresh pistils. You want to have 95-100% orange pistils and very cloudy and a few amber trich’s. How long has it been in flower? What’s the strain?

Really?? Another month or so u think?? So much for 4/20 plans.
Strain is DUTCH PASSION AUTOFLOWER, NIGHT QUEEN.

Let me ask this too, bc i was preparing for harvest, I cut a lot (damn near all) those fan leaves. Exposing the buds more… should I be concerned w hermie? would this be like a 2nd deflower/prune? Or All of the above

You should count beginning of flower when the first pistils at the nodes form. Assuming feb 14 you flipped, and 7days after pistils formed you are at week 8 now. DP says 8-10 weeks before harvest. So at least 2 more weeks. You should get yourself a microscope or jewelers loop to look at the trich’s condition. You want mostly cloudy with a few amber. The unspent pistils is just a guide (95%+ should be turned.)

Actually a lot of growers cut leaves off all through flowering. You should be fine.

Ok cool. Thanks for feedback too! I’ll have to revisit pics and analyze closely to see if I can tell when pistols began. But thanks for that tip. Bc I was just counting from flip. As I believed pistol formation began when I switched.
I was thinking another week or so but still felt premature but didnt want it to be overgrown causing me to be stuck on couch for days. (The longer grows/harvest produce more body highs I’ve read?)
Any other tips ? My next phase is harvest so I’m open to suggestions on the best curing techniques

Welcome to the forum! You have a little bit yet for sure. Let those white pistils turn and then and then start checking your trichomes.

I refilled the nutes and adjusted the lights. We have another 2-3 weeks. I’ll keep everyone posted

Ok. Well I’m glad I waited. Thanks bc I can definitely see that “2nd swell” bobbydigital mentioned. I do LST and broke a stem. Here are updated pics and trich image attempts.

Probably will flush this week and cut. Dont want too much of a couch lock high! She looks good to me tho. Trying to gain opinion of fellow growers tho. I’m proud of myself. My first real grow to completion and it actually looks like something worth being in a magazine imo lol. Thanks for help. Tips. Pointers. Crew
20190421_152940|242x500 much of a couch lock high