So I got rained on… HARD… for 3 days.
However, I don’t know if this is from the rain or something else. I built a temporary shelter to keep the out of the rain, but trying to uncover them for sun and 2 hours later cover them for rain all day long, is a pain in the keister.

I’ve got 2 buds showing rot or mold or something. Of course, one of them is my biggest fat cola.

So my main question is what should I do;

Sorry to see that, bud rot sucks. Trash effected buds and do a budwash on the unaffected buds. 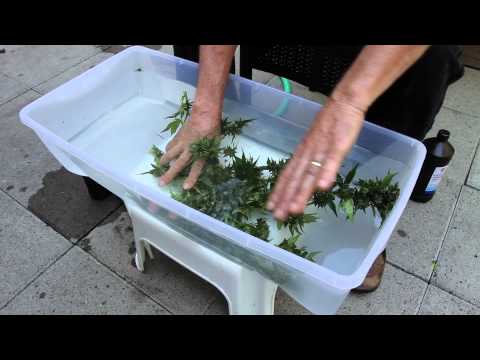 Your best bet is to remove the affected flower back to green growth, spray entire plant down with a strong peroxide mix (like 1 cup in 1 gallon) which will make leaves scruffy and dry but should not affect flower. Really wash it down and if you can; get some increased airflow. Remove all leaves you can afford to which will open up the plant, if you have a fan you can run outside I’d do that. If it’s in a container; bring it inside. And do a bud wash like @Hellraiser linked you to.

How close is the rest of the plant to harvest? You can chop the affected area and let the rest keep growing but you gotta keep a close eye on it daily and make sure you chop out every bit of that rot.

The main cola is 10 to 12 inches tall and only has 2 inches that looks like rot. Seems like I should be able to cut the rot out and use the rest?

That’s what I’d do. That’s a nasty bit of it but three weeks is long enough that if you can cut out the cancer and keep an eye on it at least daily you can try to get closer to the finish line before you harvest.

When you cut it out be sure to remove as much as you think you need to and then about 10% more. You don’t even want a hint of a spec of anything that touched that rot. Think of it like taking a little more than you need to now can help prevent having to take a lot more later.

Yeah cut out the nasty stuff that you can see and do the peroxide spray like @Myfriendis410 said to kill off spores and let it mature before chop, then do the bud wash.

If posible cut affected areas to avoid spread and infection in the plant .

this happened to me last grow. ended up trash one whole plant and a couple other colas. Luckily it wasnt a total loss. Those spores will travel and stay dormant for quite some time. I would wash those gloves, clothes everything else to be very safe. Hopefully you didn’t poke the rot with your gloves then touch other parts of the plant. follow the others advice and hope for the best.

Will it make a difference, or is there anything I can do different, if these buds will be used for edibles?

So… I come to the conclusion I have know idea what I’m doing.

As I trimmed out some more bud rot this morning, I found a tiny little caterpillar about a 1/4 inch long, in a little chunk of stuff I pulled off with tweezers. I’ve heard of them causing rot, but I’m not sure thats the only thing I’m battling.

I also found a section between a clump of buds with cob webs. (which could be the early stages of PM) I don’t see and black spots on leaves or any other signs of spider mites so I’m not sure if this is from the caterpillar or something else.

I also see quite a few of the caylax which are turn brown or black. Usually right at the base of the bud with rot, some just random.

I see so much conflicting info out there. Some say to spray the plants still growing with straight 3% h2o2 and others say 50/50 and others say a cup to a gallon of water.

What concentration do I use?

At the moment our forecast is a week of sun, then two weeks of rain. If I can get to the end of the week, I will probably harvest. They probably could use 2 or 3 weeks but I’m not sure they’ll make it.

Really making me consider a grow room where I can control the environment.

What concentration do I use?

This is entirely dependent on your situation. Start with the weakest solution and increase strength if it’s needed.

Caterpillars absolutely destroy flower: directly and by bringing disease into the plant. Likely you should have been treating for bugs weeks ago. No idea if your harvest will be worth anything.

Went to check on them and noticed poop on the leaves. Went just above the poop and started working open the buds. using this method I removed 3 more caterpillars!

Just got a sugar cane borer out of a bud… of course, the size of my thumb from the knuckle to tip, chunk of bud came with it.

So 3 species of caterpillar / worm and 5 total worms (so far) between 8 plants, with 4 plants effected.

Damn. Wish I could be more help here but pests are not my strongest suit. All I can say is I’ve been battling various types of caterpillars and worms in my veggie garden this year and I’m ready to go full nuclear option

If it’s bud rot you gotta toss that bud - technically it can still be used with a supercritical co2 extraction but I’m guessing that like the majority of us you don’t have access to that. But don’t smoke it and don’t make edibles with it.

Yeah, I cut out the sections with rot, and did an h2o2 wash with the bits I kept.

Even though we hard some hard extended rains, I’m think’n without those stink’n worms I’d be sit’n pretty.

I recommend next time running two products side by side for the entire flowering period:

The first is a bacterial strain called Spinosad: essentially harmless to humans and pets but kills insects in 5 days. I alternate between them for better coverage.

The Safer caterpillar killer is Bacillus Thurengiensis (BtK) and is another bacterail strain lethal to insects but harmless to humans and pets. Both can be sprayed up to the day of harvest.

I have searched but can’t find an answer, the pieces of bud I saved I a gave a peroxide wash and a few of them turned brown, mainly on the tips of the caylax. The leaves of those turned yellowish with black dots.

Why?
Are they useable for anything?