@TroubleMan You seem mostly in range, the taller girl can probably handle the higher ppm with no issues.

You seem mostly in range, the taller girl can probably handle the higher ppm with no issues.

Should I prune the yellow leaves from the short plant? 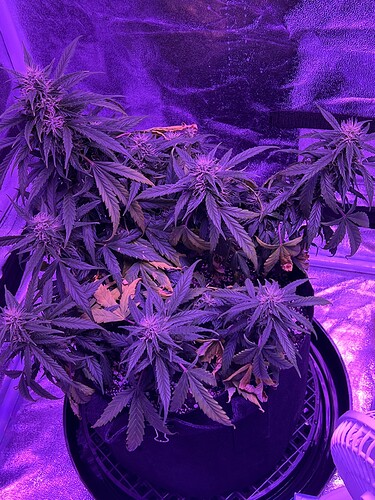 Awesome. They are both looking about like the numbers say.

Can we see the short one in regular light?

@TroubleMan I’d say yes, the plants already written them off so you can too.

Can we see the short one in regular light? 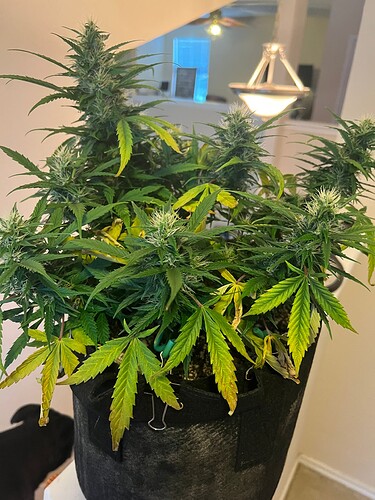 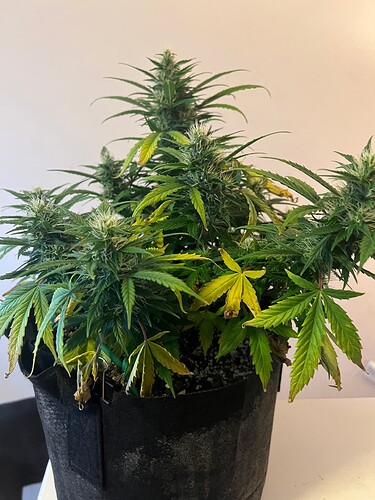 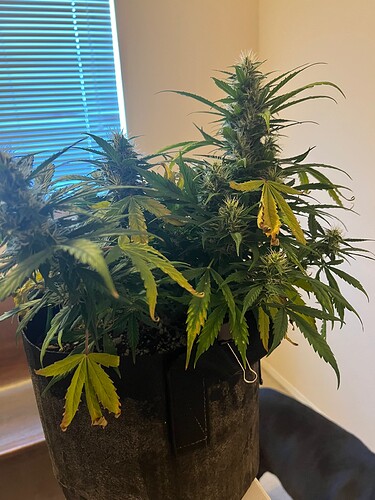 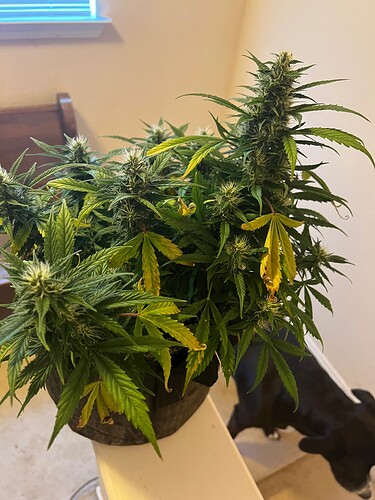 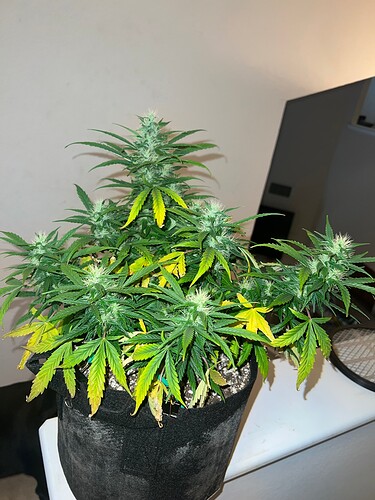 I went ahead and removed all of the really bad ones. Most came off by barely touching them. 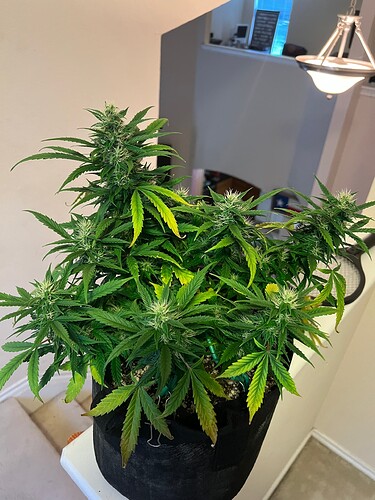 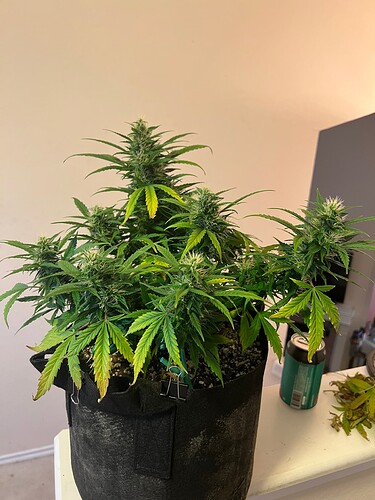 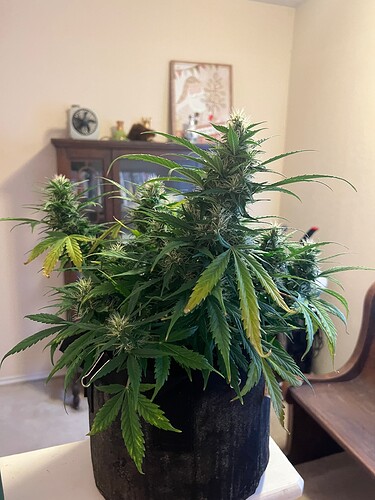 Solid deal. Anything that takes more then a literal tug, leave it be. Let the Bloom do it’s job and the spread should stop. Then u can pretty her up somemore.

She had the lower ppms right? Another feed maybe in her near near future lol

She had the lower ppms right? Another feed maybe in her near near future lol

I’ve had worse scenarios and the buds just came out killer still. Seems like whatever the flower wants it’ll grab from everywhere else where it can find it. These are gonna be fat monsters. .

I just watered both plants. Water only PH 6.5

Also the shorter plant has a lot more yellow leaves again. Looks like it’s still stealing nitrogen from other leaves. I purchased organic earthworm castings to top dress with or brew compost tea. But I’m worried it won’t be enough nitrogen. Should I use “grow big” and “tiger bloom”? Or will the worm castings provide enough nitrogen?

@TroubleMan have you looked at your runoff ppm’s? A tea would be a quick shot but your runoff numbers could tell you how hungry she is. She’s a dark green with slight tip burn so it may be P&K that’s she’s actually hunting for instead. You are building flowers now. Do you use CalMag or Epsom Salt?

Sorry if this is all repetitive

Do you use CalMag or Epsom Salt?

The ppms listed were my runoff ppms.

I don’t have CalMag or the other. I was trying not to use any nutrients bc I’m using living soil. But then I watered with unsulfered blackstrap molasses and the yellowing started on my short plant.

Then someone recommended adding tiger bloom for the nitrogen. It got better for almost a week and then when I went to water today it’s like it came back full force.

Short plant “runoff ppm 1581” “soil ph6.5” this is the only plant I’m concerned with because her buds look so good. The yellowing is the scary part. I’ll post some pics of both in normal light.

The tall plant with high “runoff ppm 2911” “soil ph6.5” hasn’t clawed anymore and looks healthy. But the leaves that clawed never un-clawed. But this plant no longer concerns me.

But I also read that 5-6 weeks in flower it can be normal bc the buds don’t require much nitrogen. That’s why I wanted to make worm tea bc it has nitrogen but much lower.

Those PPMs are a little high imo. Especially that 2900. The above is correct on the nitrogen and flower thing, ladies really don’t need as much nitrogen when in flower. And you keep saying living soil, I don’t think you have the concept of living soil yet to be honest. Maybe it’s the media your using labeled as Living Soil? If it is that then I suggest reaching out to that vendor and ask them for some advise on how to grow in that particular type of soil, they might have a help page or forum with folks just like you in similar situations. Those yellow leaves are done, your not getting them back. Good thing we’re growing flowers. Fuck the leaves.

Ya I’m using “Natures Living Soil Autoflower Concentrate”. You mix it with organic potting soil of your choice and use water only (no nutes) from seed to harvest.

I used their normal blend for my last grow (photo-bag seed) and had no issues using water only. That grow I fucked up with the dry/cure process. Plus they had bad genetics.

Those PPMs are a little high imo

Ya I’m def giving the tall plant (water only) from here on out. I might add CalMag to both plants next watering if everyone recommends it.

What pisses me off about the shorty is that the larger leaves on each budsite are what went yellow. So it doesn’t look as pretty as it should have.

Happens, especially in flower. They just get HUNGRY.

Friend of mine gave me an unknown lady, said it might be Blue Dream. I flipped it quick and got a descent yield considering how early I flipped it. And like your story… I messed it up in the curing process.

I was playing with the paper bag method. It sucks donkey (you know what). Sticking to the old reliable hang em from now on. I read and am seeing for myself with my Autos, on my 2nd grow with these, the first was outdoors. And am noticing that what’s reported is true, Autos are light feeders. Your soil is probably too hot. Nothing you can do at this point but maybe a transplant but that is really risky right now, especially in flower. I’d just ride it out with just water like you said. Your flowers look good from the last pic. 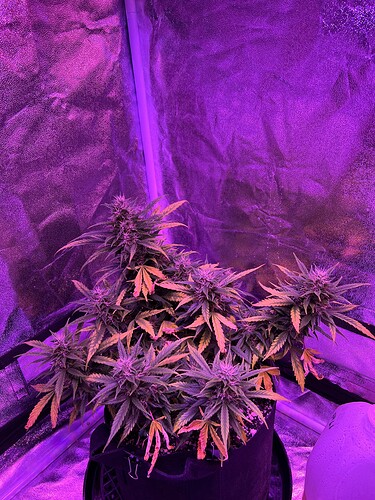 @TroubleMan I think I’m gonna stick to a natural fade out occurring here for you. Your flowers look phat and happy. I’m sure she probably wouldn’t complain if you gave her a little flower food though lol.