An HLG 260XL has been added - this thing is sick. I think I’m 100% going to be getting another quantum board to fill it out. I really hope I maximize it’s usage even though it’s my first run, I’d rather learn and fail towards efficiency I think… though any harvested medicine is kind of needed as well.

The new girls are taking off… They popped their domes (their leaves were pushing against them). I’ve arraigned it so that Esther, a GDP, is under the exhaust setup because she’ll probably be the shortest, though at 60" I’m sure my max light height is going to limit all of these plants, especially poor Caprica 6, a Purple Haze.

She looks good but Athena, a Purple Kush, actually looks like she has some kind of issue.

I’m referring to those little yellow spots, what do you all think? She’s also got some taco leaves.

Esther hasn’t been watered since 10/8. I have a soil moisture probe now but it was really cheap. It’s been bordering on dry/moist for the last 4 days. Today I gave her about 3/4 a solo cup of distilled water in a zig - zag pattern along the perimeter of the container. I sprayed her a little bit as well. I also misted the topsoil of the two new plants now that they’re without their domes.

There are some gnats here and there. I recently picked up some jack’s dead bug so I’m going to get that ready and murder them like the scum that they are. No mercy.

It’s such a personal thing to watch the plants grow, I’m really enjoying this, I hope I’m not stressing them out too much. I have to think the two newer ones have progressed so much quicker that they’re hopefully enjoying life. When the roots start really showing on the sides/bottom I’ll get their containers ready. I’m wondering if there’s much of a difference between a 3 or a 5 gallon? Esther is in a 3 gallon and I have a few more of them so I’d like to use them, maybe next time I’ll go bigger.

I hope you’re having a good day.

@kdawg @Roudy420 @merlin44 do you think it’s time to start training? I’d like to manifold her, I’m not 100% on how to count nodes to be honest - or how to manifold. I’ve seen a few different videos at this point and they all seem a little varied, then again I’m probably just nervous to start cutting her up and want some reassurance :).

Should I cut her at either of these two lines:

What will happen after? - After she starts growing again will I want to HST and bend her over so that when two branches start growing out I can keep them closer to the ground? Did I wait too long?

She is growing so fast, part of me does want to see what she does naturally, but not the part of me that needs to save money :). Her leaves are droopy a little. The moisture meter says her medium is dry in most places but has some moisture in some others, I will wait until it’s more uniformly dry but if she keeps drooping I’ll add some water to the more dry areas. I sprayed her leaves a little.

She sprouted a month and a day ago, I’m not sure if she’s doing well overall but she seems to have new growth all the time and she’s really thickening up. Hopefully she’ll handle the upcoming surgery well.

The 260 XL definitely added some heat to the environment, the temp is up a bit, around 80 with the humidity around 48-50%. Not quite ideal according to the VDP chart but they seem ok. I felt like I was losing the humidity game (with having to constantly refill the humidifier) anyway and I know Esther will push out water when she really starts drinking (she hasn’t had more than 16 ounces of water since she’s been transplanted).

I’m also going to have to move the light up soon, which may mean I have to increase it’s intensity and raise the temperature again, up until now I was doing 18/6 but I may switch to 6/2 just to give the environment a chance to cool off. I’ll see how long it takes to cool off first though to see if it’ll make a difference.

Personally I would go one node higher than your purple line. It is time to start training.
Looking good!
Others with more experience with manifolding may have better advice.

I would go with the purple line, as high up as you can so it leaves a ‘stubby’ stem behind.

Personally I would go one node higher than your purple line.

- Going with the purple line, or one above, is the next step the same? Essentially getting it to lay down, then when the two new main stems grow to their 3rd nodes, to defoliate?

but Athena, a Purple Kush, actually looks like she has some kind of issue.

How is Athena doing now? It looks like it might be early cal-mag deficiency. See the yellow ‘striping’ on the leaves between the veins? I had the same problem in my grow recently (I caught it before any spots appeared)

How I fixed it was to make sure to put cal-mag in every feeding. I also put Epsom salt into one of my watering. 1 Tbsp per gallon of water with the rest of whatever you put in your water. Water your plant with it, saving a bit for a spray, and spray it with the leftovers. Make sure you use plain Epsom salts, not any peppermint or lavender type of Epsom salts. 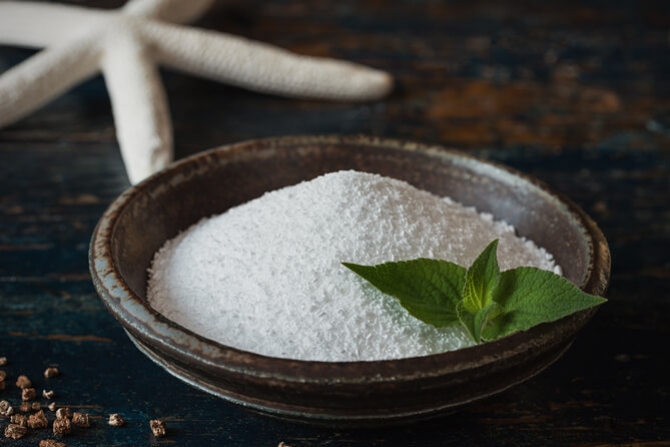 Epsom salts get their name from the spring water of Epsom, England. But what exactly do they do for cannabis plants? 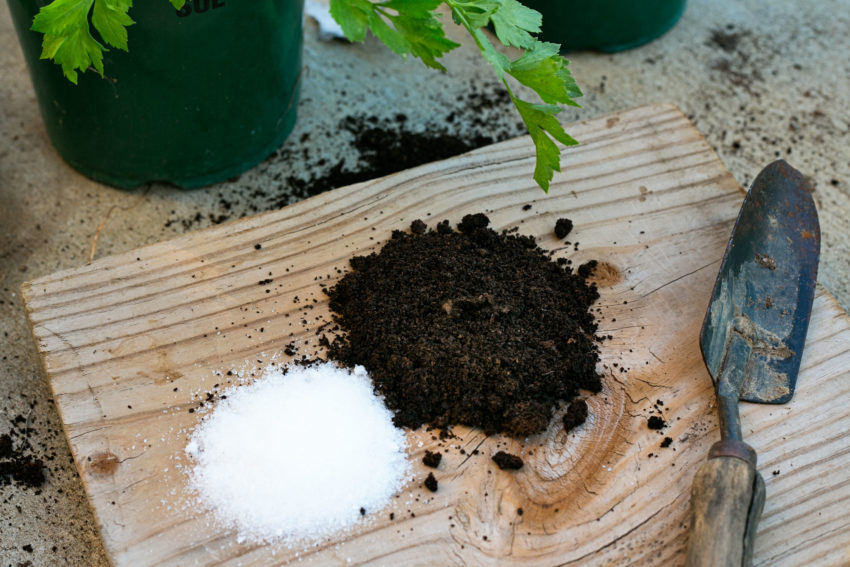 Cannabis Crop Tips - How to Use the Epsom Salts in Your Cannabis Garden in...

The Epsom salts are kind of hydrated magnesium sulfate, thay are a natural and eco-friendly supplement which will help you with your Cannabis crop. Here is how to use the Epsom salts in your cannabis garden.

After this treatment, just continue to use cal-mag (At least 1/2 strength) in every watering you do.

She’s big enough now to give a full feeding and watering for starters. Stick your finger into the soil down to your first knuckle. If it damp wait if its dry feed her. Lift the pot is the best way to tell if she needs water. Think about when you first put her in the pot full of soil and how light the pot felt before watering. When the pot feels that light she’s ready to water till run off.

If you want to mainline her you want to bend her over at a 90° angle just above the first set of toothed leaves. You can bend and top her at the same time. If you feel she’s not her healthiest get her there first. What are you using for nutes?

When you top her the first time (same for any plant) let her grow 6 sets of leaves then top her just above the third set. This ensures the plant has a good root base. From here on out try to not get any water on the leaves. Water acts like a magnifying glass and can cause burn spots if the light is to close or to high.

@Roudy420, it actually looks like both the new girls have some issues:

They’re both in Roots organic original - I haven’t been spraying them really a lot and it did recently get hotter in the environment, could that contribute to it as well? I gave them some water along the outer edge of the cups just now.

I think from them being in Roots they shouldn’t be hurting for nutrients at the moment, they are being transplanted on Fri/Saturday into their 3 gallon final pots. They will be in straight up Roots original organic, I want to get it to take me as far as it can before I add anything else… not sure if that’s working out.

I do have some Advanced Nutrients (bloom/veg/micro), maybe not the best but the price was right. I’m hoping that it’ll be OK when I need it in the more hot soil but I don’t really know.

@kdawg I’m not actually sure, she looks to have grown some smaller sets in between the larger sets… here’s a view from underneath:

As far as watering, I think I’m just afraid to over water. I gave her some now (just poured maybe 6 ounces out of a spray bottle with the top off). I’ll check back later with the meter. The next time she dries out I’ll record her weight and try to develop more of a feel for her. Her leaves closer to the bottom felt more dry to the touch, her newer leaves at the top felt different, more lively and kind of tougher.

For nutes, she’s in Roots on top and KIND on bottom, so no nutes should be needed for the grow.

I didn’t need nutrients for 7 weeks in Roots. I never worry about those first starter leaves. They’re just the leaves the plants use to start absorbing light as a seedling. Once they start with their 3 point leaves those single leaves aren’t really needed anymore.

Good to hear, and the newer leaves look nice, I think :).

I agree with the above. New growth is looking good. Looking up at the top of the 2 pics above it looks like the 3rd set is down one set from the purple line. The pic where the bug card is on the right side of the plant.

If that’s confirmed you want to cut at the red line. The top you cut off might be a good candidate to try cloning on.

I think so, I’m confused because of how it looks like some of the branches grew out, I moved some, hopefully this provides more clarity:

I’ve heard about letting her grow a bit to develop roots before topping for manifolding so that’s what I tried to do. I’m in a 2x4 already with 3 plants, I don’t think I have the soil to support 4 at the moment and really can’t spend anymore money. (I keep saying that, and keep getting different things… it seems like such a waste of good growth though, and it’s not like I didn’t love watching her grow, specifically these very leaves I’m about to chop!).

Ok let’s take a look at bending her over first. It may be easier to bend where the blue line is. If you try to pinch the very bottom is there any give at all or is she rock hard there? Try about an inch or so above the soil. Actually try the section just below the blue line. For mainlining the lower to the soil the better.

Can I get a wide shot of your tent with the 3 plants in it? I know 2 aren’t in pots yet. Let’s make sure you’ll have room to mainline.

I will have to bend her down as close as possible as I can - they’re in a 4x2, there are 3, they will each be in 3 gallon fabric containers.

Maybe a weird question, but if I top at the blue line, can I practice on it and then bend her closer to the soil?