I’m still working on my mushroom identification game but I see this one probably once a week around my property. Absolutely no clue what this is. Any help? 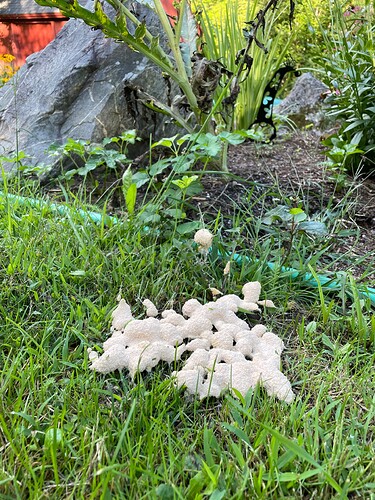 You led me down the right path

Fuligo septica is a species of slime mold, and a member of the class Myxomycetes. It is commonly known as scrambled egg slime, or flowers of tan because of its peculiar yellowish appearance. It is also known as dog vomit slime mold, and is relatively common with a worldwide distribution, often being found on bark mulch in urban areas after heavy rain or excessive watering. Their spores are produced on or in aerial sporangia and are spread by wind. The first description of the species was provi...

It really looked exactly like the pic you posted at first

Cool stuff! If it prefers areas that have need overwated it’s probably an anaerobic fungus like powdery mildew. Lactobacilis is good for mitogating things like that. You can’t eradicate a pathogen without eradicating beneficials as well. Pathogens are food sources for some beneficials. Homeostasis is a delicate balance. It’s fun learning though. Good work identifying it. I started playing around with insect inditification apps information and technology offers some great opportunities used correctly

That is called dog vomit fungus. Hydrogen peroxide will cure it .

On the idea of powdery mildew it blocks photosynthesis

Eh i don’t eff with the fungi in my yard. Sometimes they produce really cool stuff!

That is called dog vomit fungus. Hydrogen peroxide will cure it .

he’s right H2O2 will kill it. It will also kill the Benificial fungus!! Homeostasis is balance. If it isn’t hurting anything then why? Powdery mildew on the other hand! Again though lactobacilis won’t kill it completely. It will compete with it and reduce it greatly. Best to not create the anaerobic conditions to begin with and to have it so full of Benificial life that a pathogen doesn’t have a foothold to get in.