@MeEasy is correct, all fem seeds have a hermie trait some more then others are more resistant to hermies. Like Zkittles for instance is a high hermie trait strain very bad genetics… if you research some of these let’s call it pedigree (lol) and some weed has many many different strains linked into the final product…one would be better off in the long run
If your wanting to breed something with regulars get your fems that way and clone the hell out of what phenos and terps you like and go from there… Regulars are still available everywhere really. Heirlooms, landrace seeds are dwindling but also available… You wanna breed autos buy a land race Rudaralis u can still find that but that’s a hard one to get for most. I don’t do autos but going to buy some Rudaralis to keep in my stock for down the road. Most people think seed goes bad in five years not necessarily true I have some I popped 40 yrs old and some neville seed bank seeds from the 80s

Thanks @anon47338222 that eased my mind a little. I worry any time these scientists or even worse random pothead are breeding these plants back and forth with random bag seeds that were breed with a fem that was breed with their dog. I don’t want anyone to think I’m some brilliant mind in the breeding world I’m just a old stoner from the 80s worried about the plants I love

Lol 80s hippy? Lol funny, well there was some left over hippies in the 80s…I don’t claim to be a know it all just a long time grower new stuff out all the time like Leds never had Leds in the in day now even newer Leds like the 301H Leds are 16% more efficient then the 301bs most are using. Kind of like computers you buy a new computer and two yrs later it’s obsolete lol

Now if you have like one arm or something I apologize

I was to poor to buy weed so I started growing it. I lived in Redding CA and went to work for an asshole that grew weed up in the hills over there and that’s where I learned to be an asshole and how to grow weed

And Samsung came out with a press release that they found a 5% difference in the H and B diodes it had something to do with the coating on one of them but the light guy on here can’t remember his name but he said they made a mistake in their test and that there’s no difference between the two diodes. It was a two hour conversation because I made the mistake of quoting a article that said there was a 15% difference in them and I was quickly corrected and it went on for awhile between a few guys it was that guy dnr something. I don’t claim to know anything but if I read it in a couple places I start believing it to be close to true or right but this internet is just full of contradiction it’s hard to keep it straight. I’m just here to learn and try to be helpful in my journey

Well your doing fine bruh … Indid see that Samsung article on the two. But couldn’t recall what it said hahahah but read again there 16% so went with it but maybe it is 5%? I’ll have to try to read that again I know they were close but fact remains there more efficient no matter who you go by…Regardless of the facts something will come out better then those. Leds have evolved big time since they started making them full spectrum lighting. I’m still going with 301H in all my rooms but flower… to expensive to change out in there at the moment 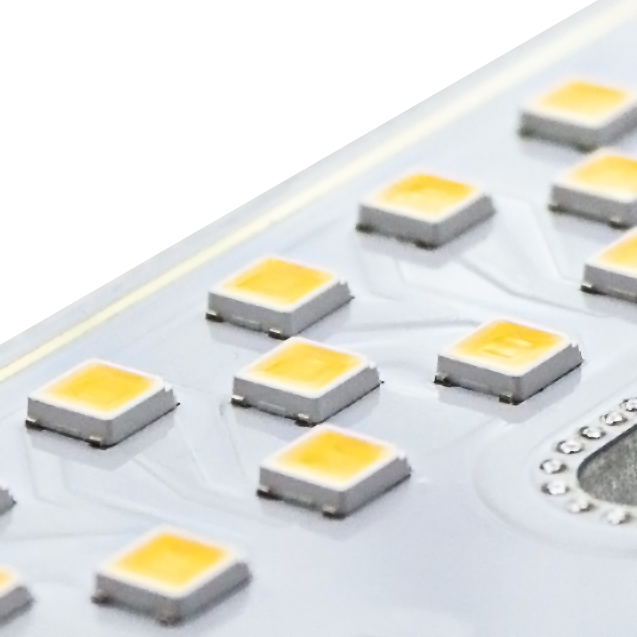 With grow LEDs the highest efficiency is always required. We compare Samsung LM301H vs. LM301B. The result is a surprise!

Therefore I correct myself to all.

Yep that’s what I thought too, but I was very quickly corrected and told everyone is wrong including Samsung themselves. It happens to me alot here if I don’t have my decimal in the right place I’m corrected
Edit = I’ll try and find the thread and tag you maybe you will get a little laugh out of it, I did

Naw u don’t have to ,shit we all make mistakes I’m not to proud to say so… Error made in good faith lol

I don’t know if you made a mistake honestly I don’t know what muchless who to believe. I hope you don’t think I was trying to correct you, I’m not that guy I was laughing about how intense the conversation got over a couple % of difference between 2 diodes just to prove

well nothing that really matters

Nooo all good bruh, I think the 6% is correct
Read on a lighting place web site the 16% and it did seem high when I read that because I read that other article but was awhile back and could t really remember. I’m getting old plus smoking to much weed lately

Growing (4) autos, 1 being Zkittles and I just noticed some seeds in my plants. They started to flower the 3rd week of November so I got about 4-6 weeks to go.

Wait so if i hermie a female it will be the same thing as the feminized seeds we are buying? Everyone makes it sounds like the worst thing to hermie, but thats a lot of money in seeds…sheesh

Yes a seed made by a female will have female seeds. It’s said that those seeds will be tainted by the hermaphrodite gene and they will make hermaphrodite plants. I don’t believe this I think that was made up by breeders who don’t want you to get free seeds

No seeds even from the same plant will be anything like a clone, a clone is like a twin they’ll share their DNA where a seed is more like a single child with siblings, so like people the children of the same parents can look, grow, eat, etc differently from each other. Two female plants can make seeds if one or both turns hermaphrodite these seeds will be feminized seeds, and when a male and female plant makes seeds they will be regular seeds somewhere like 50/50 male n female

I see, thanks for the quick response. I had found several seeds from some autos currently in harvest. I may grow a few of them out to see the result. I’m just concerned about creating unstable genetic lines. Learning as I grow, thanks again